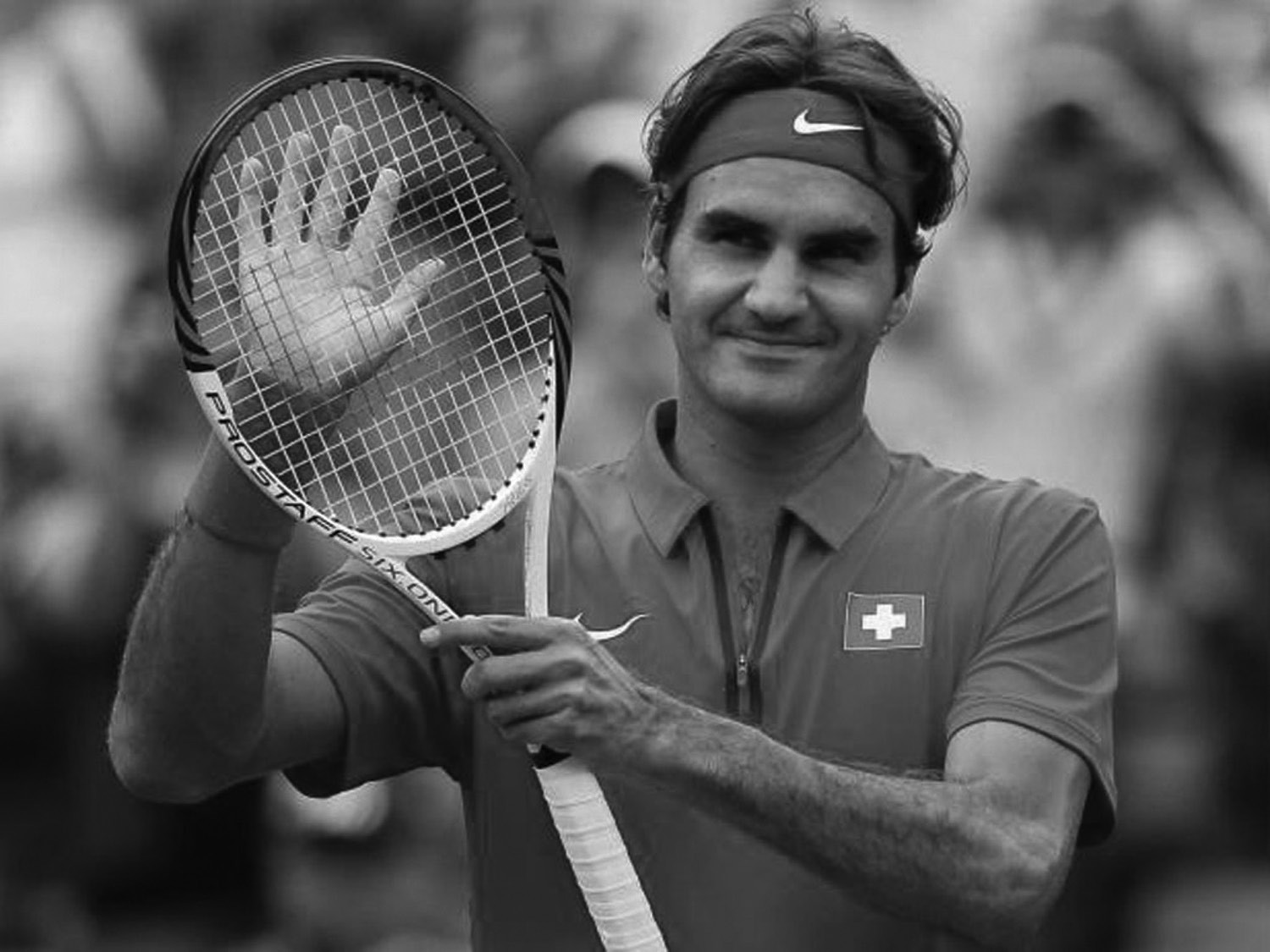 As great, as majestic as the 35-yearold Roger Federer has been for a majority of his career, no one expected this. I mean were talking off-the-hook, totally unexpected, almost surreal stuff here.

Having been away from tournament tennis since last July as he worked his way back from a knee injury and not having won a Grand Slam since Wimbledon in 2012, Federers prospects were iffy at best to make an extended run at the just concluded Australian Open.

Most experts figured that Fed might take a couple of matches against lesser lights but once he started moving through the draw with highly-regarded seeded players standing in his way, last years inactivity and lack of recent tourney experience would begin playing a huge part in undermining his chances. In the minds of many insiders and aficionados, the Swiss Maestro wouldnt be able to completely shake off the rust that was expected to adhere to him after such an extended layoff. Coming into the fortnight at Melbourne, Federer was considered a longshot at best to advance into the later rounds, let alone hoist another trophy.

Thats what makes his performance in Australia both confounding and astounding. Being able to recapture almost overnight his sublime game simply defies explanation. Its as if Roger flipped on a switch, turned back the clock and returned to his halcyon days when his talents were unsurpassed.

By outlasting his nemesis/friend Rafael Nadal in a riveting 6-4, 3-6, 6-1, 3-6, 6-3 duel in the Aussie final, Federer earned one of the sweetest and more meaningful wins of his career. With the victory, Roger added to his prodigious Grand Slam total and further cemented his case as arguably the sports greatest ever.

That this crowning success came at the expense of Nadal had to have made things even more gratifying. Theres no denying that the tenacious Spaniard had been a thorn in Federers side, having taken 23 of their previous 34 encounters which included eight wins in 10 prior major finals. In other words, Rafa frequently had his way with Roger and clearly had the upper hand in their head-to-head confrontations.

But Roger exorcised plenty of demons by outlasting Nadal in a match that both so desperately wanted to win. Nadal himself was coming off an injury plagued 2016 and like Federer, was not among the favorites to challenge at the AO. But Rafa also came alive Down Under and now looks poised to once again resume his rightful place among the tennis elite.

There were also great historic implications in Federers latest triumph. By capturing the AO for a fifth time, the Swiss added an 18th Grand Slam title to his already impressive ledger. By doing so, he created more separation between himself and the duo of Nadal and the retired Pete Sampras, both of whom stand at 14. Next on the list at 12 is the accomplished Novak Djokovic, the tennis superstar who has dominated the scene for much of the past three years though hes currently in the midst of a bit of a lull.

By securing another Slam, Federer has made the road all the more difficult for Nadal and Djokovic, the two men given the most realistic chance to someday eclipse Rogers total in the majors. Both Rafa and Novak will now have to do some incredibly heavy lifting in order to top Federer in this regard.

Federers path to his culminating victory on Sunday was incredibly testing in regards to the competition he encountered and the stamina quotient that he needed to expend. For starters, he was required to dispatch four Top- Ten players en route to the title. His matches versus Kei Nishikori, fellow Swiss Stan Wawrinka and the gritty Nadal all went the distance and were grueling affairs, each of which concluded with Fed digging deep into his reserves and finishing things off 6-3 in the final set.

In so many respects, the final between these two celebrated rivals matched the hype and justified the anticipation that proceeded it. At times, with breathtaking shotmaking often in evidence, this match proved to be an instant classic.

Federer got the jump early in the finals, ripping forehands, volleying with supreme touch and tossing in some precision serves that led to a 6-4 start. But then, Nadal immediately countered with a series of unworldly topspin forehands that helped him net the second set.

However, back came a revived Roger. A phenomenal backhand crosscourt shot for which Nadal had no answer set the stage. Moving with grace and fluidity, Fed then began producing winners off both wings and soon he rolled to a 6-1 success. The see-saw nature of the match continued when Nadal effectively worked both the baseline and net before delivering his own signature crosscourt effort that had him stretching to the max. That put the fourth set into Rafas column at 6-3.

So once again for Federer, it all came down to a moment of truth. But when Nadal raced out to a 3-1 advantage and was gaining in momentum, Fed was left with precious little wiggle room. As he had done on plenty of other occasions against Roger, Nadal seemed poised to bring the hammer down and put the Swiss away.

On the changeover, Federer received treatment on his thigh which only served to heighten the drama and intrigue. But Fed proved clutch by holding serve and when he broke to level the match at 3-3, the tone of the match and the mood of the crowd changed decisively.

Again Federer preserved while serving and then he fashioned another break, the highlight of which was a spectacular 26-shot exchange that saw him bludgeon a forehand winner down the line.

Now with the match, a chance to vanquish Nadal and the opportunity for making even more history solely on his racket, Federer wasnt about to blink. At 40-40, he spun an ace out wide. And then on match point, he took advantage of a short ball and drove a forehand beyond Nadals reach. But was the shot good? As he should have and with so much at stake, Rafa justifiably issued a challenge to what had been an in call. As both players waited in anticipation, Hawk-Eye went into action and soon the screen was showing that Federers shot had indeed clipped the line and with that verification, he was once more a Grand Slam champion. It had taken Roger exactly three hours and 37 minutes to once again climb atop one the games four great summits.

After he exchanged a heartfelt embrace of respect and admiration with Nadal at the net and went to the sidelines to shake the chair umpires hand, Federer returned to the court. Fully realizing the magnitude of what he had done, emotion overcame him and tears filled his eyes. He dropped to his right knee, had a moment of reflection and then rose to shake his arms victoriously before letting out with a scream of ecstasy.

After four and a half years in the Grand Slam wilderness, Federer was back, back where he belongs.

Where Fed goes from here will be fascinating to follow. Still quite the athlete and with his passion for the game seemingly undiminished, this marvel remains capable of big things on the court even at what is considered to be an advanced age. By downing Nadal, he became the oldest winner of a Slam since the 37-year-old Ken Rosewall turned the trick in 1972.

However, it was curious that Federer in his post-match remarks to the crowd couched his position somewhat, shying away from an absolute guarantee that hed be back in Melbourne in 2018. Read into that what you will, but thats the first time this reporter has ever heard Federer, even slightly, hint at retirement. The thought of Fed sometime soon vacating the scene is a sobering one for any true fan of the game.

But for the time being, Federer is still around to be enjoyed and revered. And in defying the odds, by winning when few if any believed that he had a ghost of a chance, Roger has burnished his legend even further. To say the least, Fed aint dead. Not even close. Just ask Rafael Nadal!