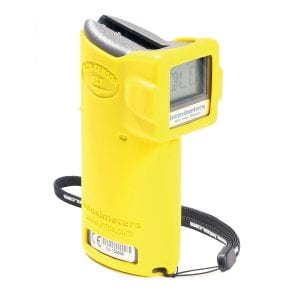 Intoximeter similar to the one used by Escondido police as part of the “Know Your Limits” program.

As opening Friday crowds of Cruisin’ Grand congregate along Grand Avenue, customers at bars will be asked if they “Know Your Limits.”  Although it might sound like a TV game show, this “game” has some deadly serious implications.  Because people don’t always know whether they have had too much to drink and whether it affects their ability to drive.

Lt. Mike Kearney—who runs the Escondido Police Department’s traffic division—and some fellow officers will be visiting local bars, like O’Sullivan’s or Pounder’s on the opening night of Cruisin’ Grand and offering to test customers with an intoximeter. That’s a device you breathe into that can measure blood alcohol concentration (BAC.)

When cops walk into a tavern, it’s not uncommon for patrons to be a little bit on edge, wondering what’s going on with this gaggle of police who have shown up. But then, the officers spot a table where the people appear to be friendly and they walk over.

Know Your Limits is a state-run program that provides grants to police departments through the Office of Traffic Safety.

“This is an educational program they have endorsed,” Kearney told The Times-Advocate. “To educate the public about the dangers of drinking and driving.” The EPD officers went to Huntington Beach—where the program originated—and trained with their team.

As Kearney describes this encounter with the public: “They go into bars and look for the first table that smiles at them. The officers see if anyone at the table wants to blow into the device.” Legally speaking, anyone who has a blood level of 0.08% is considered under the influence. “So where am I after a couple of beers? Blow into the device and find out,” said Kearney.

“We take officers who are friendly and want to engage with people. Once you get them talking, folks want to jump in and participate as well,” he said.

People obviously have a concern that such a program might be used to entrap them. “Some people are concerned that we’re going to use it to note what their blood alcohol is and we are going to watch them jump into their car,” said Kearney. “It’s not like that at all. We’re just trying to create a dialogue with folks. Most people don’t know what their blood alcohol is after a couple of drinks.” Several factors determine BAC. They include how many drinks you’ve had during a certain time; what you’ve eaten and your body weight.

“This is a positive contact with people,” said Kearney. “We don’t write things down for individuals. For grant purposes we write the number of contacts, and where they are from.”

They ask: “Based on how you feel would you drive? Yes or No.” if you answered yes and your BAC was .10% that was a poor decision. “We just write down the number of people and whether they believe they would drive or not and what their blood alcohol actually is,” he said.

People actually tend to overestimate how much they’ve had to drink, he says. “People feel very cautious about it. Which is understandable. No one wants to get under the wheel when they are drunk.”

The device they use in these encounters is the same intoximeter they use in field sobriety tests. If a driver is stopped and given the test and it shows he has a high level, the driver is required to go to the station to provide a blood sample or breathe into a calibrated machine.

But that’s not the point of visiting the bars. “This gives us an opportunity to talk about drinking and driving and other opportunities that are open to the driver,” said Kearney. “It’s really really a positive law enforcement encounter.”

The police at Cruisin’ Grand will also have their  “crash car,” that was involved in a DUI. “It’s a visual display of what can happen,” said Kearney.

The police of the “Know Your Limit” unit will be on Cruisin’ Grand between about 5-8:30 p.m.