Baltimore Snowball Presents will sponsor a tribute to Elvis Presley’s 1968 Comeback Show featuring Escondido rock trio, The Dukes. Comeback To ‘68 will be hosted by the Valley Center Library on Thursday, July 26 at 6 p.m. The concert is free and all ages are invited.

In addition to the concert, there will a host of classic cars and Baltimore Snowball will be providing free refreshments.

The Dukes are a family trio from Escondido. The band originally formed in 2006 as 180 OUT in York, Pennsylvania. As 180 OUT the band released two albums, Send down Your Love (self released in 2008) and Black & White (Thumper Punk Records 2012) and toured extensively throughout the East Coast.

180 OUT has performed at Creation Northeast, Cornerstone Festival, and The Extreme Tour among many others. Joe Dukes, guitar and lead vocals, was named songwriter of the year (unsigned) by American Songwriter Magazine in 1995. Daughter, Grace (Dukes) Schreffler is on bass and vocals and son Spencer Dukes on drums. This will be the first live performance for the group since going on hiatus in 2012.

The Comeback To ‘68 show will pay tribute to Elvis Presley’s sit down special that aired on NBC in 1968. 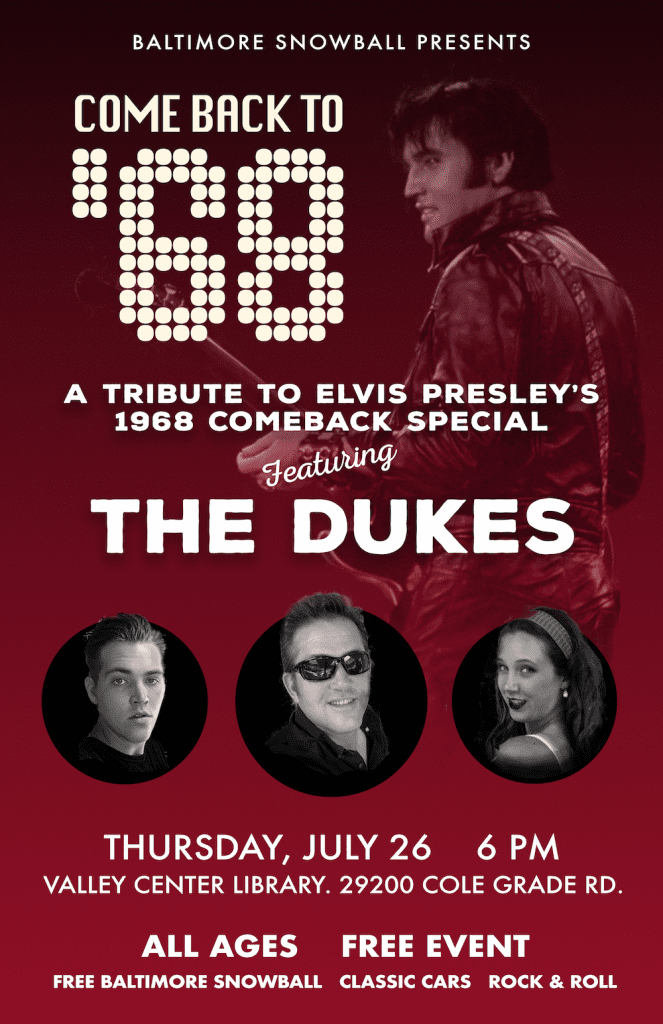