Elvis: Austin Butler does a great job as the charismatic king of rock 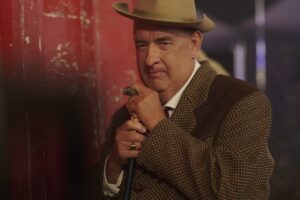 A song came on the radio the other day and I was excitedly telling my wife how much I loved it and how I hadn’t heard it in 25 years. She said, “I think you like music more than you do movies.”

I loved Cadillac Records, and it didn’t get the best reviews from other critics. The critics were even harsher to Across the Universe, a bizarre musical with Beatles songs, which I also enjoyed. And speaking of The Beatles, I’m the only critic that put Yesterday on my Top 10 of the year in 2019.

Now, that doesn’t mean I like every music biopic. My favorite band is The Doors, and I disliked the movie Oliver Stone made about them. And while I enjoyed The Buddy Holly Story, Ray, Walk the Line, and so many others…Judd Apatow did a great job skewering all the tropes you see in those types of films – the drug use, the women, and all the rest – in Walk Hard. So as an Elvis fan, I still went into this movie not sure of what to expect. It’s a Baz Luhrmann flick (Moulin Rouge, The Great Gatsby), so it’s going to be gaudy, crazy, and over-the-top.

At over two and a half hours, your eardrums might start bleeding, because it’s really loud and raucous. And one of the problems you realize right away, is the same problem you could have with sports films – you know the underdog team is going to win at the end. Wait, that might be a bad example, as we know Elvis didn’t win, but died on a toilet after doing a series of embarrassing performances in Las Vegas. It’s the fact that we know a lot of what this movie is showing us. Although it does still pack a punch to see him being fat and bloated, a sweaty mess, belting out the Righteous Brothers “Unchained Melody.” I had goosebumps watching it.

At least Austin Butler does a great job as the charismatic king of rock ‘ roll (and for those that say Little Richard was first, well…he gets some love in this movie with a great scene).

Since they turned down Harry Styles for the role, whom the studio would have loved for the name attached, Butler had to be good. It’s just a shame with Luhrmann giving us such incredible performance sequences, the scenes that aren’t on stage are severely lacking.

Colonel Tom Parker is played by Tom Hanks, under bizarre prosthetics and a ridiculous accent. It’s easily the worst role I’ve ever seen him in (and I kind of liked him with the weird accent in the Coen brothers movie The Ladykillers).

Olivia DeJonge plays Priscilla Presley, who isn’t given much to do but be bothered by his rock star lifestyle. The filmmakers smartly stayed away from the fact that she was 14 and he was 24 when they met. Now, Luhrmann did a version of Romeo & Juliet, but I don’t think in his version Juliet was 13, when Shakespeare wrote it. Luhrmann is certainly no Roman Polanski.

So while the dialogue and slower scenes are lacking, most people are going to see Elvis for the song and dance numbers. I’m the only critic that complained about Top Gun Maverick because it only worked when they were in the jets, and this only works on stage. At least you also get to see Kodi Smit-McPhee (The Power of the Dog) play Jimmie Rodgers, Gary Clark Jr. play Arthur “Big Boy” Crudup, Yola as Sister Rosetta Tharpe, and Kelvin Harrison Jr. as B.B. King. If you don’t know that roster of singers, you should see the movie and become educated. If you do know them, you should see this movie because they’re great in it. It’s just a shame the rest of the movie couldn’t be better.

Josh Board is a member of the Critics’ Choice Awards, has been reviewing movies over 30 years, and can be heard every Friday morning on KOGO 600 AM.