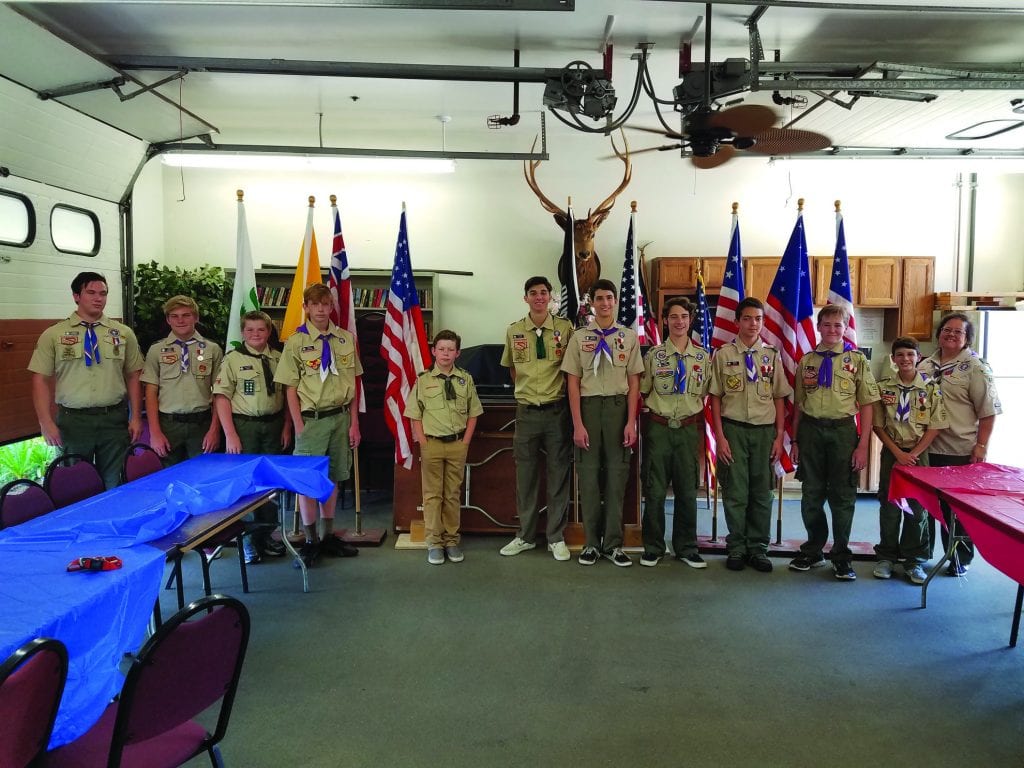 Members of Boy Scouts of America Troop 669 of Escondido present the flags of America, starting with the “Pine Tree Flag” of 1775 through the 50 stars and 13 stripes of the modern-day flag. The ceremony also honored the black and white “POW-MIA” flag, remembering those who were prisoners of war and who remain missing in action.

Local Boy Scouts and members of the Benevolent and Protective Order of Elks Lodge No. 1687 of Escondido gathered June 14 to honor the flag of our nation.

Members and officers of BPOE Lodge No. 1687 and members of Boy Scouts of America Troop 669 of Escondido participated in the annual Flag Day Ceremony.

During the annual ceremony, Exalted Ruler Steven Wagstaff led the ceremony. The ceremony included a history of the flag.

Following the founding of the Jamestown Colony in Virginia in 1607, the flag of England represented the people of America.

By 1775, the Pine Tree Flag, a white flag depicting a green pine tree, was adopted for all ships of the American colonies and it was the flag that was carried by the Continental armies during the Battle of Bunker Hill. From 1776 to 1777, the southern colonies used the Snake Flag, a yellow flag depicting a black, coiled snake.

By the end of 1775, the Continental Congress began to discuss adopting a single flag, which would represent all 13 colonies. The congress agreed on a flag with 13 alternating stripes of red and white, with a blue field in the upper corner containing the red cross of St. George and the white cross of St. Andrew. This flag was called “The Continental Colors” and “The Grand Union” flag.

On June 14, 1777, the Continental Congress chose to adopt a flag that was more representative of the new country of America. This flag should consist of 12 stripes of alternating red, white and blue, and 13 white stars on a blue field. In May or June of 1776, a committee commissioned Betsy Ross of Philadelphia to make a flag based on the stars and stripes design.

This flag was first flown at Fort Stanwix, also known as Fort Schuyler, near Rome, New York on Aug. 3, 1777 and came under fire by British and Native American Forces three days later, during the Battle of Oriskany.

By 1795, two additional stars and stripes were added to the flag, representing Vermont and Kentucky. The “15 Stars and Stripes” flag was used during the War of 1812. Contrary to popular belief, it was this flag, and not the “Betsy Ross” flag that was flying over Fort McHenry Sept. 14, 1814. This flag was seen by Francis Scott Key, who was so inspired, he wrote the four-verse poem, which would later become our national anthem.

On July 4, 1818, the Continental Congress declared that the number of stripes of the flag should remain 13, and the blue field should carry one star for each of the 20 states in the union. A new star will be added for each additional state.

During the Ceremony, the Elks also honored the black and white “POW-MIA” flag, to recognize the plight of those members of the Armed Services who were prisoners of war and those who still remain missing in action.

The History of Flag Day

The Fourth of July was traditionally celebrated as America’s birthday, but the idea of an annual day specifically celebrating the Flag is believed to have first originated in 1885. B.J. Cigrand, a schoolteacher, arranged for the pupils in the Fredonia, Wisconsin Public School, District 6, to observe June 14 (the 108th anniversary of the official adoption of The Stars and Stripes) as ‘Flag Birthday’. In numerous magazines and newspaper articles and public addresses over the following years, Cigrand continued to enthusiastically advocate the observance of June 14 as ‘Flag Birthday, or ‘Flag Day.

In 1894, the governor of New York directed that on June 14 the Sag be displayed on all public buildings. With B.J. Cigrand and Leroy Van Horn as the moving spirits, the Illinois organization, known as the American Flag Day Association, was organized for the purpose of promoting the holding of Hag Day exercises. On June 14th, 1894, under the auspices of this association, the first general public school children’s celebration of Flag Day in Chicago was held in Douglas, Garfield, Humboldt Lincoln, and Washington Parks, with more than 300,000 children participating.

The idea of a Flag Day Service was first suggested to the Elks Order by the then Grand Exalted Ruler at the 1907 Grand Lodge Session in Philadelphia. Of the dates submitted for consideration at that time, June 14 was adopted by the session and was called “Elks Flag Day.” The following year, in Dallas, the Grand Lodge approved a ritual for the Flag Day ceremony. The 1911 Grand Lodge session at Atlantic City made the observance of Flag Day mandatory for Subordinate Lodges by the adoption of Section 229 of the Statutes: “It shall be the duty of each Subordinate Lodge to hold the service known as “Flag Day Services” at the time and in the manner prescribed by the ritual of the Order.”

Franklin K. Lane, Secretary if the Interior, delivered a 1914 Flag Day address in which he repeated words he said the flag had spoken to him that morning: “l am what you make me; nothing more. I swing before your eyes as a bright gleam of color, a symbol of yourself.”

Inspired by these three decades of state and local celebrations, Flag Day – the anniversary of the Flag Resolution of 1777 – was officially established by the Proclamation of President Woodrow Wilson on May 30, 1916.

While Flag Day was celebrated in various communities for years after Wilson’s proclamation, it was not until August 3rd, 1949, that President Truman, himself a member of the Elks, signed an Act of Congress designating June 14 of each year as National Flag Day. The Elks were the first fraternal organization to celebrate Flag Day, and made this ceremony mandatory years before the date on which the observance became a nationwide practice by legal decree.