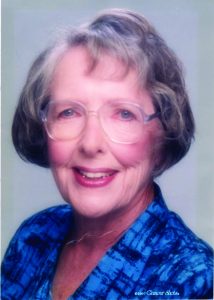 Elizabeth Louise (Lees) Pinter had a love of travel, education, and arts and languages that made positive impacts on both her life and the lives of those around her.

Although Mrs. Pinter was born in little Weleetka, Oklahoma, degrees from University of Oklahoma and Columbia University (NY) in Journalism & Latin American Studies enabled her to visit nearly every country in Central and South America. Her travel expanded to countries all over the world when she met the love of her life, Anthony Pinter, and joined him to lead Study Abroad Inc., developing international programs for educational institutions, first in New York and then in Escondido.

After Anthony’s retirement, Elizabeth became more directly involved in education as an associate professor of multicultural studies and graphic communications at Palomar College. Many community newsletters benefited from her bilingual assistance.

Mrs. Pinter cared deeply about Escondido and all of its citizens.  She enjoyed escorting new residents to the library, where she was known as a friend, volunteer, trustee, and promoter of outreach programs such as Embajadora de la Biblioteca. This commitment to access prompted her to serve as a trustee of the California Library Association Trustees and Commissioners, acting as its president in 1995-1996.

All of these efforts and more led the Escondido City Council to honor Mrs. Pinter with the Cultural Diversity Award in 1998.

She spent the last decade of her life near her daughters, first in England then in the San Gabriel Valley.  The family is grateful for the care provided by the Silverado Sierra Vista Community.  Survivors include her daughters and son-in-laws Claudia and Jim Pinter-Lucke and Stephanie and Ian Bellows, and grandchildren Eleanor and Simon Bellows.

No service is planned, as was her wish.  The family encourages donations in her honor to the Escondido Library literacy programs and the Center for the Arts education programs.