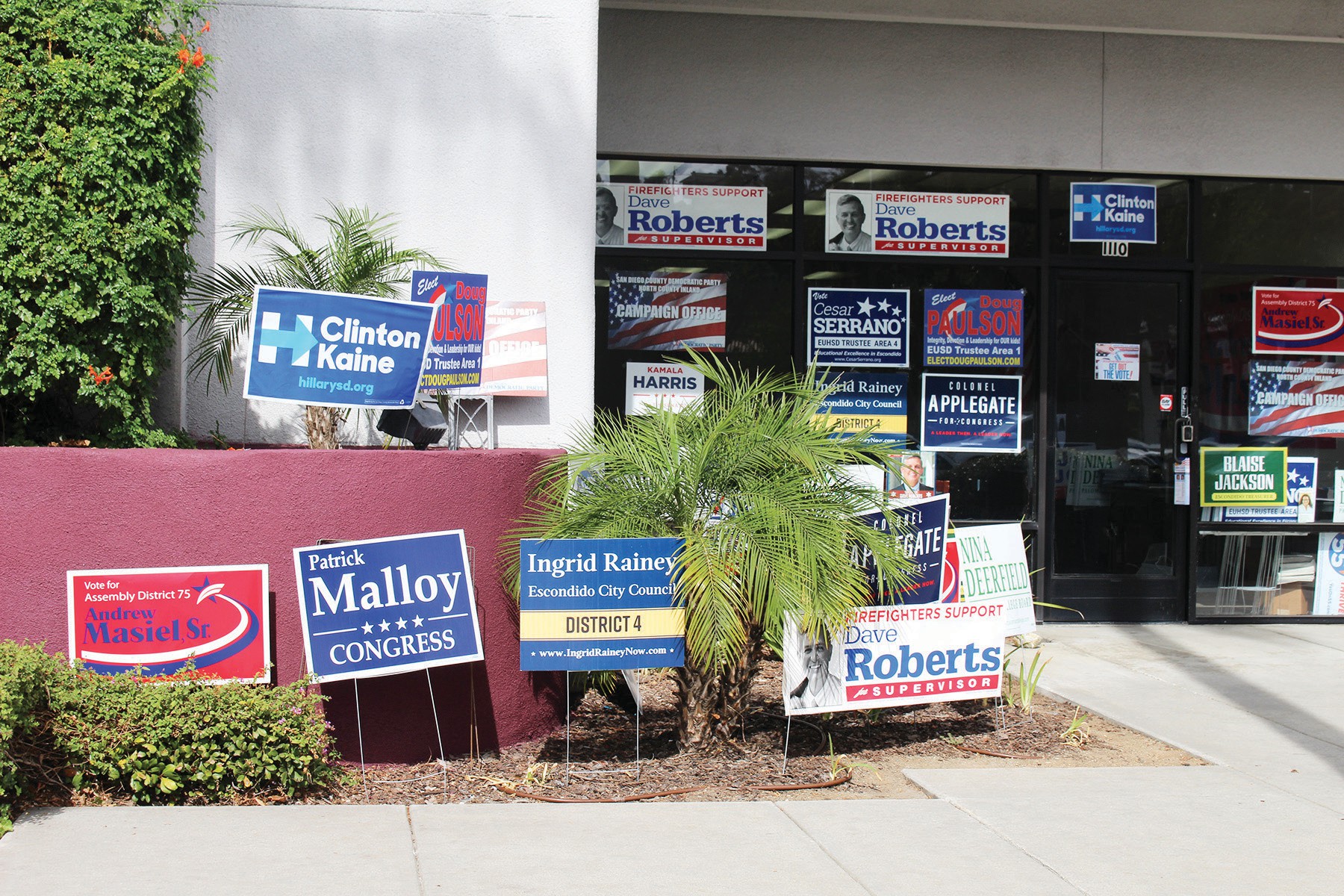 The front of the Democratic headquarters in Escondido, which is in the Plaza Las Palmas next door to the Chuck E Cheese restaurant at 1126 W Valley Pkwy.

It’s about a week from election day, which means that it’s time to play “How much can I slime my opponent?” with the expectation there won’t be enough time to answer the accusation.

Most people are probably not following this stuff, but for you aficionados of innuendo, here’s the latest.

Opponents of incumbent Mike Morasco (but NOT his opponent for the city council, Ingrid Rainey) earlier this week released information that an examination of his financial disclosure papers indicated that Morasco had received donations from three so-called “puppy mills,” and accused him of funneling some of the money into donations for other candidates in the city elections.

Initially the Times-Advocate was informed that Morasco had received $10,000 from three different dog breeders based outside of the city. Morasco said that his campaign actually received a total of $3,500.

According to JenEve Slater, Campaign Compliance Group, Inc. out of Irvine, “Only the below donations were received:

“These three are affiliated entities under FPPC law so the report shows $3000 for the calendar year and cycle to date.”

Asked why out of town dog breeders would be interested in donating to his campaign, Morasco said that the donations were unsolicited. He said he supposed that the reason he was the recipient 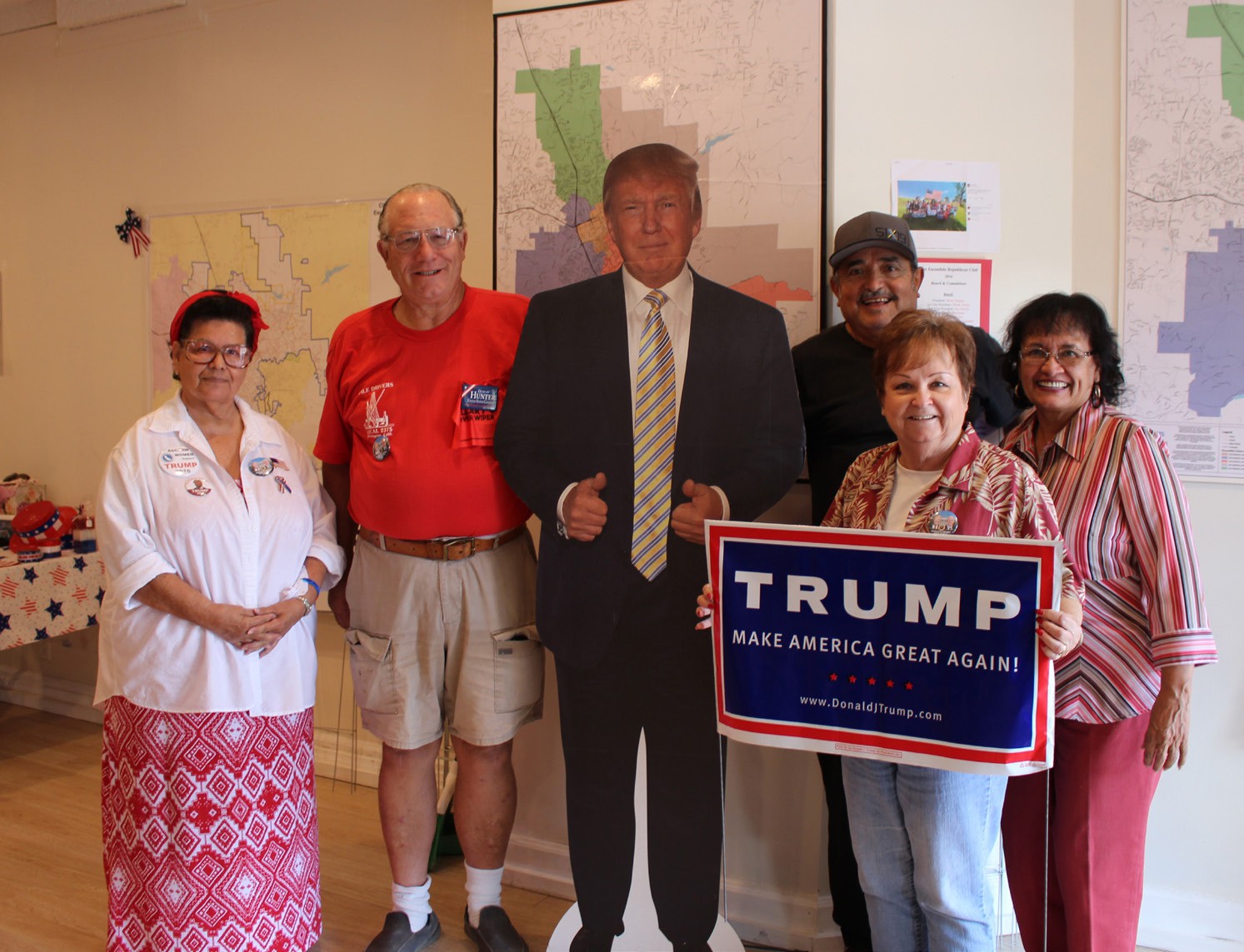 Volunteers at the GOP Escondido headquarters pose with the party’s nominee, who, miraculously managed to drop by for a visit just as we showed up for a photo. The candidate ended up being less multidimensional than we had been led to believe.

was that in the past he has expressed the opinion that if such businesses met state and federal standards that he was not prepared to support a law outlawing them in the city.

“I’m a free enterprise guy,” he said. “I will always vote my conscience for how I think it will benefit the city, not based on donations that I receive. I don’t believe there is any reason for us to get involved.”

Now we go to the treasurer’s race, which our sources tell us is becoming very nip and tuck, with the three top candidates being Doug Shultz, Ryan Clark and Blaise Jackson. Our sources tell us that they are so close that very little separates them.

Earlier in the week Shultz sent the Times-Advocate an email in which he said, “Mr Jackson and Mr. Clark both seem to be talking about integrity lately and that brought up a few questions. I found out that Mr. Jackson took his real job title off of his ballot statement. Escondido’s statement www.escondido.org/Data/Sites/1/media/PDFs/ Clerk/2016INFORMATIONCandidatesFiling.pdf vs the official statement that was printed on the ballot just says “school board member” page 31 –www.sdvote.com/content/dam/rov/en/ election/201611candlist.pdf.

“It would appear Blaise could be trying to deceive voters. 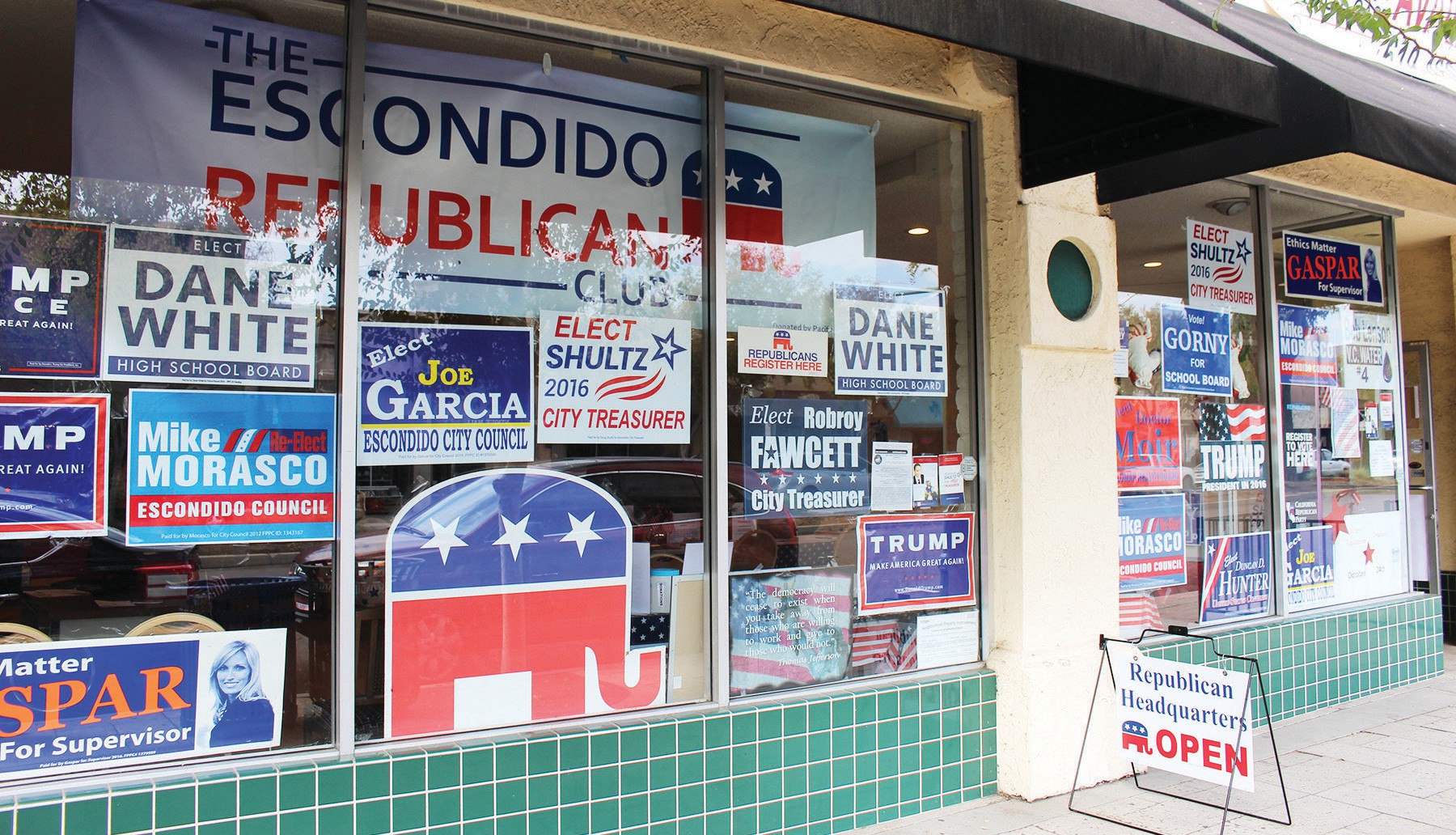 The storefront office of the Escondido Republican Party on 142 Grand Ave. (next door to Swami’s restaurant.) The storefront window is festooned with various state and local candidate placards.

Shultz said he had been told, but did not himself witness two young men near the Westfield mall putting signs in illegal spots. But then he videoed someone who fit that description putting up the signs.

His signs were definitely covered by those of Clark.

Shultz said, “I was shocked that Mr. Clark’s signs had been placed directly in front of mine completely obstructing the view. “If he (Clark) is going to run on ethics and integrity, he better lookup the definition.”

Clark, informed of Shultz’s accusations, told The Times-Advocate: “I do see the picture of one of my

signs which does appear to be obscuring another. The video supplied appears to show one of my signs being placed next to Mr. Shultz’s sign at a different time/location, which would not be in any way obscuring his material. These yard signs are problematic all around. I’m having signs get stolen within hours of placement, even from a friend’s front lawn. So, while I do see an image of one of my signs appearing to obscure another, what I don’t see is who performed that action. In the same vein, I don’t have video capturing the person(s) who have been removing my signs while leaving Mr. Shultz’s signs alone–but it does appear that Mr. Shultz or members of his team are camping out watching for my signs to be placed. 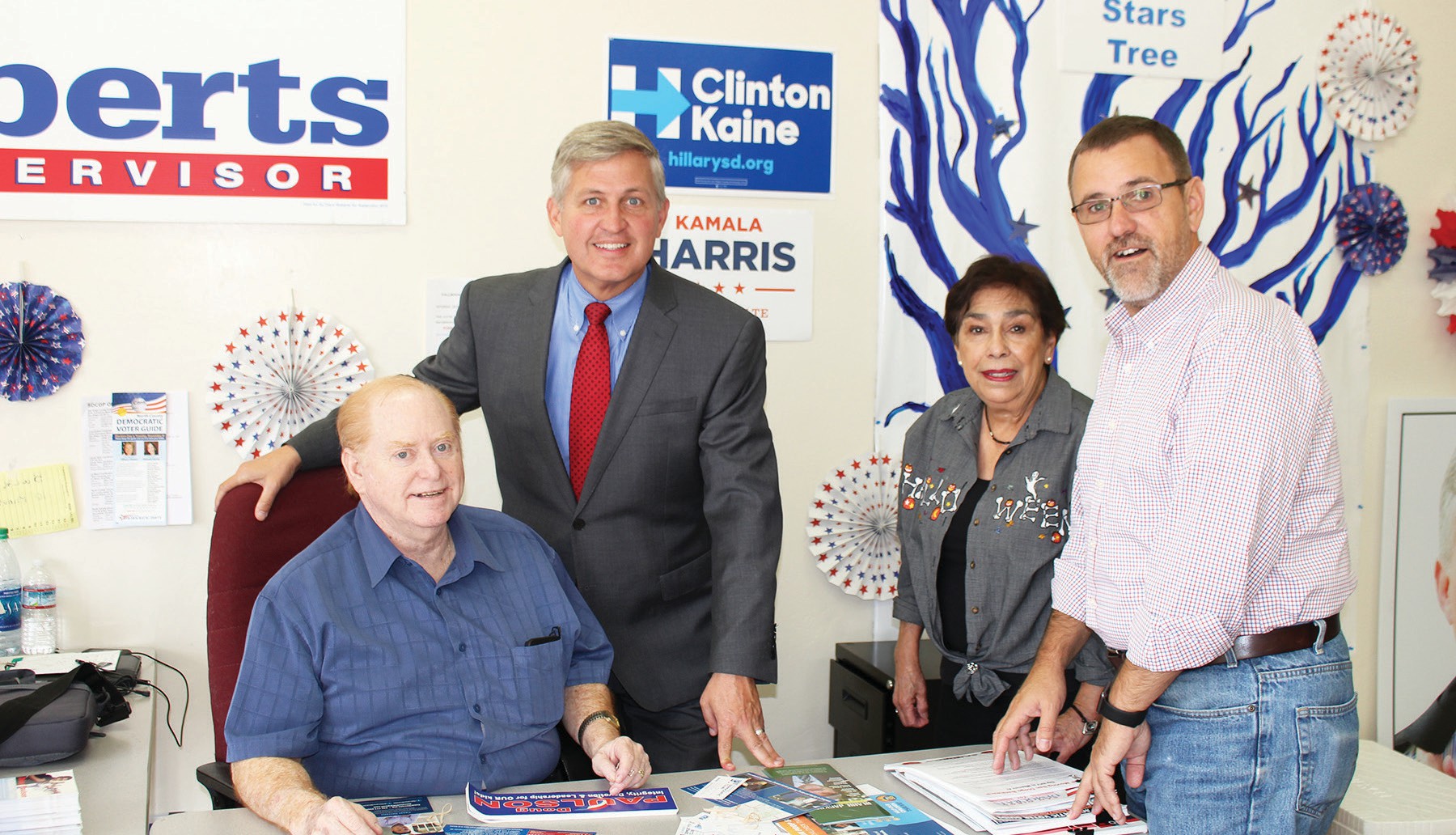 They confirmed, on video, that his sign was left alone. People helping my campaign are instructed on expectations I have regarding sign placement, and interacting with another candidate’s material falls outside of my standards. I’d be thrilled if all Treasurer candidates agreed to removal all yard signs completely. As I stated, they are just generally problematic.

“Regarding the ‘illegal’ spots for signs–I have spoken with my contractor and he is taking appropriate actions to address the situation and policies will be reinforced to the worker in question. It would help to better understand what, exactly, is illegal in this case and how such standards would apply to one candidate’s signs and not another’s. I’ve continually stated that innocent mistakes can happen from time to time, and what’s important is that we take immediate corrective action. Being advised of a violation of law and refusing to make corrections is another matter entirely.”

Clark continued, “Following Mr. Shultz’s advice, I went ahead and con- firmed (via Google): Ethics are ‘moral principles that govern a person’s or group’s behavior.’

Integrity is ‘the quality of being honest and having strong moral principles; moral uprightness.’

“I’ll submit that 1) my moral principles are well established, and I’ll not tolerate any deception by those who intend to serve the community, and 2) I have been honest throughout the campaign. Is there a claim that I am acting against my morals or in a dishonest manner?”