was active in Trinity Episcopal church 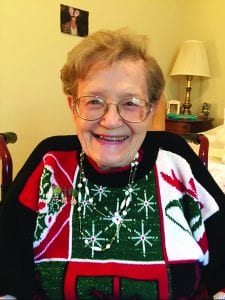 She grew up in Duluth Minnesota, but ventured to California to attend college. There, in Pasadena, she met her true love, Leonard Coldwell, which changed the course of her life. They were married for over 50 years—during which time they raised two children in San Diego  (Gordon and Joan.)

Mrs. Coldwell chose to stay at home to care for her family, and volunteered for a variety of youth organizations such as Cub Scouts, Blue Birds, Girl Scouts and the PTA. She also managed the All Saints Episcopal Church Thrift Shop for many, many years. After retirement, she and Leonard moved to their favorite weekend cabin in the mountain town of Julian.

Years later life took them to Escondido to be near her parents.  During that time they had fun traveling in their motor home and on cruise ships. Both Leonard and Jo became active in their new church, Trinity Episcopal of Escondido, where they developed yet another circle of life-long friends.

Mrs. Coldwell was preceded in death by her parents, husband, and many other beloved friends and family so she decided to join her daughter, Joan and son-in-law Bob, in Morgan Hill. There she became a loyal parishioner of St. John the Divine Episcopal Church, as well as an active participant of the Morgan Hill Senior Center.

As Jo entered into life always smiling, so too, she has entered into death. The family she has left behind; her two children, three grandchildren, six great-grandchildren, brother, nieces, nephew and cousins, all know that she is safe in God’s hands and enjoying a grand and heavenly reunion.

There will be a memorial service to celebrate Eleanor Josephine Mitchell Coldwell at  11 a.m. on Saturday, June 24th, at St. John the Divine Episcopal Church in Morgan Hill.  Then, on a yet to be determined date in late summer, her family will take her to Duluth  to join her husband and parents at her final earthly resting place.