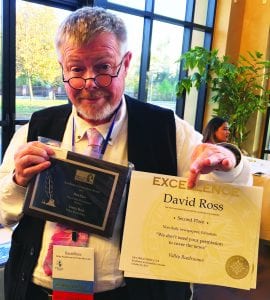 Editor David Ross, who collected four San Diego Press Club awards on Tuesday night, paused to pose with his plaque and certificate before he hurried off to go drinking at the wine tasting tables set up for the Press Club.

Ross won first place in non-daily newspapers, in the history category for the article: “Why did one of America’s best generals botch the Battle of San Pasqual 170 years ago?” This story chronicled the story of General Stephen Watts Kearny in the battle that was several miles away near the Safari Park.

In the category of Non-daily newspapers, editorials, David Ross won second place for the editorial, “We don’t need your permission to cover the News.” The editorial was written in response to a letter from a local organization telling the paper not to cover its news.

In the category of non-daily newspapers, essay/commentary/opinion, Ross won 3rd place for “No praise for faint dams,” an op-ed about state water policy.

In the category of non-daily newspapers, humor, Ross won 3rd place for the column “Making my writing fit the regulations,” a satire in the Jeremiad tradition, warning of what might happen if the First Amendment had an exception to allow for regulations.

Readers can find these articles online by following the link to: