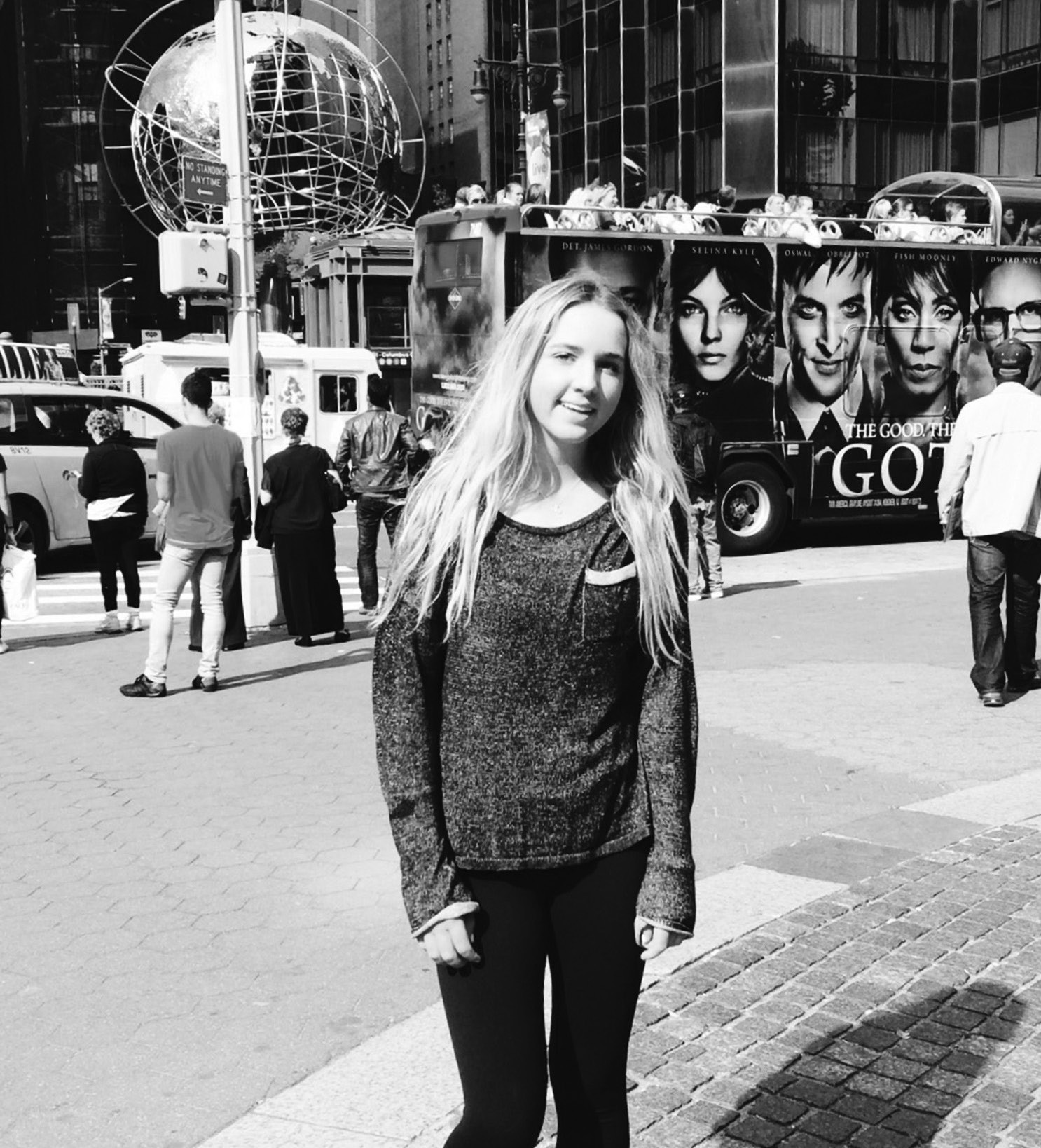 When sitting across a table from Sasha Banks, a recent graduate of Escondido Charter High School, one takes notice of many things.

To begin with, Banks is a pleasant looking young woman, armed with a welcoming face, alert eyes and a subtle but nonetheless winning smile. Her voice is calm and soothing, quite pleasing to the ear.

And it’s apparent from the get-go that here’s someone with a head on her shoulders. When she speaks, she does so easily, with forethought, purpose and clarity. Listening to her, one is convinced she knows what she’s talking about.

There’s also an authentic down-toearth quality about her, with no pretense to be found. She comes across as being quite likeable, willing to share and comfortable in her own skin. In every sense of the word, Banks seems to be the real deal. It’s hard to imagine her ever being involved in any sort of deception or masquerade. She’s upfront, informative and engaging. As far as first impressions are concerned, Banks makes a most positive one.

But, in addition to all that’s been mentioned above, there’s something else that stands out about this maturebeyond her-age 18-year-old. Unlike so many of her peers, who haven’t yet devised a definitive course of action for their future, Banks has already crafted a well-thought-out blueprint for herself. This is a young lady with a concrete plan, someone who knows exactly where she’s going. There are no signs of indecision or uncertainty here. And just in case things don’t evolve exactly as Banks has them laid out, she has contingencies in place. Befitting her intelligence and ability to project ahead, she seems to have all the bases covered. A detour or two won’t throw her in the slightest.

In a best-case scenario, Banks will someday find herself striping a golf ball as a member in good standing of the LPGA Tour. Yes, that’s a lofty ambition, but not an unreachable one given the caliber of Banks’ game, her steely resolve and dogged work ethic. Plus, the 5-7, 135-pounder is not one to shy away from dreaming big. She wonders aloud what’s the point in life if you aren’t willingly to aim high.

But here is someone who couples her heartfelt hopes and aspirations with a healthy dose of reality, and a safety net of sorts.

Having achieved nothing but A’s since her middle school days, Banks has become a titan in the classroom. Despite her love of sports, Sasha has made her pursuit of academic excellence a top priority, sometimes at the expense of her golf. For example, Banks missed more than a few of EC’s matches this past season because they conflicted with a course she was taking at MiraCosta College. When push came to shove, her commitment to her studies prevailed.

It’s because of that kind of uncompromising mindset that Banks has become a crack student and as a result, has gained admittance to Brown University, a prestigious Ivy League school. Come late August, Sasha will depart for Providence, Rhode Island and begin to carve out for herself the foundation for a successful career outside of the realm of golf, perhaps in applied math or computer science. “I want to see if it works out with golf,” Sasha readily admits, “but it’s in my best interest to have a backup plan. And if I don’t make it, I’m not going to be bummed out because I can fall back on a degree and get a job that’s reliable and steady. Something that’s much more dependable than sports can be.”

Though it is in the world of golf where Banks has earned her ever-burgeoning reputation, it hasn’t always been her sport of choice. Truth be told, Sasha has been playing the game for a relatively brief time, five years to be exact.

Prior to her making a full commitment to golf, it was on the tennis court where Banks was exhibiting her athletic aptitude. As a fresh-faced frosh at Torrey Pines High, Sasha was so skilled that she was the number-two singles player on a CIF Championship Team. But around this time, the golf bug seized her and she found it hard to resist.

Convinced she couldn’t do justice to both sports, Banks had a decision to make as to where to invest her energies. She couldn’t help but consider the strong likelihood that she would wear down quicker and be more prone to injury should she opt for tennis. Meanwhile, golf seems to offer a pathway to something more lasting. “I just came to the conclusion that I’d be able to play golf for a much longer period of time,” Banks explains of her rationale for giving up the racket and taking up the sticks.

Clearly drawn to the game and showing herself to be a bit of a quick study, it wasn’t long before Banks was making a mark. Having transferred over to Escondido Charter prior to her sophomore year, Sasha soon became the White Tigers’ most dominant player. For the past two seasons, there’s been absolutely no doubt about her preeminence. Now, what makes this ascension even more remarkable is that Banks has been producing her heroics on the boys’ team.

It is a CIF stipulation that if a school doesn’t offer a girls’ team in a particular sport, a female participant may join the boys’ squad if she can successfully compete. For the gifted Banks that proved to be no obstacle. She gained immediate respect from her teammates with her sterling play, dependability and toughness in the clutch. Banks says that she experienced nothing but immediate support from her male peers. She was made to feel part of the team from the outset. And the fact that she would ultimately become team captain speaks volumes about how she was perceived.

In the season just concluded, Banks was a standout when she was available. Though she missed some matches because they conflicted with a college course she was taking, when Banks was present, she took center stage. According to EC’s coach, Jim Riddle, Banks either won outright or tied for medalist honors in five of the six matches in which she participated. And she was a model of consistency. Rarely did her scores venture outside the 36-to-39 range for a nine-hole contest. If playing 18 holes, Banks can be counted on to shoot in the mid- 70’s. “She’s just so steady,” compliments Riddle. “I never had to worry about her blowing up, either on a hole or in a match.”

Sasha’s notable efforts were such that she made the Pacific All-League Team and was named the White Tigers’ MVP. And just for good measure, thanks to her knack for excelling on the links and with the books (4.00 GPA), she was selected to the Union Tribune’s 2015 All-Academic Team for boys’ golf.

Banks shines on the course because she’s able to match her undeniable physical gifts with a blue- collar mentality.

To begin with, her work ethic is to be envied. She’s a hard worker to the max. “I’ve got the focus to really practice a lot and grind it out,” Banks shares. “I’ve got the motivation to work on everything.” Her coach at EC verifies Sasha’s willingness to pay the price and never waver in her quest to get better. “I’m so impressed with her dedication to be the best she can be,” says Riddle. “Never once did I concern myself with her not putting in the time.”

When breaking down Sasha’s game, there are no glaring weaknesses. Her swing would be considered to be compact but it has a nice flow and synchronization to it. Though she normally incorporates a draw on most of her shots, she has the versatility to impart a fade on the ball should circumstances demand it.

From the tee, she displays both accuracy and punch, a drive of 250 yards being her norm. Her irons are a strong suit, particularly the 7, 8 and 9, which she hits with uncanny distance control. And her short game, a point of constant emphasis, is rounding into shape. With her chipping, she’s gaining more feel and touch. And on the greens, Banks is showing signs of an increased confidence and more of a willingness to trust her reads.

But, above all else, Sasha is a superior ball-striker. It’s what has helped to elevate her game and separate her from most of her contemporaries. She’s almost like a machine when it comes to zeroing in on a club’s sweet spot. Hitting it flush or on the screws is a common occurrence for her. “It is my biggest strength,” Banks reveals without hesitation. “I do seem to make good contact just about every time I hit the ball.”

Though her achievements at EC are noteworthy, Banks has made her considerable presence felt elsewhere. Her abilities are of such distinction that she has been a member of the USA Junior National Team. Moreover, her efforts have been so outstanding in tournament play that Sasha has gained exempt status on the American Junior Golf Association Tour.

As she awaits her matriculation to Brown, Banks plans on busying herself during the summer. Always at work to upgrade, refine and bolster her game, there won’t be a day that Sasha won’t have a club in her hand. Either she’ll be testing herself against the challenges of local tracks like Torrey Pines, Twin Oaks and Balboa, or she’ll be hunkered down at the Surf & Turf Driving Range, pounding balls by the hundreds. There will also be plenty of times when she’ll go the extra mile and put in double duty, moving from course to range and vice versa. And if her schedule permits, Banks hopes to stay tournament sharp by participating in a couple of AJGAT events. All this is done in hopes of laying the groundwork for a stellar college career before making a legitimate run at being a LPGA pro.

Given her fierce determination and total commitment to the game, it won’t come as a surprise if Banks does indeed reach the pinnacle of golf and eventually plays for money. But she’s made sure she’s got a mulligan available to her if needed. By having invested heavily in her studies and continuing to do so, Sasha has set the stage for success in another arena. One way or the other, you’ll be hearing from this multi-talented young woman. It might be on the course or it could be in some other field of endeavor. But her success seems assured because she’s got a definite plan and the wherewithal to execute it.