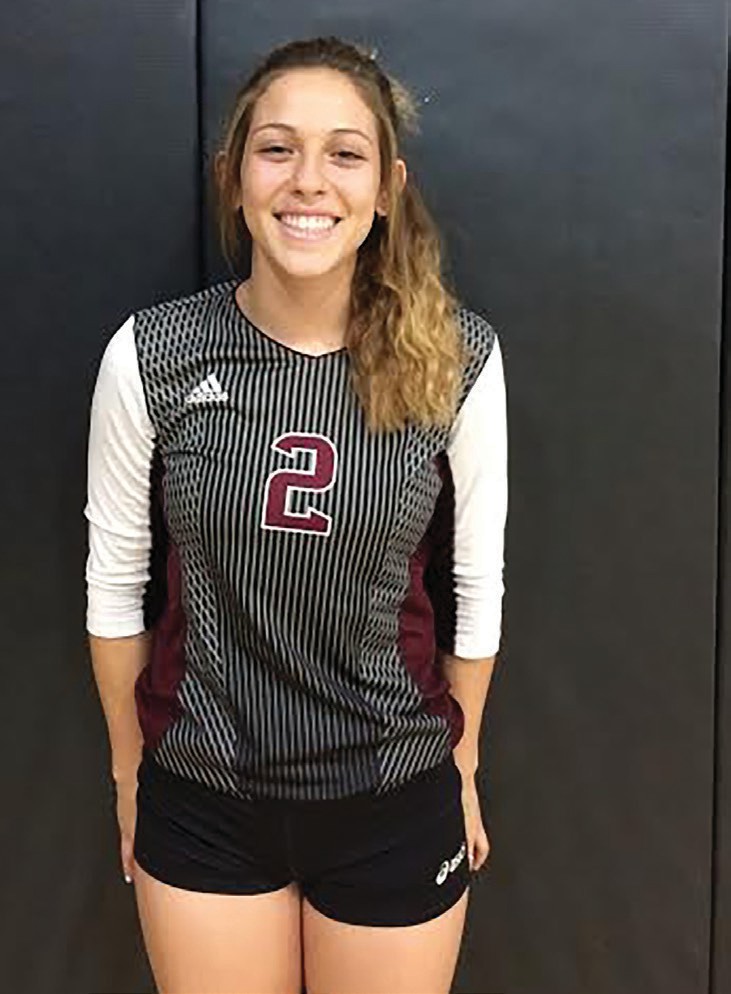 Escondido Charter volleyball standout Quiarra Barrows not only shines on the court but has some mighty big ambitions off it.

Quiarra Barrows exemplifies a star athlete inside and out. Not only is she exceptional on the courts, she is also a great leader and an extremely driven individual.

Placed on Charter’s Varsity volleyball team as a freshman, she has remained dedicated to her teammates ever since, becoming captain this year. She is also an outstanding soccer player, again retaining her position on Varsity for all four years of high school. Her plans for the future reflect her ambitious spirit, as she hopes to attend the Naval Academy.

Describing her own technique, she explains, “I’m very aggressive and able to get to the ball when I need to.” Her confidence is a clear benefit on the court: “She’s one of the highest percentage hitters on the team, and definitely the most consistent,” boasts Coach Monica Shore.

She is always working on her overall game, having just recently added the positions of setter and opposite to her resume. Playing since 7th grade, her understanding of the sport has only grown, allowing for her versatility in positions. “She’s great on offense and is strong defensively as well” Coach Stone elaborates.

In addition to her recent performances as a setter and opposite, she has played as right side and outside. Barrows admits one of her strengths is her consistency, but she is most confident in her leadership abilities.

“I uplift the team and when I see the girls dropping their heads I reassure them,” she explains.

Her assurance no doubt serves as an inspiration to her teammates. Bringing her enthusiasm to practice, she sets the tone for productive practices and games. She serves not only as a great example of a skilled athlete but also manages to remain a positive and consistent role model for her teammates.

“She’s very positive and even though she’s injured she continues to play hard and doesn’t complain,” says Coach Shore.

Barrows, however, credits the team for their unrelenting attitude: “We’re really good at letting each other know what to fix and working on that together,” she says.

In addition to keeping the team open with each other on the court, she also makes sure to regulate individual well-being. “I also like to check on the girls and make sure they’re doing OK emotionally with whatever they’re going through so that we can really focus during practice.”

Barrows works hard to be a captain that is focused on more than just the sport; she brings the team together and maintains a healthy atmosphere in every aspect.

Regardless of how practices end or games turn out, Barrows knows it’s most important to keep an uplifted mindset. As Athletic Director Greg Brose says, “We’re really focused on teamwork…at the end it’s not about the scoreboard, it’s about internal growth.” This positive attitude is what makes this team so dedicated to each other as well as to the sport itself. Barrows has even learned to turn pre-game anxiety into a positive experience. “There’s definitely a sense of being nervous but that actually helps with focus.”

Channeling that energy into each aspect of the game, she is able to concentrate on performing to the best of her ability. “It’s really important to be positive too,” she adds, “even if you know you’ll be playing a team that’s better, you have to stay positive and push yourself.” Echoing Brose’s sentiment, she explains, “If you lose, it’s not awful, it’s a learning experience and helps you know what you need to fix.”

This optimistic attitude no doubt plays a part in her plans for the future. Clearly successful in all she attempts, she hopes to channel this talent into her next endeavor. After college she aspires to join the Naval Academy and is already in the middle of the application process. “Since seventh grade I’ve had a passion to help and protect people,” she says. Her goals don’t stop with graduating as a 2nd lieutenant: “I do a lot of sports to stay physically fit because I want to join the Marines and eventually the Infantry.” Already on the right track, she was accepted to the Naval Academy Summer Seminar (NASS), a rigid program with a low acceptance rate.

While volleyball is a clear way for Barrows to stay in shape and hone her leadership abilities, she joined the sport largely due to a familial influence. “My aunt plays and was invited to participate in the Junior Olympics and I’ve always really looked up to her,” she says.

This inspired her to join a summer volleyball program and from there, her love of the sport has only continued to grow. However, soccer takes precedence. “I’ve been playing soccer since I was 5 years old, so it’s a much bigger part of my life.” This fast-paced, high contact sport is where she is most practiced. In her words, “Volleyball is more of a fun sport and soccer is more serious.” Due to her many dedicated years to soccer, it has become a high stakes activity for this high school student. “I get more anxious around soccer season since it’s such a big part of my life.” Volleyball serves as a more enjoyable sport, where she can remain aggressive and improve her athleticism without the stress that comes with soccer.

Barrows not only displays excellent leadership qualities, she is also a role model, an unstoppable athlete, and a driven student. She pushes herself and those around her to become the best they possibly can. Simultaneously mediating conflicts between teammates and communicating on the court, she has mastered every aspect of volleyball. Rather than using her athletic abilities and determined mindset to create an atmosphere of extreme pressure, she maintains a positive outlook that easily spreads to those around her. Recognizing her strengths, she is well on her way to achieving her goals in the Naval Academy, Marines, and eventually the Infantry. In Coach Shore’s words, “She’s a perfect candidate; she’s tough as nails.”