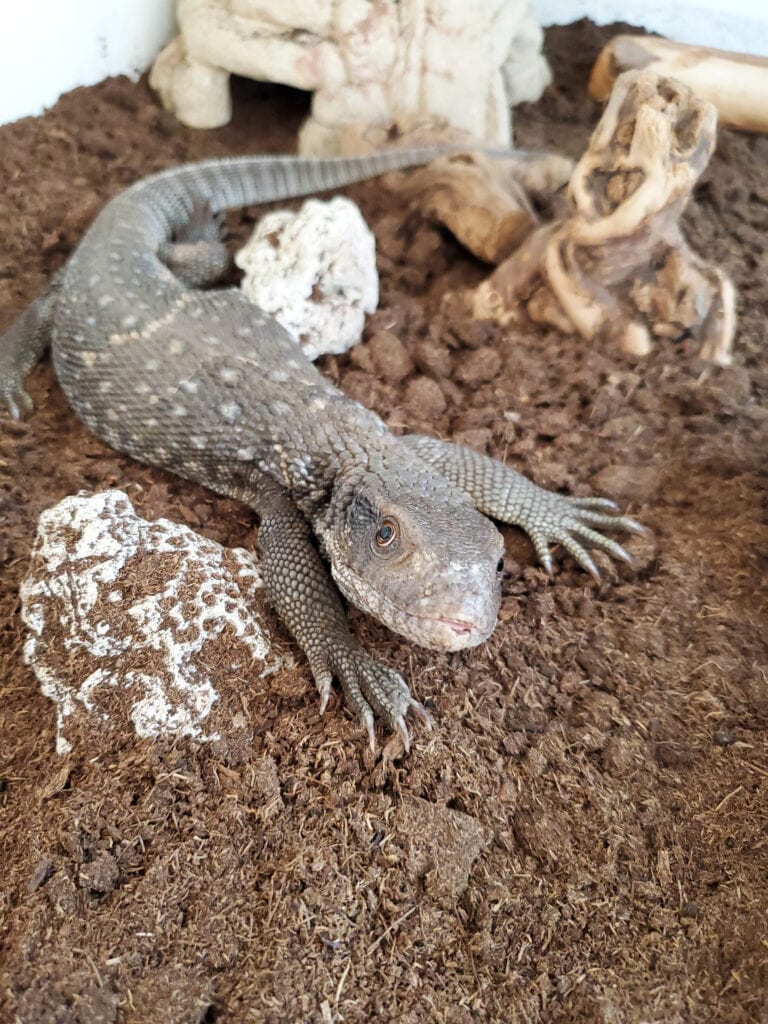 The Escondido-based EcoVivarium Living Museum in June moved from its former location on Grand Avenue to what seemed like a dream come true: a former medical office building on Pennsylvania Avenue—with more than twice the amount of space for its collection of 284 types of reptiles, amphibians, spiders and insects. Arthropods, toads and stick beetles, oh my!

But the 10,000 square foot two -story building in the shadow of the old hospital, “has been a challenge since the moment we moved,” says Susan Nowicke, founder and executive director of EcoVivarium. “These guys are on three hundred and sixty five days. You don’t get a day off.”

It was the ultimate fixer-upper, except that the landlord didn’t want to pay to fix it. Something they didn’t find out until they’d already moved in.

The very first day they had a major leak that caused some water damage and they continue to find leaks.

Initially they were excited about all of the room. Soon, however, they were informed by their landlord, a leasing company based in San Juan Capistrano, that it wouldn’t be making the improvements to the building’s structural issues that were part of their lease agreement because the insurance claim on the building wasn’t honored. “He doesn’t want to invest in the building,” said Nowicke.

Built in 1980, no maintenance has been done on it for a decade. Water was turned off for a year, which caused its own problems, including leaks that happened when water pressure was restored. “We can’t use water in half of the building,” said Nowicke. 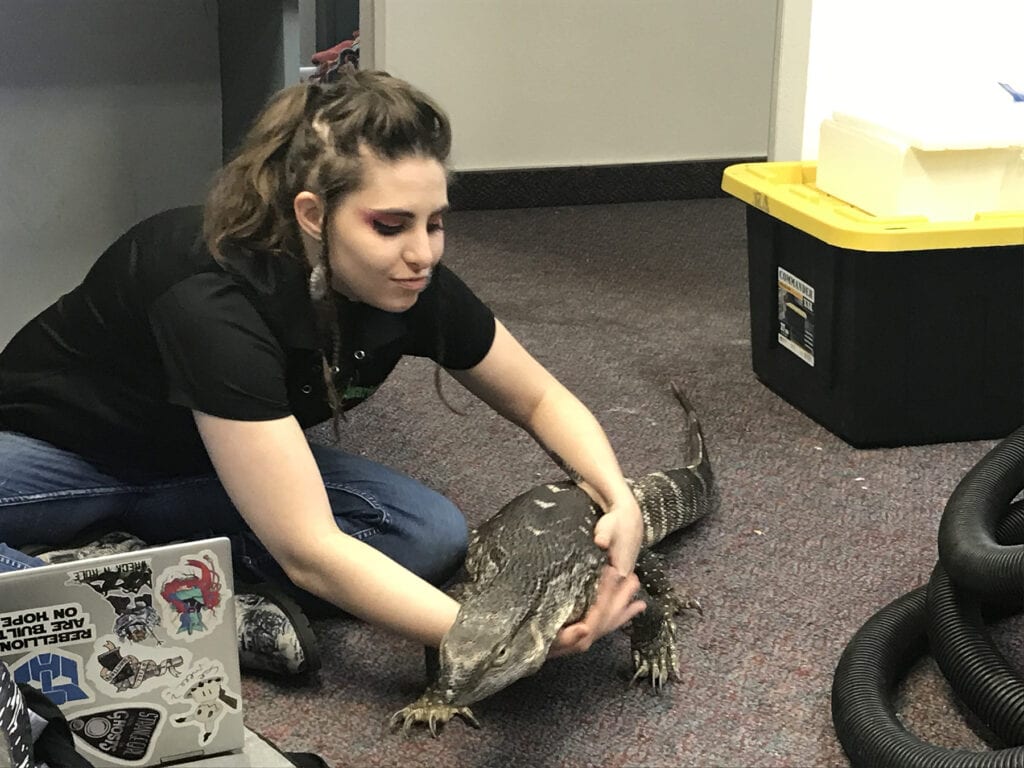 A Black Throat Monitor from Africa named Pepper gets some affection from one of the volunteers at the EcoVivarium. Pepper has some vison problems that a veterinarian thinks makes him see triple, but he is very affectionate and loves to roam around getting into things.

Contractors estimate it would take about $250,000 to bring the building to a condition where the public could be invited to visit with the exhibits.

Yet, due to a decade of neglect since it original tenants left after the old Palomar Hospital closed, it is in sad, sad shape. If ever the description “a dump” applied to a building, it fits the new—but possibly not forever—home of the museum.

There are holes in the roof, one of them ten feet wide from when vandals and homeless individuals first hacked their way in to loot the many electrical boxes for copper wires, which can be sold on the black market. They also took copper out of hot water heaters, so there isn’t hot water. For years vagrants made their homes in the parking lot. The elevator doesn’t work. The air conditioning units were also looted for their copper wire. It makes one pine for a vacation in Beirut.

The museum has brought in non-profit friendly contractors who inspected it and gave estimates of what it would take to make it habitable.

“The situation we find ourselves in is our hands are tied,” said  Nowicke. A major part of their dilemma is that the museum put $25,000 of its own money into the building. “The way things are we are not willing to invest more.”

The animals are doing well, but they miss the regular visits they used to get before the COVID-19 pandemic. “They are used to people interacting with them,” said Nowicke. “They really miss it.”

She added, “The first month of COVID we had animals that refused to eat. They were not their normal upbeat selves. They were more irritable. They wanted the interaction.”

They have a few volunteers who come in just to hold the animals.

The EcoVivarium was founded in 2009. Nowicke was one of the founders. “All of our plans are at a standstill.” Of course, the COVID-19 pandemic is the main cause for that. But being unable to offer even private tours is also a hindrance.

Then there was the heat wave of a few weeks ago. Although reptiles are reputed to like it hot, 100 degrees at most is tolerable. They had to rent portable air conditioning units and move some animals to other locations, like Nowicke’s home.

The collection ranges in size from Leopard Geckos on up to crocodiles. There are tarantulas, frogs and stick beetles and a few endangered turtles and snakes.

Ninety-eight percent of the collection are rescues and the rest are donated. They have several Monitor lizards. One is a baby under a foot long and the latest acquisition is Gojira (that’s the Japanese version of Godzilla,) who was found wandering around in the North San Diego Backcountry. If that doesn’t give you the creeps, there’s still another one out there!

Gojira is seven feet long and has teeth of surgical sharpness. If he bit your hand he could do real lasting damage—especially if you yanked it away in pain.

They have a specimen of a reticulated python, which is the world’s longest snake.

The EcoVivarium is managing to limp along during this crisis. Previous articles in other media have brought in donations and previous donors have stepped up to help. But monthly food bills are $6,800 for meat and “prey” items.

The collection also likes to feast on vegetables and surplus greens from supermarkets. The produce manager at the El Norte Parkway Vons, who is also a volunteer,  donates “trim” from vegetables.

“Our mission is to inspire people to appreciate these animals,” says Nowicke, “the role they play in the environment and understand we can’t survive without them, whether it’s bugs crawling on the earth or snakes. Without them there is a huge hole in the ecosystem.”

You may not like rattlesnakes, she says, but rattlers eat rodents that would otherwise overrun us. “Take one species out and it creates a huge hole.”

Nowicke loves to get young children into the museum (when it’s open.) “We want them to grow up to be passionate stewards of the environment and lifelong learners. What we do is educate. We talk about how the ecology is interconnected and interdependent and everything has a role to play. We are all part of the overall picture.”

Even without live visits they continue the museum’s educational mission with free virtual classes on Wednesdays and Fridays on Facebook.

Although they have a lot of volunteers, they lost some after March because there is no longer any student interaction and classes are not allowed to visit. They also used to take “ambassadors” like the Bearded Dragon to the library.

But there are still 11 volunteers. “They are a very dedicated group,” she says. “We have two who just come in to interact and hold the animals. Some get depressed when they aren’t handled.” 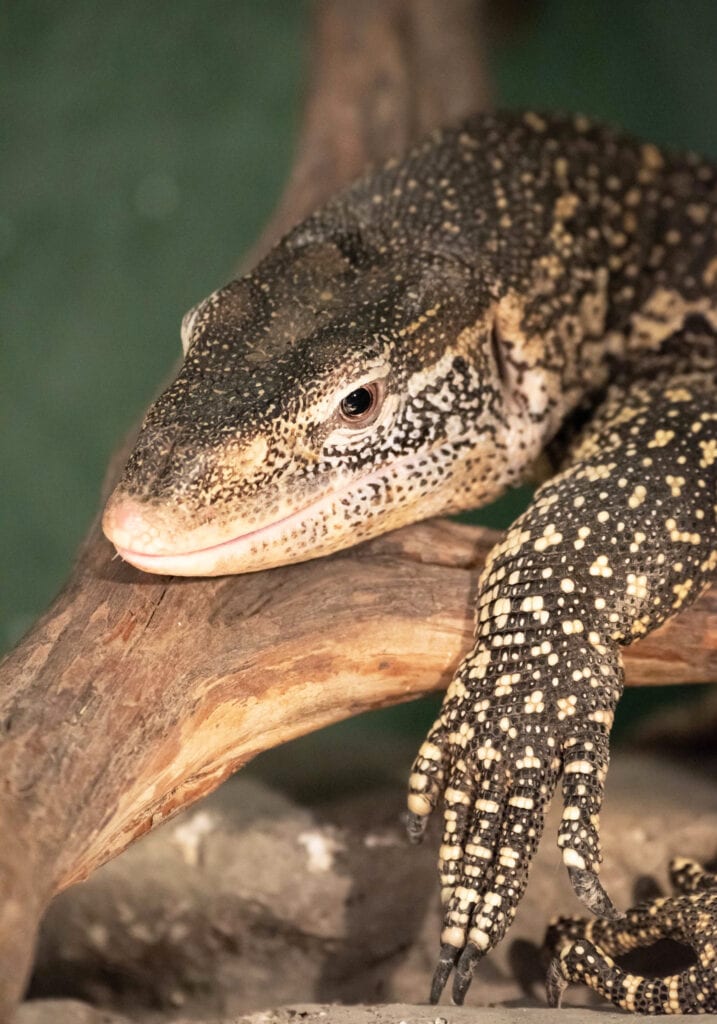 Their greatest need right now is a building of at least 7,000 SF, “and the financial support to keep everything going,” she said. “I don’t want to lay off staff. Even when they were laid off they came in to volunteer. I couldn’t have maintained it by myself.”

Food is always welcome, but no tomatoes, onions or avocados. Yes to squashes, blossoms, hibiscus or rose, or trimmings of flowers. Dandelion weeds are good too. But nothing that has been treated with pesticides. The turtles enjoy water lettuce. They can also accept exotic fruit such as mangoes, figs and papayas.

They can send projects to Scout groups to make enrichment toys for the animals, who need mental stimulation.

And if you think reptiles are stupid, consider the case of Pepper the Black Throat Monitor who likes to take daily strolls through the building. They kept finding him in the halls after they locked him up in his “office.”  They finally figured out that he had discovered how to open the door from the inside by grabbing it with his claws and leaning backwards. They had to move him to another room where the lock sticks a little more.