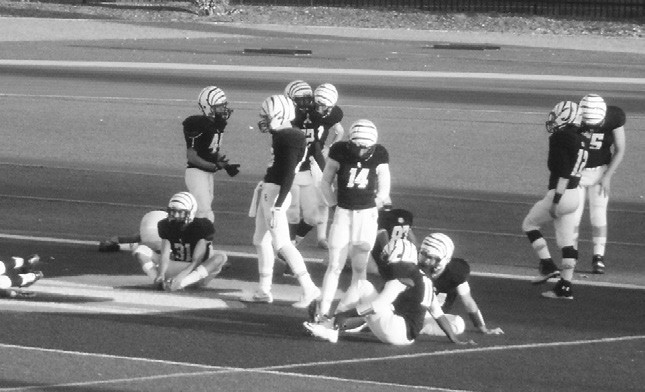 The outcome of Friday night’s contest between Escondido Charter and Vincent Memorial (Calexico, Calif.) hinged on one thing.

Could the White Tiger defense, so stout and gallant for 43 minutes-plus, make one more huge play? The game had reached its seminal moment. With EC clinging to a 7-3 lead, the visiting Scots were faced with a make-or-break 4th and 7 situation from the hosts’ 17- yard line. Up until that point, the EC defenders had been quite stingy. With very little assistance from its offense, the White Tiger “D” was the primary reason EC was positioned to win its second game of the young season and remain undefeated.

Now, with the clock winding down in the fourth quarter, they were once again being asked to step up and deliver another key stop. Do it and based upon all that had gone on before, an EC victory seemed assured. An animated home crowd was urging the locals to come through for a final time. No one doubted that, in all likelihood, this was the ballgame.

The tension was palpable as Scot quarterback Hector Robinson, a nifty player, took the snap and optioned to his right. Though he found a bit of space, the White Tigers closed fast and were poised to stop him short of the first down marker. Initially, it looked like EC had him dead to rights. Robinson was seemingly out of running room. It appeared as if the EC defense had held the fort when it mattered the most.

But not so fast. Robinson was about to demonstrate some impeccable timing. Barely a nanosecond before he was jolted by a forceful hit, the 6’1” senior flipped a masterful pitch to a trailing running back. With the EC defenders massing towards Robinson, the ball carrier had nothing but virgin turf staring him in the face. Unmolested, he scooted down the right sideline before hitting pay dirt. You could hear the air go out of the EC fans while the defense looked as if it had been gutshot. A successful conversion gave the Scots a 10-7 lead, which they would never relinquish. “It was simply an example of beautiful execution,” marveled White Tiger coach Mark Carlson about the pivotal play.

From there, things took a decidedly ugly and almost incomprehensible turn for EC. On two successive possessions, in what seemed like a blink of the eye, the White Tigers handled the football as if it had been slimed. Two fumbles ensued. The first was recovered in the end zone for a backbreaking score by the Scots. The second helped set up the visitors’ final tally, with back Fernando Santana barreling in from the 4-yard line.

Very few scores have ever been so misrepresentative of a game. The 24-7 count was hardly indicative of the closest of this contest. In truth, the difference between the respective teams was razor-thin. But in the crucible of that singular play, when success or failure hung in the balance, the Scots performed expertly. The White Tigers, just a smidgen late, didn’t. And therein tells the story.

For EC not be able to capitalize on such a stellar defensive effort was extremely deflating. And it wasn’t just a couple of players who distinguished themselves. On the contrary, plenty of defenders had their fingerprints on this impressive collective effort. At times, it seemed as if everyone was contributing. From upfront to the back end, 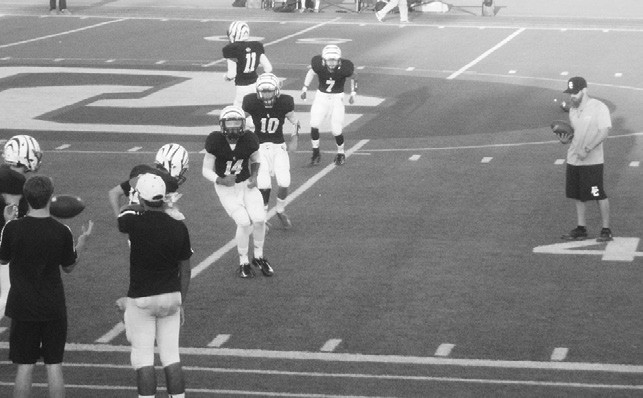 EC White Tigers weave their way through an agility drill prior to last Friday night’s game with Vincent Memorial.

guys were clearly getting the job done.

Down lineman Josh Barre was a factor inside while making some conspicuous tackles. Senior Tyler Bartlett applied pressure at the point of attack. The seemingly undersized Jono Pecoraro (5’8”, 150 pounds) was a monster at end with his penetration and big stops.

The linebacking corps was flat out studly. Junior Logan Stuard proved quite disruptive with a crucial tackle near the goal line, a forced fumble and some jarring hits. A somewhat dinged Josh Seo still managed to make his presence felt. Sophomore Hunter Boyce short-circuited the Scots’ run game on multiple occasions. And low-tothe ground Sean Carbajal stuck his nose into the fray with good effect.

And the defensive backs more than proved their worth. Safety Cameron Williams made an impact with his solid pass coverage and run support. Jake Zimmerman made a breathtaking interception with a sensational leaping grab. Cornerback James Frazier was a force with his tight coverage, a pair of nice stops and a fumble recovery.

Nary a soul would have blamed the defense had they elected to sue their offensive mates for non-support. On a night when even a mediocre offense might have sufficed, the White Tigers could find scant traction when they possessed the ball.

Unlike a week before, when EC’s flex option produced a solid run game in a victory over Calipatria, the White Tigers were stifled on the ground by the assertive Scots. Breakdowns along the offensive line were too frequent and because of that, the going was often tough. Oh sure, EC wasn’t completely hemmed in. Running back Carbajal did find some yardage inside, QB Frazier shined on few keepers and the hardnosed Boyce enjoyed a couple of notable carries. But by and large, the Scot defense won the battle in the trenches and thereby controlled play. The White Tigers never really did establish a flow or rhythm on offense. Almost from the start, things appeared disjointed and out of sync.

Even EC’s only score came courtesy of a timely turnover forced by the defense. A brisk 12-yard jaunt by Boyce got things going. Then wideout Zimmerman made a superb adjustment on an underthrown Frazier pass. While lying on his back, the 6-2 senior cradled the ball onto his chest for a spectacular 26-yard connection. Four effective gains by Frazier and Carbajal then set up the diminutive senior running back for a 5-yard touchdown burst. It was a productive sortie that put EC up by 3 but the offense could muster nothing more. This was to be EC’s only drive of consequence.

In the aftermath of the discouraging loss, EC’s headman minced no words. “For the most part, the defense played great,” Carlson agreed. “But we just weren’t mentally focused on offense. Our minds just weren’t there.”

Carlson hinted that some offensive personnel changes could be in the offing. “We’re going to look at moving some guys around,” he conceded.

Carlson also wasn’t enamored with the way his squad responded after falling behind late. “I’m really disappointed in how we reacted to adversity in this game,” he sighed. “We need to be mentally stronger and battle through the tough times.”

The White Tigers will look to improve on their 1 and 1 record this coming Friday night when they head south to take on Coronado. Recent history suggests that the EC defense will show up. Coach Carlson will demand that his offense do the same.