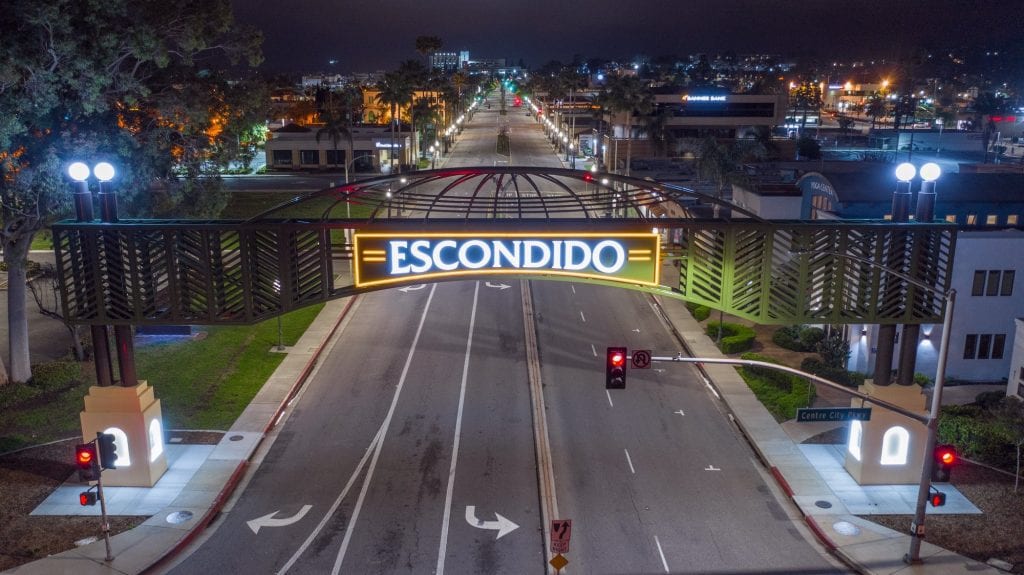 As darkness fell Saturday, the Escondido Community Foundation held a low key lighting of the Giving Arch, the 40-foot by 108-foot welcome arch over Grand Avenue at Centre City Parkway in honor of first responders—and as a beacon of hope.

The public was not allowed to congregate to watch the event but the Escondido Times-Advocate was there to provide a live-streaming that can be accessed on our paper’s Facebook page. Despite the prohibitions, there were some members of the community nearby who cheered when the light came on or honked their car horns.

The lighting of the arch had originally been scheduled for March 12 but had to be postponed due to the coronavirus outbreak. The arch had remained unlit. The ECF decided that it was time to light the new Giving Arch.

Jacquie Skay, chairman of the ECF Board, commented. “We were all so very disappointed on March 12 when because of the virus we had to postpone the community wide celebration and dedication of the Giving Arch.  Still, we expected to come back with the planned celebration as soon as circumstances permitted.

“As the enormity of this global crisis has set in, and we have witnessed the selflessness of the first responders and essential workers it became necessary to express our thanks in some way.    One common theme we have seen repeated all around the globe is the use of lights to express thanks and hope.  Escondido is a very spread out community.  It’s not like we have a lot of high rise apartments in a central downtown area where we could all come out on our balconies and flip our lights on and off as we have seen in other parts of the world.  But, we do have this Arch.  We have it now.  And, it needed to be lit now-as a symbol of thanks to essential workers and as a symbol of our community coming together and of hope.  We can still have our community wide celebration later.  But, right now, this Arch being lit meets a much more important and immediate need.”

ECF is an affiliate of the San Diego Foundation. The arch, named “The Giving Arch” is in recognition of the generosity and community spirit of Escondido residents. Its design reflects the architectural lines of Escondido City Hall and the philanthropic spirit of the community and will welcome both residents and visitors to Escondido.

Lisa Ruder, ECF volunteer special project chairman and past ECF chairman, described how the foundation’s “huge community celebration” that would have included high school bands and mariachis to celebrate pride in the city evolved into something different.

“It became a much different symbol a month later, not only the pride in the community but hope an unity and a thank you to first responders and medical workers,” Ruder said. “People are getting a sense of peace from it and we are asking people to light their porch lights for the duration as a sign of hope as well.” She added, “It was really nice to hear the cheering and honking. People are getting a sense of peace and unity by driving past and seeing the arch lit.”

Someday the foundation hopes to have a proper big celebration under the arch, “but we are uncertain when that will occur. Only when it is safe and reasonable for us to do so,” said Ruder.

Ken Lounsbery, who has lived in Escondido for 50 years, commented, “When you consider the purpose of the arch it became clear that now was the time to light it and send a message to the community that this is a commitment to charitable giving. There are lots of arches that designate a community. This does that but it does more. It’s a recognition of the history of charitable giving and a commitment to that same endowment to charities in the future.”

He added, “While the arch is a result of contributions and one particularly large contribution from members of the foundation, it really symbolizes the three plus million dollars given over the last decade by the foundation and hopefully will promote even more charitable giving. I’ve been in Escondido since 1970, and served publicly and privately. I’ve never seen such a graphic example of community commitment helping one another. Yes we have icons: the Center for the Arts, a major regional shopping center and an auto park, but the arch is unique. It became even more unique when it was dedicated in a context of the community having to pull together and support each other. It’s a symbol like no other I’ve seen in my 50 years here. It’s more appropriate that it was lit in the struggle against the pandemic because charity has emerged as one of the good things to come out of this struggle. I like to think that the arch will be remembered in that context.”

City councilman Mike Morasco, who was also at the event, told The Times-Advocate, “It was a nice moment and a good reminder of our beautiful city and its citizens.  It is somewhat iconic with the lighting of the Giving Arch during this time of trial for us and how this event represents the great and charitable nature of so many and the new light of hope for our recovery and recuperation. A beacon to everyone what we are here and well and will ‘be back!’ ”

The lighting coincides with the Foundation’s donation to the San Diego COVID-19 Community Response Fund which is rapidly deploying resources to nonprofit organizations that are supporting local workers and families most affected by the coronavirus crisis. The Arch also celebrates nearly 14 years of charitable giving by the Foundation – a figure totaling of nearly $3 million dollars

“The Giving Arch pays homage to the spirit of what we do at the Escondido Community Foundation.  A project like this that fosters community pride and identity,” said Lisa Ruder, a board member at ECF.