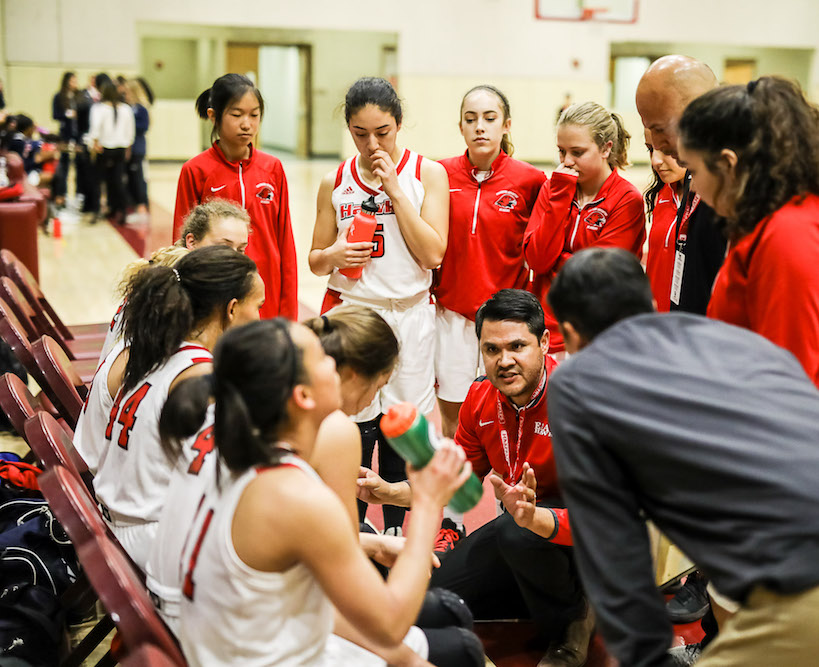 Hawks coach Mario Perez gets intense as he instructs his team during a third-period timeout.

Oh, what a ride it was for the Escondido Adventist girls’ basketball team.

The Lady Hawks had been nothing short of tremendous while fashioning a sparkling 28-1 record, winning 14 straight and carrying a No. 1 seed into their Division III title tilt versus Christian High of El Cajon.

All that was missing in order for the Hawks to complete their magnificent run in grand style was to bring home a CIF championship against the Patriots (21-9.) But alas, the basketball fates had something else in store.

Anchored by a relentless pressing defense and the outside-inside combination of sharpshooting guard Kristin Williams (27 points) and power forward Simone James (19 points), the second-seeded Pats weren’t to be denied as they parlayed a third-quarter explosion into a 67-49 victory last Saturday night at the Mission Hills High gymnasium.

After an exciting and entertaining first half that saw Christian clinging to a narrow two-point lead, the Patriots put the hammer down right after intermission, outscoring the Hawks 20-7 over the next eight minutes. The freshman Williams was at her very best during this decisive stretch, nailing three treys from way downtown. Meanwhile, James was getting it done with a nice spin move to the hoop, a crossover dribble that resulted in a layup and a pair of free throws. 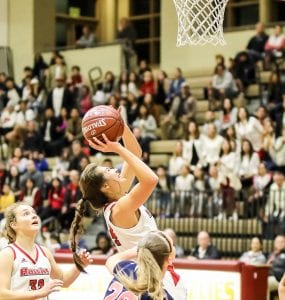 Senior Allison Simmons puts up a shot from underneath as teammate Chynna Cochran looks on.

Primarily as a result of the notable efforts of Williams and James, the Pats owned a 15-point margin entering the fourth quarter and looked to be very much in control of things. But the prideful Hawks weren’t about to go away without a last concerted push. Senior guard Chloe Cochran, who played sparingly because of a leg injury suffered early in the fray, showed some true grit by knocking down a corner three. Next came an artful putback by forward Chynna Cochran (Chloe’s cousin) that got EA within 10 points.

Later, the Hawks got a shade closer when Chynna converted a free throw, versatile Allison Simmons put one off the glass and Camille Chu hit on a perimeter set shot but that was to be EA’s last hurrah. The Pats eliminated all doubt about the outcome by scoring nine of the final 10 points of the game including another 3-point stroke from Williams, the eighth and last trifecta of her wondrous and enchanted night.

Both teams entered the title game having dispatched three opponents in the playoffs. Christian, in particular, was on a monster roll having taken down Holtville, Mission Vista and El Capitan by a combined 75 points.

The path for the Lady Hawks wasn’t as easy but they more than justified their seeding and proved their worth while getting the best of Hilltop, Morse and tough Otay Ranch.

Thus, as was anticipated in most quarters, the top two seeds advanced to a final that held genuine interest and intrigue.

And in many ways, the intense and frenetic action of the first half lived up to expectations. Both teams were seeking to get the upper hand by employing full court pressure while also looking to get out in transition when the opportunity presented itself.

The first quarter ended with the Hawks up by a count of 19-18. The senior Simmons, who would finish the night with 15 points, was instrumental in establishing this lead with a pair of nice follow shots and a pair of charity tosses. A late drive by Chynna Cochran in which she exhibited some nifty footwork down the lane was the shot that put EA ahead.

And the Hawks continued to expand on their margin, taking a 26-19 advantage midway through the second stanza when Cochran converted on a deft spin move and a free throw while Simmons tallied on pair of shots from in low. At that moment, the Hawks appeared poised and ready to seize the momentum. 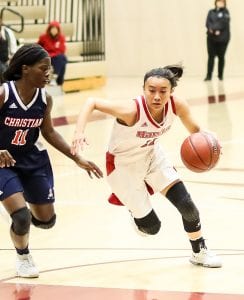 But it was not to be as Christian shooting forward Hannah Richardson drained a huge right-side three which was immediately followed by another Patriot trey, this one coming from the bombardier Williams. Next came a layup courtesy of James and when Williams culminated this 9-0 run with a free throw right before the break, the Pats had flipped the script and taken a 28-26 edge going into the locker room.

Then came the fateful third period where the issue was basically decided. Christian’s relentless defensive pressure began to take its toll which resulted in a bevy of turnovers and empty possessions by EA. The Hawks were also greatly wounded by missing four free throws at a critical juncture that would have allowed them to stay close. But by that time, Williams and James were starting to assert themselves offensively, thereby creating a disparity on the scoreboard that the Hawks were never able to overcome.

From the Hawks side of things, there was no disputing that Chynna Cochran had been the team’s top performer. Not only did she produce a hard-earned 20 points but her willingness to compete and battle throughout earned for the standout senior both high praise and respect. Indeed, she had been a true warrior from start to finish.

In a season that was special beyond words, about the only thing the Hawks didn’t soar over was their final hurdle, one that came in the form of a dynamic Christian squad that simply had too much firepower, both inside and out .