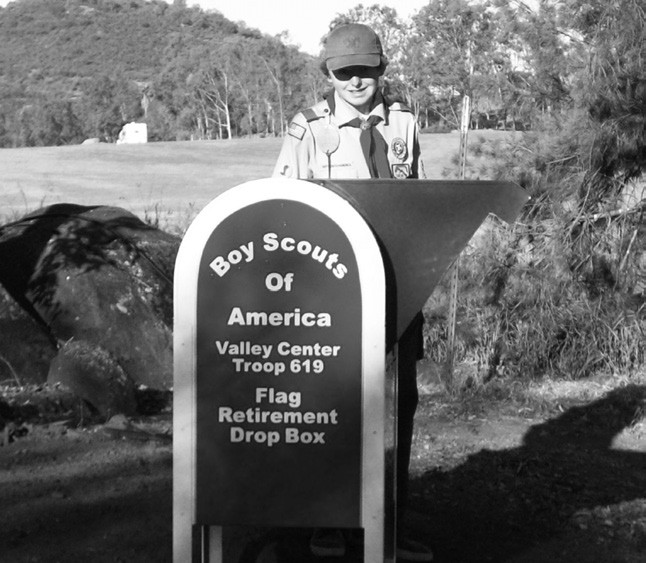 Dustin Prayther’s Eagle Scout project provides a place where American flags can be retired according to the proper etiquette that should be afforded to Old Glory.

Dustin, 16, began scouting in 2007 with Valley Center Cub Scout Pack 619. He is now a Life Scout in Valley Center Boy Scout Troop 619. He is working towards earning the rank of Eagle Scout, the highest rank in scouting.

He told the Times Advocate: “One of the most important activities I learned in scouting has to do with the American Flag. I learned that there are only a few organizations in the entire world that are allowed to properly retire the American Flag. Boy Scouts of America is one of them. Over the years, I have been lucky enough to be a part of retiring quite a few American Flags. When I retire a flag, it makes me feel patriotic.”

Dustin came up with the idea for his Eagle Scout Project a couple of years ago. As he describes it, “I was at the Lilac fire Station working on a merit badge. I was given a box of old, worn flags. I was told that people in the community dropped them off at the fire station, thinking they could retire them. They just kept them, because they can’t officially retire the flags. It was then that I decided to create a Flag Retirement Drop Box for the community.”

Residents of VC don’t need to throw out old, worn or torn U.S. flags. Now there is a place you can take them, and Boy Scout Troop 619 will make sure they are retired properly.

The Flag Retirement Drop Box is located at the community center/baseball fields.

“A special thank you to the Valley Center Parks & Recreation District for providing the space to do my Eagle Scout Project,” said Dustin.