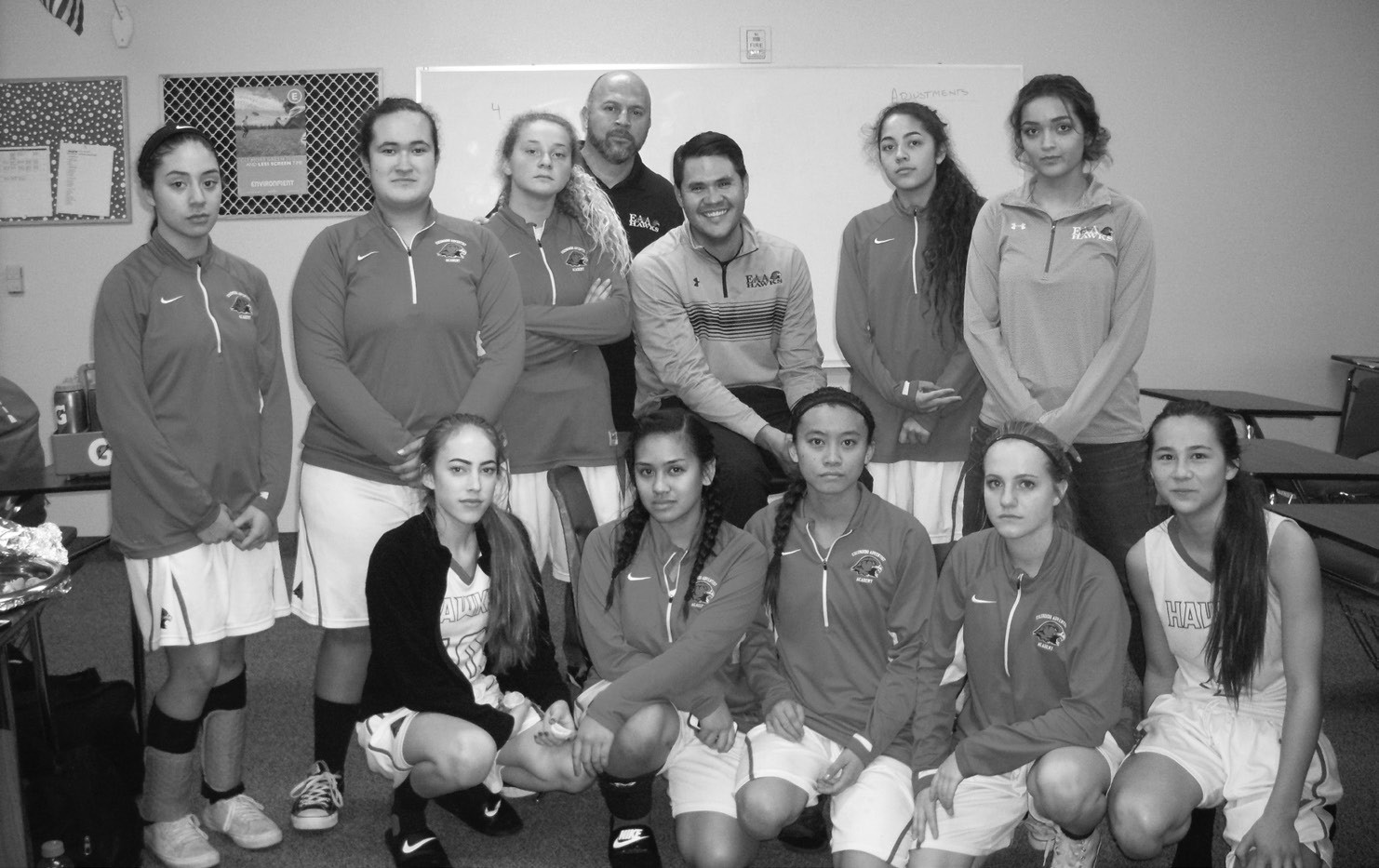 It is almost impossible to find a more welcoming or more committed group of athletes than the Escondido Adventist Academy girls basketball team. Full of passionate and hardworking athletes, this team is confident, encouraging, and extremely positive.

In addition to having some of the most uplifting personalities, these girls also exhibit a wide range of talents and skills, evident by their current 9-2 win loss record. “The girls work really hard and they love to play and especially to play together,” explains Coach Mario Perez. The team functions as a unit, so in sync with one another that their accomplishments on the court undoubtedly stem from their tight knit relationships with one another.

Each member brings her own energy and devotion, contributing to the extremely encouraging and hopeful vibe of the group. “This specific team genuinely cares and that chemistry is important for their success,” says Perez, “it’s something you don’t see everywhere.” The older girls, most of who have been playing together since at least freshman year, have created a familial atmosphere that quickly adapts to include newer members. While there are no seniors or freshmen on the team, there is never a lack of experience or energy. The girls, whether new or veterans, share a genuine love of basketball and truly enjoy being teammates.

The junior Hawks include Chloe Cochran, a shooting guard who is currently in her third year on varsity. She loves playing with the team, describing it as “like playing with family.” While the term is used metaphorically, she does have a few relations on the team. Her cousin, Chyna Cochran, is also a three-year varsity member, and performs as a power forward and center. In addition to basketball, she keeps herself busy with volleyball, softball, surfing, and “anything my brothers are doing.”

Allison “A-dog” Simmons is a power forward playing her third year on varsity. She adds volleyball and softball to her resume, but favors the speed of basketball. Britney Austin, shooting guard, has been on the varsity team for two years. “It’s intense, really fun, and challenging too,” she says.

Saige Afalava is a third year varsity center and another cousin to the Cochrans.

She loves the defensive side of the game, focusing her skills on “boxing out and rebounding.” Julianna “Toni” Alamo, is a two-year varsity member, who thrives on the “energy the game has.”

Compared to her other sports, volleyball and softball, “out of the three, I get most into basketball,” she says. Cami Chu, Simmon’s cousin, is a point guard enjoying her third year on varsity. She “loves the sport” and the fact that all her friends play it as well.

Brooklin Brown concludes the juniors on the team, and is in the midst of her first year on varsity. She is a forward who finds her strength in rebounding. Despite the varying levels of experience, these girls relate to one another as if they have never spent a day apart. Laughter and energy emanates from whatever room they occupy, each player sharing encouragement and motivation with one another.

The sophomores, while composing the minority of the team, are in no way isolated from the larger group of juniors. Monique Johnson is a power forward and in her second year on varsity. She prefers basketball to her other sport, soccer, because “it’s more hands on and a lot of fun.”

Zoe Grant, shooting guard, is enjoying her first year on varsity. She loves “the rush” of the sport and finds her strengths are in “dribbling and shooting.” Katie Youngberg is the final member of this impressive team, and plays as a guard. It is her second year on varsity and she enjoys “playing the opposition,” explaining that, “playing different kinds of teams can be really fun.”

The Hawks’ three coaches are equally enthusiastic about this year’s group of girls as well as the promising outlook of this season. Coach Donald Cochran — yes another member of the Cochran clan — has worked with EAA’s girl’s basketball team for the past four years. Perez, the head coach, has worked with the varsity Hawks for five years. He has been a coach, however, for a total of 12 years, having previously coached baseball in Riverside for seven years. His love of basketball dates back to both his high school and college days, where he participated in Pacific Union College’s NAI team. His favorite part of coaching is found in “the relationships and the chance to do life with the kids.” Coach Jasmine “Jazz” Serna agrees, adding, “It’s like a family and a home here, they all actually care.”

This team is clearly defined by their attitude, which shines through during every game bringing success after success. While thrilled to be leading their new league, a level up from last year’s, the team remains humble and hardworking. “We still have work to do” expresses Chu, “we’re at the top and we’re the team to beat which means we need to improve so we can keep that.”

The team’s daily mantra, according to Perez, is “Let’s get better.” While they have been consistently strengthening their skills since last year, already demonstrating progress this season, he hopes this group of Hawks “continues to improve as players, women, coaches, and people.”

The girls’ passion for the sport makes this an obvious goal for each member as well. The environment is extremely team oriented, “When one does well, they’re all excited, when one does poorly they all look to pick up and encourage her,” says Perez. Each girl has an enthusiasm for the overall success of the team that is usually found in only a handful of players. As Serna explains, “You can teach a girl to play basketball but not to really love it.”