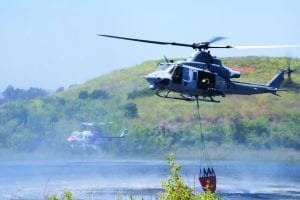 A Marine helicopter teamed up with a CAL FIRE chopper at Camp Pendleton in early May to demonstrate how military and civilian agencies prepare to fight wildland fires in San Diego County.

In 2003, when a series of wildfires devastated San Diego County, killing 17 people and destroying 2,453 homes, no mechanism existed to enable locally based military aircraft to join the firefight. In 2007, when a second massive firestorm revisited the county, military aircraft were used to fight the fires, but were limited.

Those two cataclysmic wildfires taught hard lessons, and today the military stands ready to join its civilian counterparts in fighting wildfires. The reverse is also true.

On May 4, the Marines, Navy, CAL FIRE and the San Diego County Sheriff’s Department teamed to demonstrate this spirit of cooperation at Marine Corps Base Camp Pendleton by flying over a simulated fire and dropping water.

“Prior to 2007 there was not a mechanism in place to rapidly deploy and utilize military assets in support of wildfire suppression,” said Marine Lt. Col. Ryan Sather, an aviation operations officer at Camp Pendleton. “In 2008, the agencies participating here today partnered through operational agreements and training plans to ensure that this would never happen again.”

This spirit of cooperation was evident when brush fires broke out three years ago in Rancho Bernardo, Carlsbad and San Marcos. Military helicopters entered the fray, helping save homes and possibly lives.

“During this time the Navy and Marine Corps teams provided aerial support to CAL FIRE, with up to 30 aircraft per day suppressing fires simultaneously along with our state partners,” Sather said.

During the May 4 demonstration, helicopters drew water from Lake O’Neill and circled over a simulated fire scene, dropping loads of water on their target. The helicopters included a UH 1H Yankee, a CH-53 Super Stallion and an Osprey MV 22. A CAL FIRE UH-1H helicopter participated, at times flying in tandem with a Marine chopper. The action was directed by a San Diego Sheriff’s ASTREA helicopter crew flying overhead.

CAL FIRE Director Ken Pimlott said that the cooperative agreements between CAL FIRE, the Department of Defense and other agencies stand as a model for the rest of the nation.

“In California, we’ve had longstanding cooperation and relationship with our state partners, the California National Guard, but it took some of the most devastating fires in the state’s history, in 2003 and then again in 2007, to really push us forward into an agreement that allows for federal DOD (Department of Defense) assets to move off the 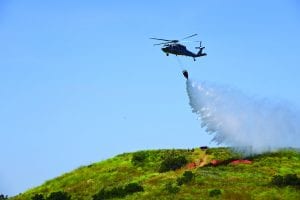 A Marine Sea Stallion helicopter drops its load of water on a simulated fire during a demonstration at Camp Pendleton.

base to support communities surrounding the base,” Pimlott said in introducing the air demonstration.

Pimlott expressed concern for the upcoming fire season, saying that the winter’s heavy rains promoted the growth of the wrong kind of vegetation in heavy grasses that dry out and burn fast.

“That’s the kindling,” he said. “That’s where fires will start and move into the heavier brush. We haven’t seen that in the past several years because we haven’t had the moisture to create that.

A version of this article appears in Fire Safety News, a monthly e-newsletter published by the Deer Springs Fire Safe Council. To subscribe go to www.DeerSpringsFireSafeCouncil.com and click on the “SUBSCRIBE” link.