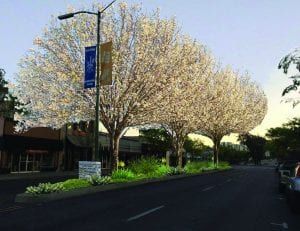 This design for the Grand Avenue median project was proposed two years ago by Alex MacLachlan, president of the Downtown Business Association. Steve Jacobs of Nature Designs Landscape, created it for the DBA free of charge.

Escondido’s Downtown Business Association recently received a community enhancement grant from the County to fund additional landscaping in the Grand Avenue medians. They will be working in partnership with Escondido’s Public Works Department and maintenance contractor to purchase, install, and maintain landscaping to enhance the beauty of the Downtown.

Michelle Geller, economic development manager for the city, told The Times-Advocate: “About a month ago, the City redid the landscaping in the medians along Grand Avenue as they were looking a little worse for wear. The downtown business association was recently awarded a grant from the county and wished to use some of the funds for continued upkeep on the medians, including new plants, etc.”

The specific logistics need to be worked out, but Geller praised the downtown merchants for “taking a proactive role in maintaining the appearance of our historic downtown. They are our eyes and ears on Grand Avenue, and having them be partners with the City on this is definitely a plus.”

Alex MacLachlan first proposed the design for Grand Avenue in 2015, but encountered some problems.

MacLachlan told The Times-Advocate: “I was told the city was prohibited, by Sacramento, from planting the medians until water saving drip irrigation was installed as a drought response requirement. The drip irrigation was later installed and a few grasses and succulents planted. Over the last year, the Downtown Business Association has re-introduced to city leaders and staff, median beautification, as one of our top downtown priorities, through a series of bi-monthly merchant meetings, that were attended by various city staff. Unfortunately, no action was taken.”

Then, two months ago recently promoted Economic Development Director, Michelle Geller, took a photo of the now dead and dying landscape on downtown medians, and distributed the photos to her superiors. “Apparently, those pictures spoke a thousand words and prompted the action and permission to act, the Escondido Downtown Business Association has been seeking for two years,” said MacLachlan.

While they were waiting the DBA continue to raise funds for downtown promotion through their “very successful” Escondido Tamale Festival, Escondido Chocolate Festival, Grand Avenue Street Fairs, and targeted requests for Community Enhancement Grant funds, through the County Board of Supervisors, which was just approved last week.

MacLachlan hopes this is just the beginning. “With the unprecedented financial strength our all-volunteer Escondido Downtown Business Association is now in, we hope to gain further permissions, in coming months, to invest more in downtown beautification, through our proposed downtown sidewalk tree up-lighting, Christmas and Holiday lighting/decoration, and ‘smart parking’ plans.”

He added, “We think public / private partnerships can be very beneficial to achieving community goals, so we very much look forward to working with the Escondido Public Works Department’s landscape experts, in creating and implementing a downtown median beautification plan the city can enjoy and be proud of for many years to come.”