“Pete’s Dragon” and “Kubo and the Two Strings”: Ambitious movies that sometimes work 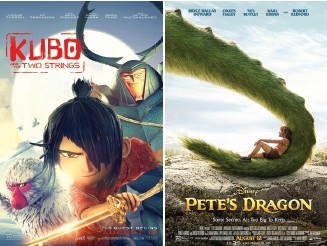 Nothing new was able to crack the Top 5 at the weekend box office, and I’ve already reviewed first-place finisher “Don’t Breathe” and second-place “Sui­cide Squad.” So I’m going to take a look at the holdovers that came in third and fourth, respectively.

Disney has had a lot of success lately with live-action versions of animated classics like “Cinderella” and “The Jun­gle Book.” Now they’re trying to have success with a live-action version of a 1977 film that was half animated and half live action. Actually, the dragon this time is computer generated, so it’s still a mix of live action and animation.

The good news is that they get Elliot the dragon right. He’s flawlessly ren­dered, super funny and adorable, and ca­pable of a wide variety of emotions. How I wish the movie was complex enough to justify more of these emotions.

Instead, it’s a standard tale of Pete (Oakes Fegley), a boy who has grown up with Elliot, meeting other humans for the first time in years and having to prove the dragon is real. Then of course there’s the matter of what people will do with Elliot once they find out he’s real. There’s also an expected subplot about Pete maybe having to leave the life he knows with Elliot to live with a human family.

“Pete’s Dragon” feels incomplete; like Elliot has at least one more ad­venture in him than what we get. What we do get isn’t “bad” exactly, apart from a villain (Karl Urban) who makes a bunch of stupid deci­sions just because he’s the villain. I just wish this movie had more ambi­tion befitting its awesome dragon.

“Pete’s Dragon” is rated PG for ac­tion, peril and brief language. Its running time is 103 minutes.

“Kubo and the Two Strings”

Here is the opening line for “Kubo and the Two Strings”: “If you must blink, do it now.” That’s quite a claim that the forthcoming movie will have a hard time backing up. But yeah, that statement de­scribes this movie pretty well, for better or worse.

Kubo (Art Parkinson) lives in a small Japanese village where he makes a living telling elaborate stories with even more elaborate origami puppets. He’s attacked by his evil aunts (both Rooney Mara) and his magical mother (Charlize Ther­on) uses her last bit of strength to send him on a quest to find his late father’s missing armor, which will help protect him from his evil grandfather (Ralph Fi­ennes). Kubo is aided by a dour monkey (Theron) and a meat-headed beetle (Mat­thew McConaughey) who seem to have the hots for each other. This movie is so crazy that a monkey falling in love with a beetle falls perfectly in line with every­thing else.

When this movie works, it really works. The animation is beautiful, the painstaking stop-motion work by plucky studio Laika (“ParaNor­man”) paying off yet again. It ratch­ets up the intensity and darkness to a level not usually seen in a kids’ film, but is certainly welcome. But that’s not to say it doesn’t also have its lighter, fun moments, and those work pretty well too.

The problem I have with “Kubo and the Two Strings” is the same problem I had with “Inside Out” in that sometimes it’s so ambitious that it can’t seem to keep up with the skewed rules of its own distorted world. Or maybe it does and I just blinked and missed something. At any rate, this is still one of the most exciting and delightful films of the year.

Three Stars out of Five

“Kubo and the Two Strings” is rated PG for thematic elements, scary images, action and peril. Its running time is 101 minutes. Contact Bob Garver at rrg251@nyu.edu.