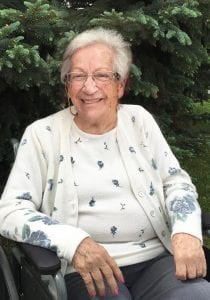 Dorothy Marie Farrow passed away peacefully at the age of 91 on Tuesday, May 21, 2019 with her loving family by her side. She was born on February 5, 1928 in Nebraska to Earl and Edith Baum, the youngest of four children. Dorothy graduated from the School of Nursing at Creighton University in Omaha, Nebraska in 1944 and was united in marriage to Ray Farrow in December of 1948. They started a family of seven in Nebraska before moving to Escondido, California in 1960. She spent the majority of her nursing career in the operating room at Palomar Memorial Hospital as a surgical nurse, supervisor, and director for more than 30 years.

The couple retired in 1994 to Lake Havasu, Arizona, where they enjoyed years of dry-desert heat, lakeside living, fishing, and Thanksgiving dinners that developed into a cherished family tradition. Mrs. Farrow will be remembered for her love of family, generous spirit, wonderful sense of humor, incredible green thumb, craftiness, and her love of all things Christmas.

Mrs. Farrow was preceded in death by Ray, her husband of 55 years and her great-granddaughter, Madelynn Cleveland. She is survived by all her children: Sue (Farrow) Hamilton, Linda (Farrow) Cleveland, Mike Farrow, Pat Farrow (wife Pam), Nancy (Farrow) Ryden (husband Randy), Danny Farrow, and Cindy (Farrow) Linder (husband Ralph). She was a loving grandma to 14 beautiful grandchildren and 13 adorable great-grandchildren.

In lieu of flowers, the family is asking donations be made to The Roz and Len Kolins and Dorothy Farrow Nurse of the Year Award through the Palomar Health Foundation www.palomarhealthfoundation.org/palomar-health-foundation/how-you-can-make-a-difference/dorothy-farrow