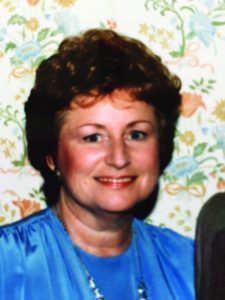 Dorothy Havins Lundy, widow of Clell R. Lundy, passed away March 6, 2017, with her daughter and son by her side.

Born January 28, 1938 at San Diego County Hospital to Troy & Felicia Green Havins, she joined siblings George & Barbara (Brinley), living most of her youth in the family home on the corner of Woodward and Escondido Blvd.

Dotti Jo to friends at Lincoln & Central schools, Mrs. Lundy graduated from Escondido High School Class of 1955 and remained close to her high school pals as long as she lived.

She met Clell at the 7th & Orange Church of Christ as a teen and married the EHS Cougar pole-vault star in June 1956. The couple welcomed daughter, Abbe Suzanne, in 1957 and son, Glen Morgan, in 1960.

When Clell returned to college, Dorothy easily found a secretarial position at The Times-Advocate newspaper, spending 1965 to 1980 advancing to Personnel Manager, often contributing articles, interviews and editorials to the publication. Her later career was spent in Managerial Consulting.

The Lundys, devoted to family & church, used their home to host and serve – Dorothy, the consummate decorator and event planner. She was a trusted and beloved advisor to many in her spiritual community.

After losing the love of her life, Clell, in 2014, Mrs. Lundy continued to enjoy her loving local extended family, including nieces and nephews, children of the siblings who preceded her in death.

Dorothy was dearly loved and survived by her daughter and son, six grandchildren and six great-grandchildren.