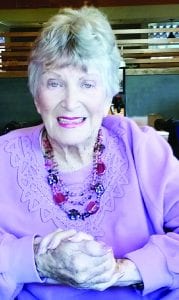 Born in the West Indies to James Caldwell Burnett, a U.S. Navy Captain and his English bride, Dorothy Barker Burnett. Mom and her three brothers Keith, Michael and James followed their parents around the world, before settling in San Diego.

After graduating from San Diego High School, she worked at Convair Corp. as one of the many “Rosie the Riveters” supporting the war effort.

Mrs. Foxworth’s life centered around loving her children and husband of 57 years. David Foxworth and Dorothy Foxworth lived on Skyridge Lane, in Escondido prior to her passing on November 15.

Mrs. Foxworth helped raise her three grand-kids, Thaddeus Burcham, Taylor Tolpingrud Barre and Emily Lurvy and delighted in her three great-grand-kids, Thaddeus Jr., Teagan and Jessie James.  Dorothy was preceded in death by her youngest brother James Burnett.  She will be interred at Miramar National Cemetery on Monday, December 4 at 10 am.