“Don’t Breathe”: Lives up to its name 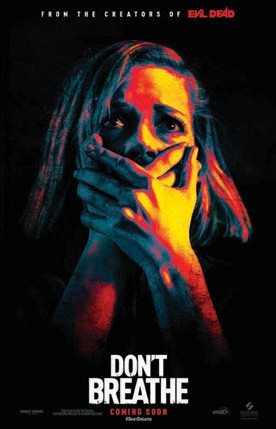 “Don’t Breathe” is what I like to call an “Is That So Hard?” movie. I ask that question not of the film, but of other films. In many ways, this film is simple. Ninety percent of it takes place in one setting. The number of cast members with more than one scene can be counted on one hand. It doesn’t do anything groundbreaking with its story or storytelling. The technical aspects, while I’m sure extremely difficult for a layman to perfect, can probably be accomplished by numerous industry professionals. In other words, this isn’t a particularly “hard” movie to make. And yet, it’s one of the best movies I’ve seen all year. Other movies surely have competent people working on them, why can’t they be as good as this one? Is that so hard?

For plot, you’ve got three burglars breaking into the house of an unnamed blind man played by Stephen Lang. Lang is one of those great underused veteran actors whose mere casting makes the movie all the more promising because it shows the filmmakers have good judgment. The burglars are Rocky (Jane Levy), the one who only steals to support her family; Alex (Dylan Minnette), the nerdy naysayer who always wants to back out for fear of getting caught; and Money (Daniel Zovatto), the dumb violent one. It’s Money who brings a gun along on the job, and he is the first to find out the hard way that they’ve messed with the wrong blind guy.

The best part of the film is the middle, where the blind man and the burglars cat-and-mouse each other. The burglars want to get the blind man’s stockpile of money and escape the house, though they might have to settle for just escaping. The burglars have a numbers advantage and sight, while the blind man has heightened senses, a military background, a knowledge of the house, and one of the scariest dogs in movie history. He can also turn off the lights and disorient the burglars, which raises the question of why he has functioning light bulbs in the first place.

The breathless (aha!) intensity of these scenes is excellent, but what I really like is how the movie makes it hard to decide who to root for. In a lesser movie, this would be a bad thing, like the movie forgot to make its heroes likeable or its villains that bad. But here it makes for twisted psychological warfare. It’s heartless and wrong to steal from a blind veteran, and it’s easy to see why he’s reacting violently out of fear. But perhaps the breaking and entering warrants a less severe punishment than what the blind man seems to have in store for the burglars. There’s a debate to be had until the blind man turns into an unquestionable villain.

Thanks to a convoluted twist, the third act of the movie becomes more violent and torturous. It’s here where Lang gets the majority of his dialogue (it’s mostly of the strictly-functional “Who’s there?” variety up to that point) and he nails it as expected. It’s also here where we get a moment destined to go down as an all-time cinematic gross-out champion. It’s horrifying in a way not typically associated with horror films. But the trade-off is that the mystery and ambiguity are gone, and with it a lot of the film’s intrigue and appeal.

Good for “Don’t Breathe” for being a horror movie that earns its scares with a tense atmosphere and doesn’t rely too much on cheap tactics like jump scares, freaky imagery, or sick violence. These horror staples are not absent, but they’re at least minimal. And while it runs out of steam toward the end (especially after that gross-out scene, because you’ll be dwelling on it the rest of the movie), that middle part makes it all worthwhile. If you’re up for an R-rated horror movie, breathe this one in.

“Don’t Breathe” is rated R for terror, violence, disturbing content, and language including sexual references. Its running time is 88 minutes.