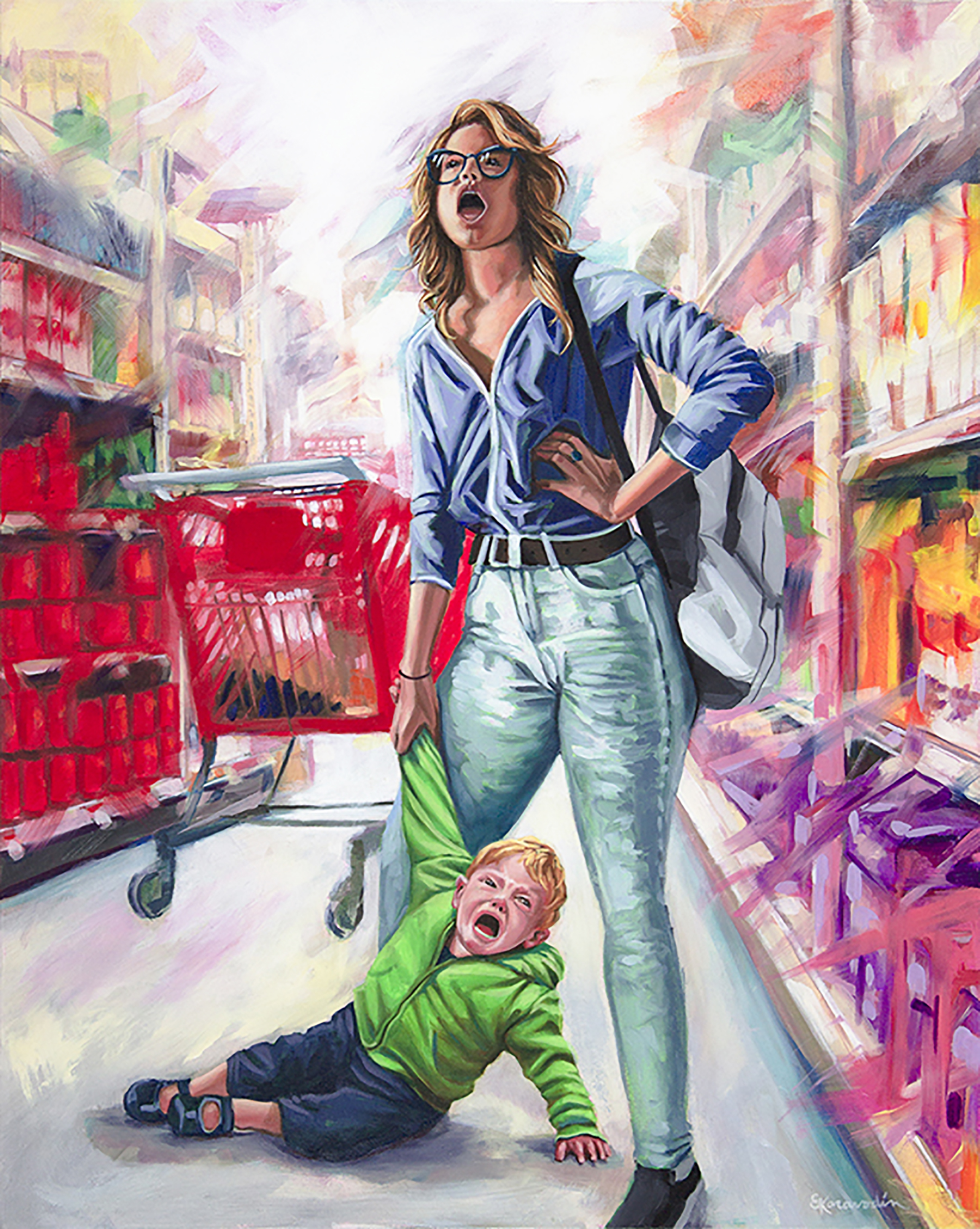 “I’m a Mother!” one of the works on exhibit by Elena Karavodin.

Elena Karavodin was born in Los Angeles and raised in Encinitas. She is a second-generation American tracing her roots back to the 19th century Russian sculptor M.O. Mikeshin. Surrounded by a family of artists, scientists and engineers, her interests always remained toward the arts. She studied classical piano and writing before committing herself to painting. She began her formal art education at Laguna College of Art and Design in Laguna Beach, receiving her B.F.A. with an emphasis in Illustration.

Soon after college, she apprenticed with several local artists, eventually leaving to pursue her own artistic path. In 2010, Karavodin joined the collective of ArtHatch’s Studio Artists in Escondido and contributed as ArtHatch’s Gallery Manager for almost 5 years. She now works in her home studio. Her work has been shown in various group exhibitions throughout the United States. Elena lives in San Diego with her family and young son, who’s daily discoveries and growth inspire her to push her creative process even further.

Karavodin commented: “My show highlights a variety of vignettes focusing on women in control, going against the grain, and exposing their own desires and vulnerabilities. I paint loose with bright colors. I love telling stories with all my paintings. This show will challenge the stereotypes of women portrayed in art. My aim is to make people laugh and feel empowered. I will be donating a portion of the proceeds to The Malala Fund, a non-profit organization that aims to provide education to girls around the world in impoverished, prejudiced, and war-torn areas.”

Gallery Director – Melissa Walker said: “I have been watching Elena’s work evolve for many years. She has seamlessly transitioned from painting beautiful flowers to taking on  some of today’s darkest world events. I can truly see her indomitable passion come through these works.  I recently acquired a very different piece by her – titled ‘Change My Mind.” It’s of a pissed off bride  smoking a cigarette and drinking a glass of champagne in a graffiti filled bathroom. Every day I look at this piece and smile. Elena created a show of these ‘aha’ moments, ones that make us smile, laugh, scream, or cry. So far, I am thrilled with the emotional body of work she has created.”

The opening reception with the artist, live music, ArtHatch open studios, Stone Beer, and BK Cellars wine will be on Saturday, March 9 from 6-10 p.m.