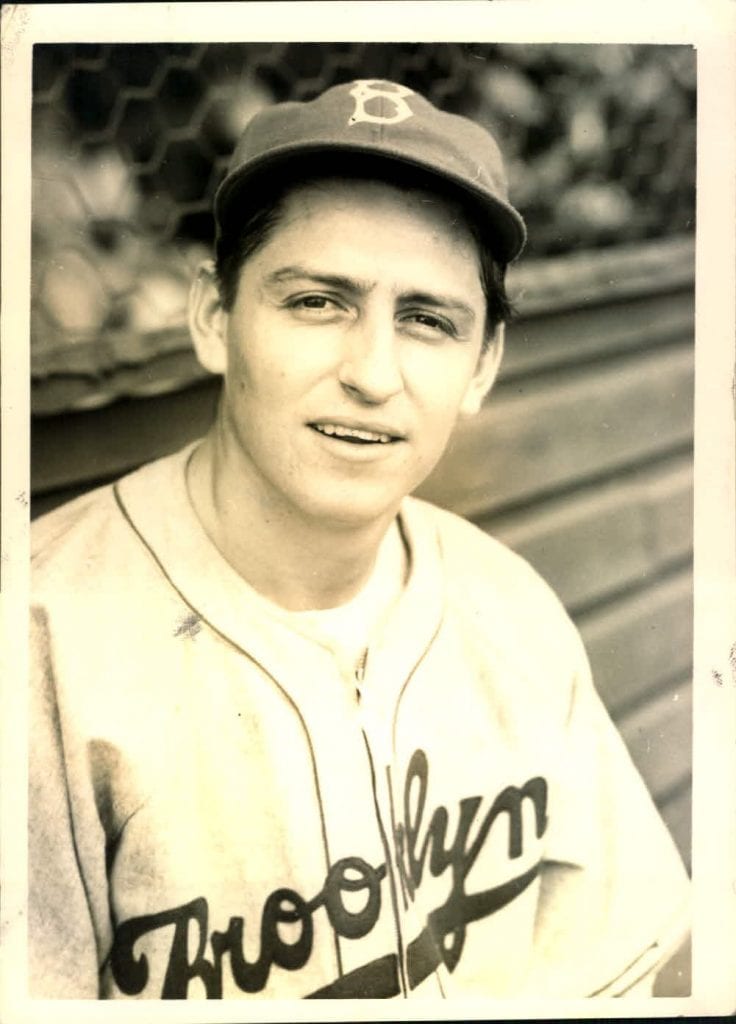 Yes, because I have covered the Escondido High baseball team on their home diamond, I had become aware of him.

How could it have been otherwise when his name is emblazoned on the scoreboard beyond the center field fence, announcing to all those in attendance that it is on Pete Coscarart Field that the Cougars do their thing?

But despite the fact that I consider myself knowledgeable about the game, its history and a vast number of players, I must admit Coscarart was a mystery. To me, he was as unknown as is the current catcher for the Modesto Nuts of the California League.

For whatever reason, I never felt motivated enough to find out about Coscarart’s background. That is, until recently. Just by happenstance, I came across a list of former major leaguers born in Escondido and sure enough, there was Coscarart’s name front and center.

So at last, my curiosity finally piqued, I decided to do a little research on the man deemed worthy enough to have a ballfield named in his honor.

It turns out that Coscarart (1913-2002)  was not only a damn fine ballplayer but he was also a pioneer in attempting to form a players’ union intent on negotiating pension benefits. And because of his commitment to that cause, he was in all likelihood blackballed and sent to the minors, never to return to the bigs.

His baseball legacy speaks not only to his notable exploits on the field but also to the shady and shabby way the powers that be stuck it to him both while he was still playing and long after he had moved on from the game.

Coscarart’s baseball journey makes for a fascinating narrative not only because of its own special uniqueness but because of some of the true baseball titans that crossed his path.

Born on a farm in what is now Rancho Bernardo, Peter Joseph Coscarart spent part of his youth rounding up horses and sheep. It wasn’t until his family moved into town that he began playing ball at the age of 10. Though he entered Escondido High as a rather scrawny teenager, by the time he had graduated, Coscarart had blossomed into a three-sport star who’d become a legend on the local playing fields.

But by no means was the right-handed Pete the only baseball standout in the family. Older brother Joe was an infielder who was good enough to play for the Boston Braves for a couple of seasons. And then there was a middle sibling named Steve, considered by Pete to have been the best hitter of the three. But a beaning in the minors derailed Steve’s career and dashed the hope that all the Coscararts would experience a major league dream.

Leaving San Diego State Teachers College (later to become SDSU), Pete signed with the Portland Beavers of the Pacific Coast League before joining the Brooklyn Dodgers in 1938. When he struggled at the plate (hitting just .152 in 32 games), the Dodgers farmed him out to Nashville of the Southern Association and it was there that Coscarart caught fire, batting a fine .315 while showing his considerable fielding chops as a slick second baseman. His splendid play was hard to ignore and as a result, he was invited back to spring training with the Dodgers the following season which positioned him to soon earn a starting role.

In his first full season in the “Show,” the 5-foot-11, 175-pounder quickly earned the reputation for being a defensive whiz that could also swing the stick as his .277 average and 22 doubles would attest.

A year later, Pete continued to shine. Picking it like nobody’s business and rapping out even more two-baggers (24) while belting out a career-high nine homers and driving in 58 RBIs, Coscarart earned the distinct honor of being selected to the National League All-Star team. Facing the immortal seed-chucker Bob Feller in his lone ASG at-bat, Coscarart fell to Feller’s wicked fastball and was a strikeout victim.

Coscarart was also on the field one fall afternoon in 1941 for a World Series game that became legendary. On the verge of tying the Series at two games apiece, Brooklyn was undone when a third strike that would have ended the game eluded star-crossed catcher Mickey Owen and enabled Yankee outfielder Tommy Henrich to reach first base safely. Henrich would eventually score, the Yanks would rally to win and the next day New York wrapped up the Series. Fairly or not, Owen, a top flight receiver, was forever stained by that infamous passed ball. And in the game’s depressing aftermath, Owen was reduced to tears.

During his four-year stay in Brooklyn, Coscarart formed a double-play combination with a pair of shortstops who would go on to become household names in Leo Durocher and Pee Wee Reese. But when veteran second sacker Billy Herman arrived on the scene, the Dodgers opted to go in another direction and traded Coscarart to Pittsburgh after the 1941 campaign.

But the “Bounding Basque” as he was known because of his nimble play and ethnic background, still had plenty of productive baseball in front of him. In his first year in “Steel Town,” he manned the shortstop spot but returned to his more accustomed second base position after that.

Coscarart’s most productive season with the Bucs came in 1944 when he hit .264, stole 10 bases and established career bests in doubles (30) and hits (146). His play was of such high caliber that he was once again named an N.L. All-Star.

And then came the fateful year of 1946 when Coscarart proved to be ahead of his time when he strongly supported efforts to create a union that would negotiate for player benefits. Thus, he and a minority of his Pirate teammates voted to strike but at the time that move proved to be more symbolic than anything else.

Coscarart’s decision to play a prominent role in seeking rights for ballplayers cost him big-time. Rather suspiciously and probably not coincidentally, he soon found himself sold to the San Diego Padres of the Pacific Coast League and in essence, banished from the major leagues. It didn’t take a Sherlock Holmes to figure out that Coscarart had ruffled the feathers of the baseball establishment and there was a price to be paid for such perceived temerity.

Ironically, in 1947 a pension plan was actually adopted but Coscarart would never benefit from it —but more about that later.

Though it wasn’t the bigs, Coscarart did enjoy his time with the Padres, relishing in the pleasant climate, the team’s impressive fan support and the fact that he could drive home to Escondido after the games.

In a major league career that debuted on April 26, 1938 and ran through May17, 1946, Coscarart finished with a .243 average, 399 runs scored, 269 RBIs, 129 doubles, 28 homers and 34 stolen bases. And at a time in baseball when defensive skill was greatly esteemed, Pete was acknowledged to be a true master with the glove.

After his playing days were over, Coscarart went on to scout for both the Minnesota Twins and the Yankees and among the players he signed was the accomplished Graig Nettles. He also became a real estate broker and pursued that profession for nearly 30 years.

In 1996, Coscarart was accorded the high honor of being inducted into the Brooklyn Dodgers Hall of Fame. That same year he and other well-known ballplayers from his era such as Dolph Camilli, Frankie Crosetti and Al Gionfrillo sued major league baseball for lost benefits and the right of players to receive royalties for use of their images and memorabilia prior to 1947. They ultimately lost the case when the California Supreme Court ruled against them.

Sadly, it turned out that had Coscarart not sued, MLB would have given him his benefit program like it did to other pre-1947 players.

As he grew older, the injustice of Coscarart’s predicament was exposed by the media but the support and sympathy that it engendered never translated into tangible results. Late in his life and with his health failing, a direct appeal was made on his behalf to Commissioner Bud Selig to right a shameful wrong and give Pete his modest $10,000-a-year benefit plan. But that request apparently fell on deaf ears because nothing was done. Baseball’s apparent grudge against Coscarart remained relentless.

But when an aneurysm took his life at age 89, this gentle and good person who relished the fans, loved the game and was so instrumental in eventually empowering his peers, left a legacy well worth remembering in so many ways.

A few days ago, I had no idea who was Pete Coscarart. Now that I do, I’ve been moved by the details of his compelling story. Escondido High did itself proud by naming its ballfield after such a deserving and laudable man.