Disabled U.S. Marine in Escondido is ‘gifted’ a home 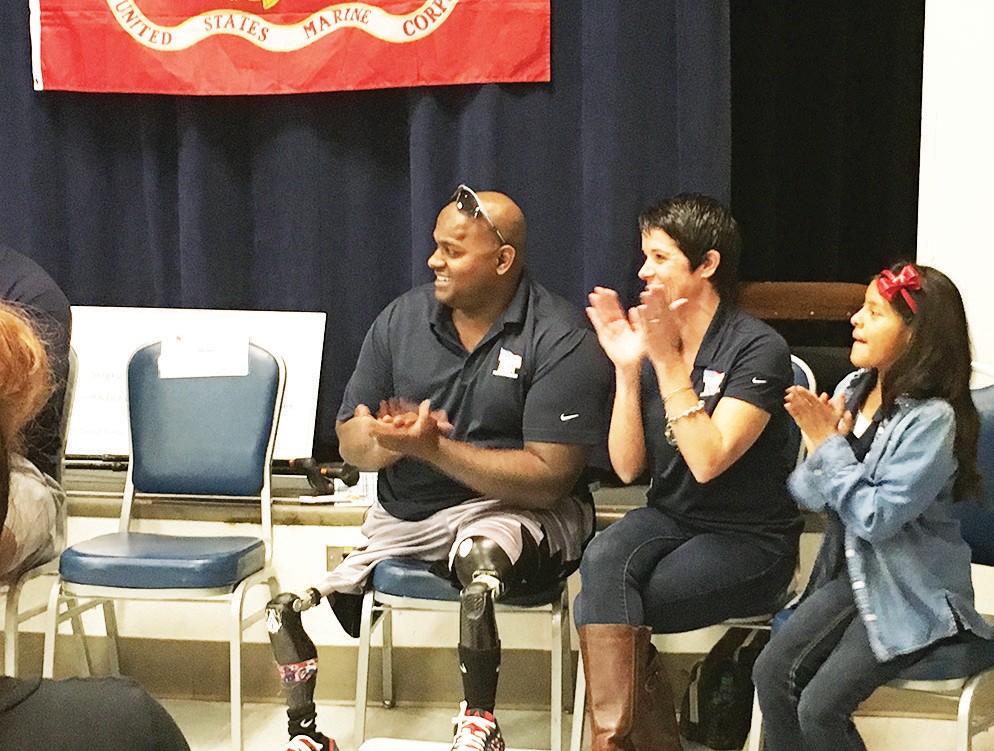 Sgt. Taron Gaal, his wife Lisa and daughter attended the community kick off event in Escondido for Home for Our Troops. A home is being built for the Gaals in Valley Center mortgage free, thanks to the nonprofit that builds homes for injured veterans.

Gaal who is a double amputee, has become over the years a brother to the Escondido Police Department, a mentor to local children and a friend to many.

On Saturday, Feb. 6, hundreds of supporters for Gaal helped the national nonprofit organization, Homes for Our Troops (HFOT), kick off the building of a new home for the veteran. The Com­munity Center was overflowing, includ­ing members of the Escondido Police Department, veterans, and other wound­ed warriors.

“I never had the opportunity to live in an actual community and become fully involved in a community until I came to Escondido,” said Gaal. “I am thrilled to have a house be built here that we can call home.”

Gaal’s journey began on June 26, 2011, when he was on his third deploy­ment serving with the 1st Battalion, 5th Marines in Sangin, Afghanistan. An im­provised explosive device (IED) deto­nated beneath him and the blast resulted in the loss of both legs and a severe trau­matic brain injury (TBI).

After the attack, people nicknamed Gaal as the “Unstoppable.” While spending months learning how to talk again, Gaal was determined to walk. His type of amputation is unique and extremely rare. Having lost his leg, hip, and part of his pelvis on one side and his leg above the knee on the other side, he was told that his life would be spent in a wheelchair.

Since his accident Gaal has been do­ing marathons, CrossFit, competitions, surfing and coaching basketball.

In the summer of 2015, he hand-cy­cled across the country to raise money and awareness about fellow injured vet­erans.

The home being built for Gaal in neighboring Valley Center will help him continue his journey of inspiring others by allowing him to be comfortable and safe in his own home.

The specially fitted house will fea­ture more than 40 major special adap­tations such as widened doorways for wheelchair access, a roll-in shower, and kitchen amenities that include pull- down shelving and lowered countertops. The home will also alleviate the mobil­ity and safety issues associated with a traditional home, including navigating a wheelchair through narrow hallways or over thresholds, riding on carpets, or reaching for cabinets that are too high.

“I face many challenges within my house. I cannot wait to move in,” said Gaal. “These homes are a place where we wounded veterans can feel comfort­able and safe and not worry about cook­ing or getting something from a shelf.”

All costs for the home will be cov­ered by Homes for Our Troops and its network of donors, supporters and cor­porate partners.

Read more about Gaal at www.hfo­tusa.org/gaal.