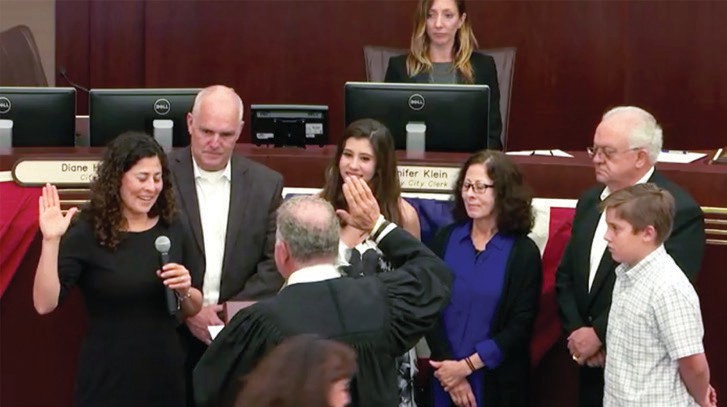 Olga Diaz, left, joined by her family is sworn in for a third term on the city council.

The city of Escondido December 14 celebrated the solemn civic ceremony of acknowledging the will of the voters and carrying out that will with the oath of office. During a special city council meeting incumbent council members Olga Diaz and Mike Morasco took the oath for new terms and a brand-new city treasurer, Douglas Shultz replaced Kenneth Hugins, who held that job for 32 years.

The official Certification of 2016 General Municipal Elections was adopted by the council and was followed by the installation of city officers.

The event was a half hour ritual packed with civic ceremony, pride and emotion — especially for family members of those taking the oath. It was given special significance by the presentation of the colors by the Escondido Police and Fire Color Guard.

Mayor Sam Abed quipped that the ceremony of swearing in new council members occurs once every two years, “and once every twenty-six years for the city treasurer.” A few minutes later he amended that to note that Hugins actually served for 32 years before retiring.

Hugins thanked the “many people who have helped me over the years.” He said he worked with a lot of mayors during that time and they had all been gracious. He especially thanked Deputy Mayor Morasco for having introduced him to Doug Shultz, who served 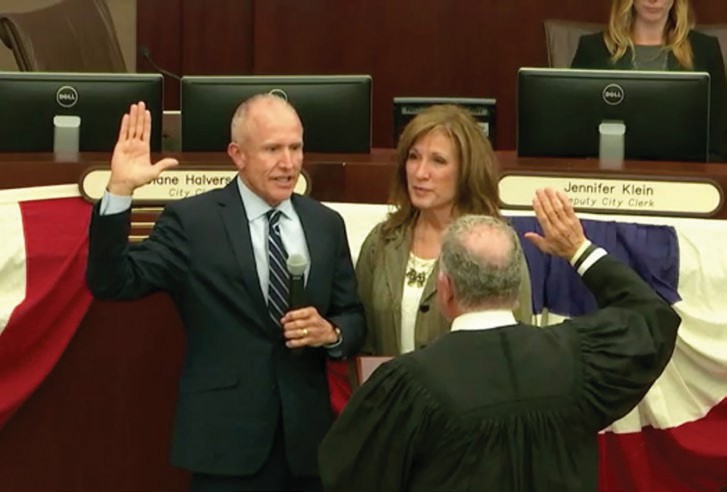 Mike Morasco joined by his wife Jill, takes the oath of office for a second term.

for a time as a volunteer in the treasurer’s office — learning enough to parlay that experience into being elected to replace his mentor.

Hugins added, “I wanted to thank the citizens of Escondido for giving me the opportunity and honor to serve, to the employees for all the help they have contributed especially in the finance and treasurer’s offices, and to friends and supporters, especially my wife Jill, who been with me every step of the way.”

Returning for a third term, Olga Diaz thanked her parents for the work ethic they instilled in her. Although she often credits “coffee” with giving her the stamina to hold a fulltime job and still serve on the council, she said her parents’ influence made it possible. She also thanked her husband, family and supporters for supporting her belief that “doing what is good and right is necessary and someone has to do it. “

She recalled that when she first took office she was considered too radical, “but over time I have won over many skeptics.” She said she hoped the council’s shared experiences would help them work together for the good of the city.

She added, “The most frequent comment I hear from residents is that it is obvious I think about the effects of my votes — and I take that as a compliment.” She quipped, “My council peers would be lost and bored without me. I intend to keep the best 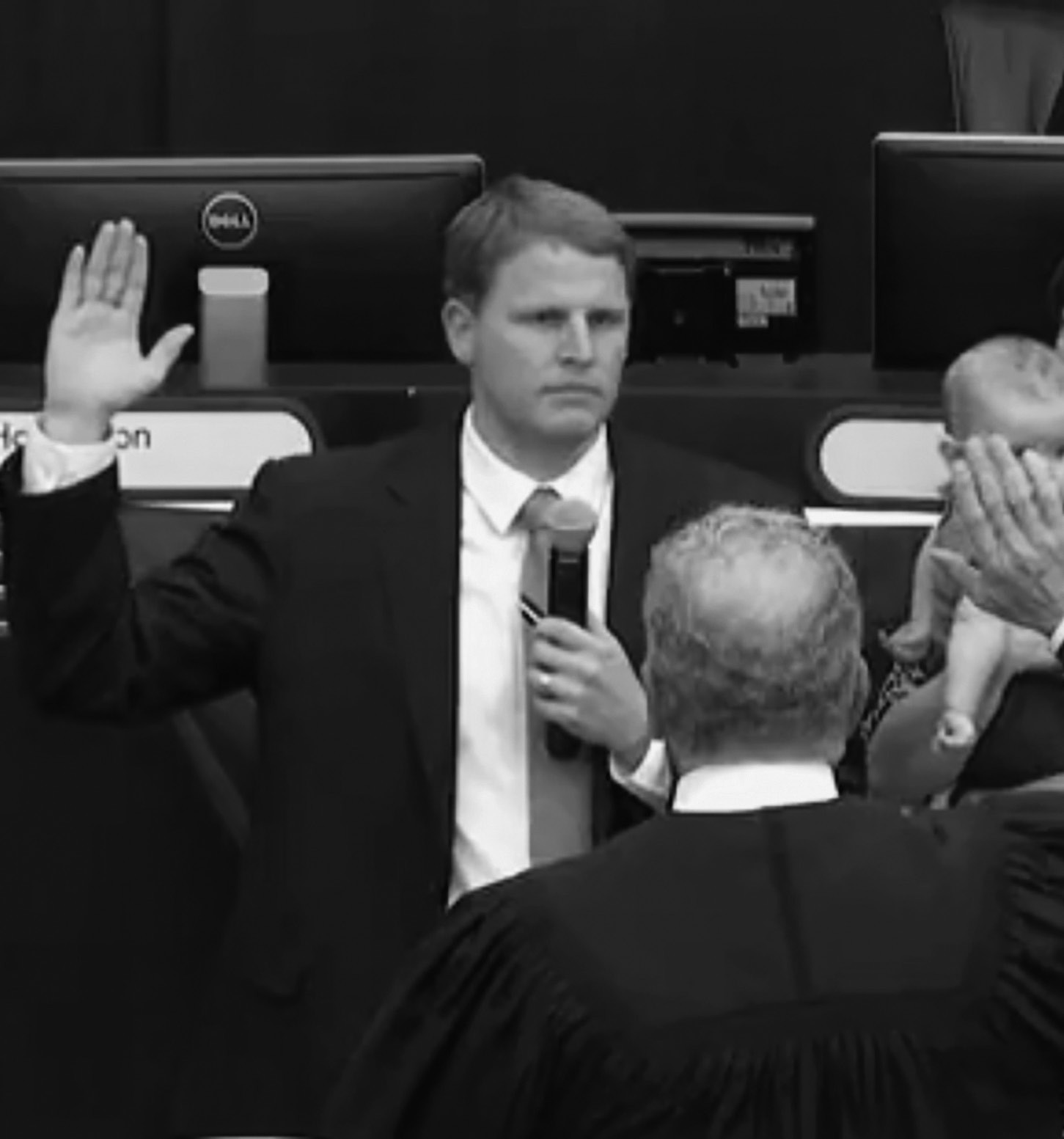 The first new city treasurer in 32 years, Doug Shultz is administered the oath of office.

interests of all residents at heart and in mind as we move forward. I hope to make you proud.”

Mike Morasco kept his remarks short because, he said, his mother was waiting with the family to celebrate her 92nd birthday at Joe’s Italian Diner. He thanked everyone “for the faith you demonstrated in me and the opportunity to serve as council member and two years as deputy mayor.” He added, “The city has been our home since 1967. I love Escondido and the people here, and the opportunity and diversity.”

The election campaign, he said, “was challenging. I had an opponent who became my friend during the course of my campaign. We are going to be seeing Ingrid Rainey a lot more. It was a gentleman and gentlewoman’s campaign. I think we proved it could be done. it’s unfortunate that we both live in the same district or we would have voted for each other.” He turned to Diaz and with a smile said, “Olga, you are right. It would be really boring without you.”

Incoming Treasurer Doug Shultz thanked his supporters and family. “It was a great opportunity to volunteer in the treasurer’s office and to now take the next step,” he said. “I’m really excited.” He said he had been inspired by his grandmother, a longtime Escondido resident who served many civic functions, including on the school board. “I’m really excited to get to work and roll up my sleeves and get going.”