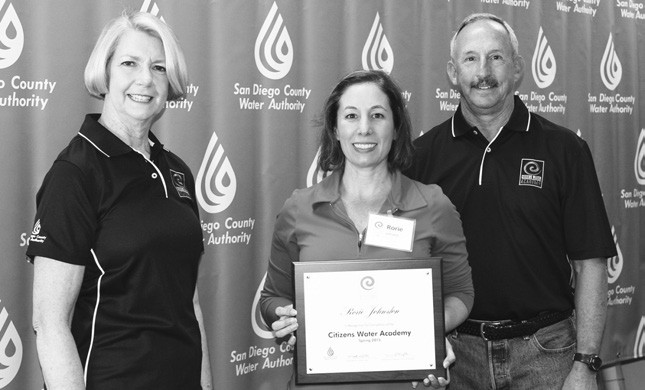 Rorie Johnson (center) with her diploma for attending the Citizens Water Academy.

As a recent graduate of the Citizens Water Academy, sponsored by the San Diego County Water Authority, I have become keenly interested in our current water resources and future water needs.

Considering the length and severity of our current drought, and the recently imposed 25% water restrictions directed to the State Water Resources Control Board, now is the time for all of us to conserve this natural and necessary resource.

Water is not an abundant luxury for San Diego. The earliest recorded drought was on July 16, 1769 by Father Junipero Serra of the San Diego Mission on Presidio Hill. “The water supply was not reliably sufficient to sustain the crops.” After five years, the Mission relocated six miles east to its present site in Mission Valley where a dam could be built to water the crops during the dry season. The San Diego Mission dam and flume, built from 1803 to 1817 by Diegueno Indians and Mission padres was the beginning of water development in San Diego. Until 1946, San Diego remained solely reliant on its own water resources. Following World War II, the population doubled from 300,000 to 600,000, significantly increasing the demand for water. With the threat of the water supply being stripped in the current drought, it became necessary to import water. Through the directive of Franklin D. Roosevelt, the U.S. Navy built a pipeline connecting Metropolitan Water District’s Colorado River Aqueduct to the City of San Diego and into the just completed San Vicente Reservoir. On November 26, 1947, the first Colorado River water flows into the dam, thus allowing San Diego to continue to flourish, as the county was now able to provide water to meet current and future demands.

Metro Water District remained the only imported source through 1992, making up 95% of San Diego’s water portfolio. With the 1987 – 1992 drought, and the severe shortage allocation plan affecting more than half of the city’s water supply, diversification became the number one priority for the San Diego Water Authority.

Needless to say, the current water portfolio is vastly different than the 1992, 95%/5% portfolio, allowing San Diego to better handle the recurring droughts. However, 13% of the current portfolio is through conservation, or reduction in our current and future water needs. How is this reduction accomplished? A major improvement for water conservation was the lining of the Coachella Canal, greatly reducing the loss of water through absorption. Another is by reducing the need to use water on landscaping by replacing lawns with arid native plants. New housing developments are more water friendly, and with family homes consisting of multiple generations, the individual water use is also reduced. Some of the water conservation changes took place in the 1990’s with the development and implementation of reduced water use toilets, thus saving gallons per flush.

We will also gain additional water when the Carlsbad Seawater Desalination “Poseidon” Project comes on line this fall, delivering water to the Twin Oaks treatment plant. The water will already be potable, but for distribution and to not significantly change the taste of the water currently being delivered, it will be mixed with the water already coming through this plant. To further bolster the portfolio, the Water District has developed and is currently testing purification of tertiary water. Also, by increasing the water storage capacity with new dams and restructuring the San Vicente dam, San Diego County is well positioned to maintain its current growth rate and weather the dry seasons.

San Diego continues to grow with 2/3 of the population increase from natural births. From 1990 through 2014, the population of the San Diego region increased 29%, economy increased 82% and the number of jobs increased 34%. However, water use decreased 11.7%. An interesting fact as development and population growth would naturally increase the need for water. However, smart planning, conservative use of water, implementing new water sources and being wise with the water we have readily available from every tap is foundational to a healthy economy and thriving communities.

I will continue to quench my thirst for knowledge regarding water as I engage with the San Diego County Water Authority and Metro Water District. One thing is clear; water is truly a precious resource. Using it wisely is everyone’s responsibility. In light of the recent mandatory water restrictions, take some time to investigate your own water use. Make sure irrigation use is according to drought guidelines, fix any leaks, only do full loads of laundry and remind restaurants that water should only be served upon request. These are minor adjustments. For more information, go the San Diego County Water Authority website and check out the “When in Drought” information at www.sdcwa.org/whenindrought.

While you are soaking up the California Sunshine, remember to pray for rain!

Rorie Johnston is President/CEO of the Escondido Chamber of Commerce.