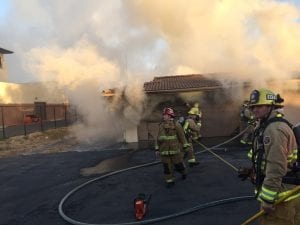 On August 17, at approximately 6:53 PM, the Escondido Police and Fire Communication Center received several reports of smoke coming from a building behind McLeod Mortuary at 1919 E. Valley Parkway. A structure fire response was dispatched to the location. The first arriving engine reported a large amount of smoke coming from a detached garage to the rear of business.

Aggressive action by the firefighters contained and controlled the fire in approximately 20 minutes. The garage sustained moderate damage. There were no injuries to firefighter’s or civilians. In all, five fire engines, one truck, one rescue ambulance and one Battalion Chief responded to the fire.