Despite being in a minority, Senator Jones has his wins 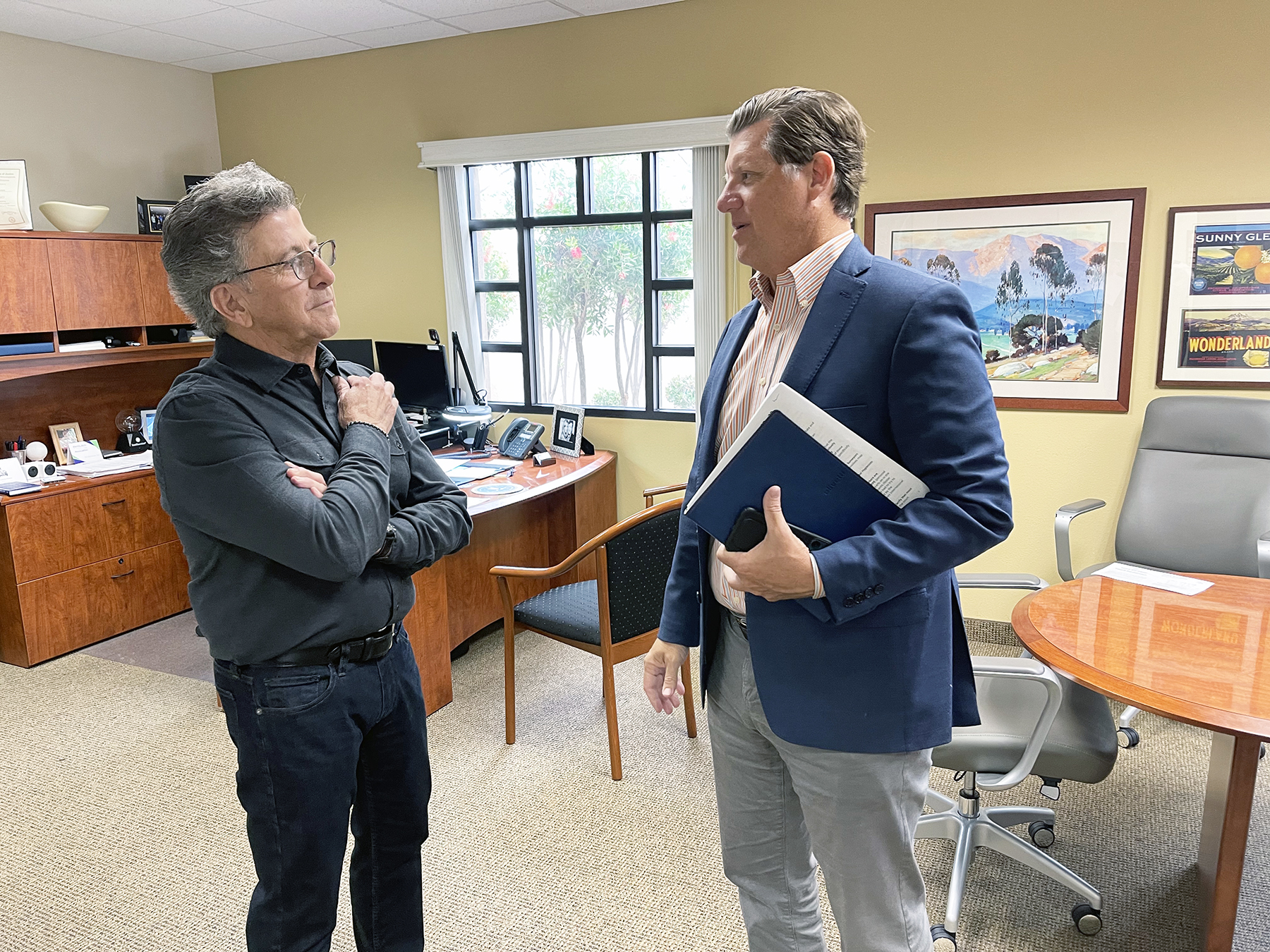 Escondido Chamber of Commerce CEO James Rowten (left) chats with Senator Brian Jones, who visited the Chamber office on Tuesday to talk about various issues of the day, and recent bills that have become law.

Senator Brian Jones of the 38th District dropped by Escondido this week on a wide-ranging tour of his district. He has announced that he is running for second and final term in the Senate and this week held a campaign kick-off in El Cajon.

He and his staff visited the Greater Escondido Chamber of Commerce office and chatted with the Chamber’s CEO J.R. Rowten about issues of the day, such as the recently passed and signed Senate Bill 9, which simultaneously explodes the power of cities to control housing density and delivers a comeuppance  to NIMBYs everywhere; the pilot program for a mileage tax the senator describes as “very unpopular” and, of course, the homeless problem. He noted that although California accounts for 12% of the U.S. population, it has 50% of the nation’s homeless.

The senator is often asked by enthusiastic constituents if he is ever going to run for governor, who think he would make a good governor. “I don’t necessarily disagree with them,” he said, but he answers, “As soon as you find me $20 million as the down payment for running, I will consider it!”

Because of the failed recall, does the governor and a legislature feel unbound and empowered even more than before?  Jones replied, “The best way I can answer that is I don’t know yet. The jury is still out on that. There’s one major component that could modify the governor’s exaltations and that is he has to run again for election in a year. The General Election is certainly a different turnout model than the recall election. It won’t impact the legislature’s attitude at all. They already feel that way. They moderated themselves a little bit in August as a result of the recall. There were some really bad ideas that the authors didn’t move forward at the governor’s request. I’m hoping that same attitude will go into next year but some of my colleagues don’t feel like they should be moderated. And so they will probably move forward with some of their very worst ideas.”

He discussed SB 8 and 9 and SB 10, which have all been signed by the governor. SB 9 makes it easier for homeowners to build a duplex or split their current residential lots. SB 8 curtails local governments’ abilities to downzone and limits fee increases for housing applications. SB 10 simplifies the California Environmental Quality Act (CEQA) requirements for upzoning—giving cities the ability to rezone easily and allow low income housing.

SB 9, which Jones voted against, “usurps local authority.” He also voted against SB 8 but for SB 10 “because it maintains local control.” He commented, “What is amazing, is that it’s all the liberal areas that have shut down development are now in the legislature trying to overturn their authority. Most of these legislators came from those cities.”

One of the questions he asks constantly is, how there can be housing needs when people are moving out of the state so that California has lost a congressional seat? “I ask that question all the time of consultants. I ask developers that. I ask Chambers of Commerce that. If people are leaving the state why is there a shortage of housing? I think the bottom line is we have a long-term shortage of housing that we haven’t caught up.”

He notes that this is the first decade since California became a state in 1850 that it didn’t pick up a seat or multiple seats of Congress with each 10-year census.

Commenting on the many businesses fleeing the Golden State for states often called “The Sunbelt,” Jones quipped, “You say ‘sunbelt,’ I say ‘freedom belt.’ Look at those states that started losing seats. It’s a trend that doesn’t turn around easy. I think the current situation is political, people are tired of taxes and the oppressive regulations.”

Jones was put on the spot to analyze the losing ways of the state GOP.  In other words, just how incompetent is California’s Republican party? “Here’s the problem with the GOP,” said Jones. “It has a lot of smart, brilliant people. The problem is we haven’t found a way to work together as a team. It’s not a matter of incompetence it’s a matter of too many rugged individuals. It’s like herding cats.” He continued,  “We are better now than we were ten years ago. There are fewer situations where the Republicans have a chance to win and a bunch of people pile on to run against the one who has a chance to win.”

But obviously the GOP hasn’t reached enough unity to start winning elections again. “We’re not there yet and I don’t have a solution yet,” he said. “We need to unify, work better as a team but we are not there yet.”

One challenge that makes it hard for Republicans to get their message out: “California’s institutional media protects California Democrats from anything bad happening in DC. And flip side, institutional media connects the state GOP to anything bad happening in D.C. There are more Republicans in California than any other state; we just haven’t found a way to craft a message that resonates with our base and appeals to on the line voters.”

California’s homelessness problem, he says, can be attributed to recent laws coming out of Sacramento, “Although the voters need to take responsibility for Prop. 47 and 57,” which raised the limit to $950 before theft of property is considered a felon.

“When you make it harder to prosecute for grand theft, you are going to get more of it,” said Jones. “There are situations where criminals go into stores with a calculator so they don’t go over the $950 limit. There is an  attitude in California that if you lower punishment there will be more recidivism and less crime and that’s not a fact.”

Anything that decriminalizes drug use and lowers sentencing for meth, heroin, drug and needle possession and makes it harder to take off the streets, “Increases homelessness. The easier that you make it to be a criminal, the more criminals and more homeless you get.”

That criticism does not apply to single moms or dads down on their luck, or who have lost a job and are living on the streets. “They don’t  want to be homeless and in California there are many resources to get them off the street. I think we do a good job of finding those people. That’s a temporary situation.”

Asked what the $13 billion that Governor Newsom has budgeted for homelessness will accomplish, Jones said, “It’s making some hotel owners rich as the state buys their property and turns it into homeless housing.”  He added, “The one question no one is asking is where were these people five years ago? Some are being imported.”

Five years ago, said Jones, “some of these people were in jail. Five years ago some of them weren’t addicted to drugs. You can’t convict and prosecute a drug dealer as easily as you could then anymore.”

Despite being in a minority in the Senate, Jones has found ways to serve the public, to pass some bills and to help constituents with problems they encounter in dealing with state government.

Jones reaches across the aisle a lot, an absolute necessity considering how few Republicans there are in the Senate. “I need to get at least twelve Democrats to agree with me to pass anything.”

He added, “You’ve got to focus and you have to pay attention to the things you can, I got six bills passed this year, more than any other Republican.” He added, “I think this is the second year I’ve done that. These are real bills that do real things for Californians that are important.”

He added. “You’ve got to find your lane and focus on what you can accomplish while messaging on things you hope to be able to impact.”

These are real bills that do real things for Californians that are important, he said.  “You’ve got to find your lane and focus on what you can accomplish while messaging on things that you hope to be able to impact.”

Finally Jones talked about the recently passed bill that creates a pilot program for taxing cars for the miles they drive. “This is very unpopular with the public. We don’t get any notes in favor of VMT (vehicle miles traveled) tax. Nevertheless, it’s being promoted throughout the state.”