Delight of France is moving

Will transport you to Paris—without the Paris part 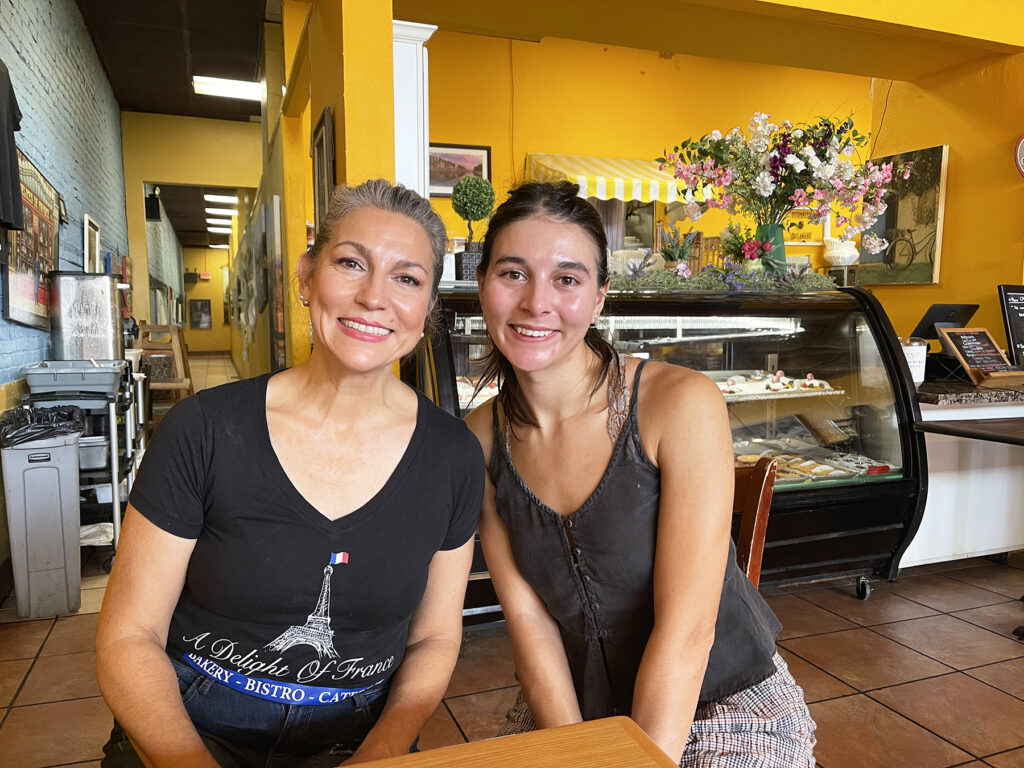 The mother-daughter team of Alberta Agyan and Grace Hall.

Sometime this year (they hope) Alberta Agyan and her daughter Grace Hall plan to open The Delight of France at a new location in the two-story building at 122 East Grand Ave. that used to house Bellissima and is next to O’Sullivan’s Irish pub.

“We’ve outgrown this location,” said Mrs. Agyan, co-owner of the business that has been an icon on Grand Avenue for a dozen years. “It’s been time to move.” After looking to lease another location, the family realized that it would be smarter to buy.

Exactly when they open, as is often the case, will be determined by the city’s permitting process, which, to put it politely, takes its time. “I’d love to be open by the holidays,” said Mrs. Agyan, but that will depend on when permits are approved.

Meanwhile, they are knocking down walls to create an entirely new look for the French bakery and restaurant. Downstairs the restaurant will be divided. To the left customers will order pastries and coffee drinks at the counter and sit to enjoy them, much as they do today. On the right will be a sit-down restaurant with servers.

“I think of this as a whole new exciting adventure. I can’t thank our community and my customers enough,” said Mrs. Agyan. “They kept supporting us through the last couple of years. I never thought I would be owning a new building but it’s because of our faithful customers. I hope to give them back a place they will be proud of and can come with family and friends for years to come!”

The décor will be different from what customers are used to. There will be white walls, wood, natural greens and lots of black wrought iron. “It will be an all-new format, a nice look but we’ll still have lots of quality pastries. It will be a romantic dating spot, where you can go to Paris without actually going to Paris.” Mrs. Agyan added, “I’d like it to be an experience.”

Another member of the family, Greg, the chef, plans to introduce a lot of new dishes, “to make it look like a new, fresh place.” Many things will remain the same, such as their most popular bakery items, the almond croissant and the macaroons, which are consistent favorites. They make everything from scratch, from macaroons to pate aux choux, the breading used for eclairs, tarts and croissants, including chocolate croissants. And, of course, quiches. “We make it all,” said Mrs. Agyan. “That’s why we look tired!” Those croissants take about three days to prepare, which is why they often sell out.

Croissants and other baked delicacies were their salvation during the depths of the pandemic; when they became a mail-order supplier. “It kept us busy and helped a lot during the closure,” she said. They ship for birthdays and other special occasions. “It smells so good when you open it.”

The new space has its own parking in the back. This may also be used for outdoor dining, said Mrs. Agyan. Because of the increased flexibility, they also plan to add dinners, probably most days of the week, except Sunday, Monday and Tuesday. But that’s all tentative.

They are interviewing chefs since they will be expanding the kitchen staff. Several quality chefs are interested. Mrs. Agyan’s husband has a background in French cooking and she trained under him and is now the full-time baker. Their son, Greg, is the head chef.

As soon as the family saw the upstairs of the building, they began thinking of the possibilities. Co-owner Grace Hall looked at the space with the eyes of a new bride. She recalls,  “The wheels started to turn. I realized we would be able to have a nice large kitchen. I was even more excited about the great upstairs space.” She realized its potential. “Getting married brought home to me the possibilities of the upstairs for a wedding venue.” The space, which can accommodate 75-100 people, could also be used for other events, including as a ballroom. “It will have a bridal and groom suite,” she said. “It will be nice and offer amenities. It will be a place where they can get married and go to the next room for dining.”Her job might be described as maître de. She meets people, runs daily operations, maintains payroll, keeps the inventory stocked and does many of the things her mother once did before she became the full-time baker.

“I’m more than excited,” she says. “We’ve been wanting to do this for so long. This location served us well. But we outgrew it. We originally thought of expanding to Del Mar but that fell through due to the pandemic. For which we are almost grateful.” She added, “So we focused here on Grand and toward a bigger building. We said, ‘Let’s grow with Grand.’ We love this community. I was born and raised here.” Growing with Grand became even more desirable when the City began the renovation of Grand Avenue, the first phase of which was completed in June.

Patrons are excited about the plans, said Mrs. Agyan. The extra space is needed. “It’s getting to where we are very busy on weekends. We want elbow room and space. We will also have noise buffers because noise has always been an issue here.”

Speaking of sounds, they also plan to bring live music to the new space—probably on weekends. They have actually done that before, and it was pretty successful! “In this little space we used to have dancing! Now we will really be able to do that.”

Currently they have 26 employees. They will have from 30-40, adding more servers, chefs and bakers. It’s a true family business, with mother, daughter, father, son, daughter and nephews handling various duties. But they consider everyone who works at the bakery part of the family.

Mrs. Agyan added, “The city has been so great with us. I plan to go talk to them to try to speed up the process. What I have learned through the COVID years is that everything will be OK. It will open when it’s supposed to and it will be nice.”

Grace Hall concluded, “We’re very excited to grow with our community. That’s where our heart has always been. I’m very glad to be doing it with the community that we love to serve and where I grew up. We want this to be home for many years.” 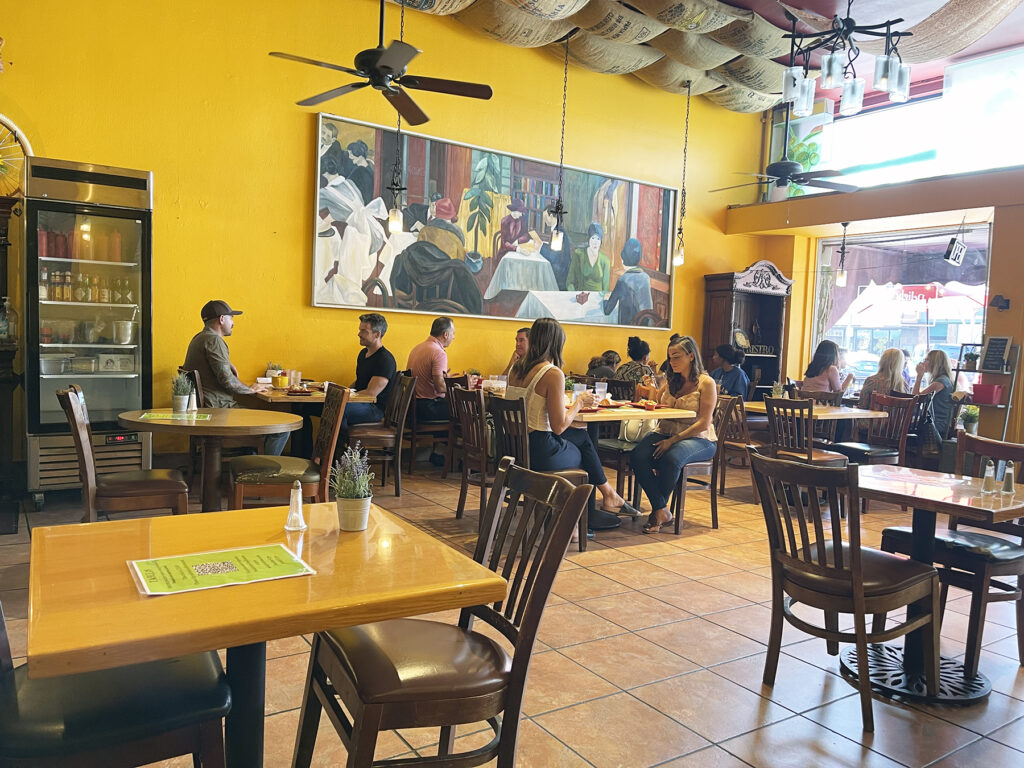 Moving down the street will enable the Delight of France to much enlarge the space devoted to dining.

One response to “Delight of France is moving”