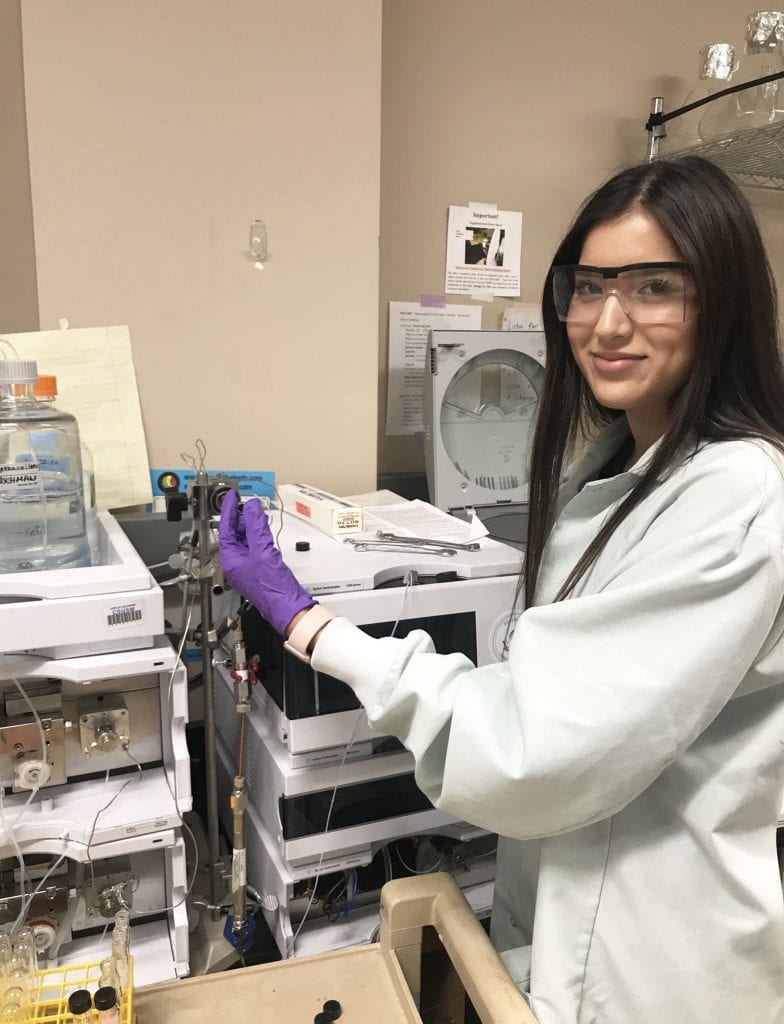 Esthela Barriga, now a senior at Del Lago Academy applied for and was awarded a SEED fellowship (a program that provides opportunities to lower income students) in chemistry.

She worked with Dr. Jacqueline Trischman at Cal State San Marcos’s department of chemistry and biochemistry during the summer along with two other students, one just graduated from San Pasqual HS and the other is a student at CSUSM .

Esthela’s work was titled: “Using Chemistry to Investigate the Behavior of the Hermes Copper Butterfly: The Discovery Of Rhamnocrocin.”

The focus of the work was on molecules contained in a local plant that a particular butterfly feeds on.  The students isolated an array of molecules and chose one to investigate and determine the structure.

As it happens, the molecule they chose and structurally elucidated turned out to be a novel molecule.  They were able then to name it. They presented their findings at both CSUSM and then at the National Conference of the American Chemical Society in San Diego!

The Hermes copper butterfly relies on the spiny redberry bush (Rhamnus crocea.)  The plant population is decreasing in San Diego County and the butterfly is considered vulnerable.

The research began using available extracts from the plant to determine some of the variety of molecules that it contained.  HPLC (high performance liquid chromatography) was used to separate different molecules.  One of the molecules was chosen and then purified.  NMR (nuclear magnetic resonance) was then used to determine the overall composition of the molecule.

Other methods such as COSY and TOCSY among others (spectrophotometric methods) were used to determine the 2-dimensional structure.  From this work the students determined that the molecule had never been described previously.  They were able to name the compound, rhamnocrocin.

Esthela Barriga described her experience:  “The internship at Cal State San Marcos was truly one of a kind. I was able to develop HPLC methods to purify the newly discovered compound, as well as, get the structure elucidated using ESI-MS and NMR experiments.”

The Del Lago senior added,  “Actually conducting the experiments was astonishing. Due to how I had only read and seen these experiments, but physically conducting them was simply incomparable. Also, this experience allowed me to recognize that I want to work in a chemistry related profession in the future, in regard to providing service to individuals by performing beneficial research.”

Esthela Barriga concluded, “I am greatly appreciative for the recognition, due to how rhamnocrocin (the discovered compound) is a compound that is found in the plant Rhamnus crocea. This is the only plant that the Lycaena hermes copper butterfly lays its eggs. Meaning if the plant becomes extinct, then the butterflies will then unfortunately become extinct as well. This novel compound can be the reason as to why it is attracted to the plant, which can then be used in the future to preserve the Lycaena Hermes butterfly classification.”