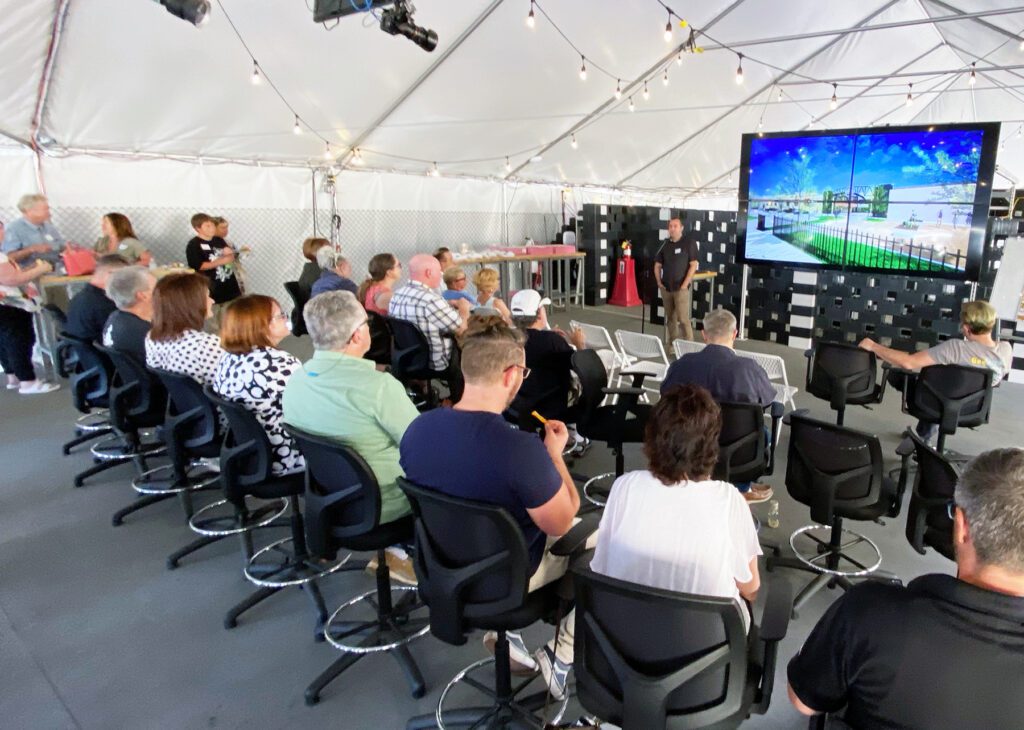 Kevin Meziere of John Paul the Great University talks about the new plans the university has for expanding in Escondido. Photos by David Zumaya

Escondido Downtown Business Association members packed a lot of information into Thursday evening’s meeting—the first one since the pandemic. It happened in a tent adjacent to John Paul the Great University offices.

A face to a name

First off, DBA President Alex MacLachlan introduced Escondido’s new city manager, Sean McGlynn, who “wanted to put a face to the name.” He has already visited several businesses and plans to visit more.

He started his career in New York City in municipal government after 9-11 when Michael Bloomberg was mayor. He served on the Department of Cultural Affairs—working on economic and community development projects when the city was investing $1 billion in culture to help it bounce back after the attack. “New York City understood that the arts and culture are why people come to a city,” he said.

Then he and his wife moved to El Paso, Texas, where he ran the economic development agency, once again attracting arts and culture. He became deputy city manager and interim city manager for a time. El Paso has 700 parks, he noted.

Eventually he moved on to Santa Rosa, in Northern California where he was city manager for six years, and “worked on downtown issues.”

Noting that Escondido also has a downtown, he added, “and we need to capitalize on it. I see a vibrant, twenty-four hours of activity downtown and I want to be a partner with you in achieving that.”

He was city manager when Santa Rosa was devastated by wildfires in 2017. Although McGlynn didn’t mention it Thursday night, he was named 2020 City Manager Foundation’s “City Manager of the Year,” for his leadership. He did mention how that crisis “was a real bonding moment,” for citizens of the city.

“There is so much here and I’m excited,” he concluded.

Kevin Meziere, chief financial officer and chief operating officer of university—which hosted the event in a tent used for classrooms during  the pandemic—gave an update on the university’s 33,000 square foot Visual Arts and Performing Arts Academic buildings. It will include a courtyard, classrooms and studio.

Meziere, who has been with the university since 2009, said,  “We’re filing the plans with the city in the next two weeks and we will begin building it this year.”

MacLachlan told his members, “This has been a trying year.” He credited Louisa Magoon of the Grand Tea Room with “going above and beyond. If there was a government program she would remind you.” She gave advice to business owners applying for relief funds, he said. 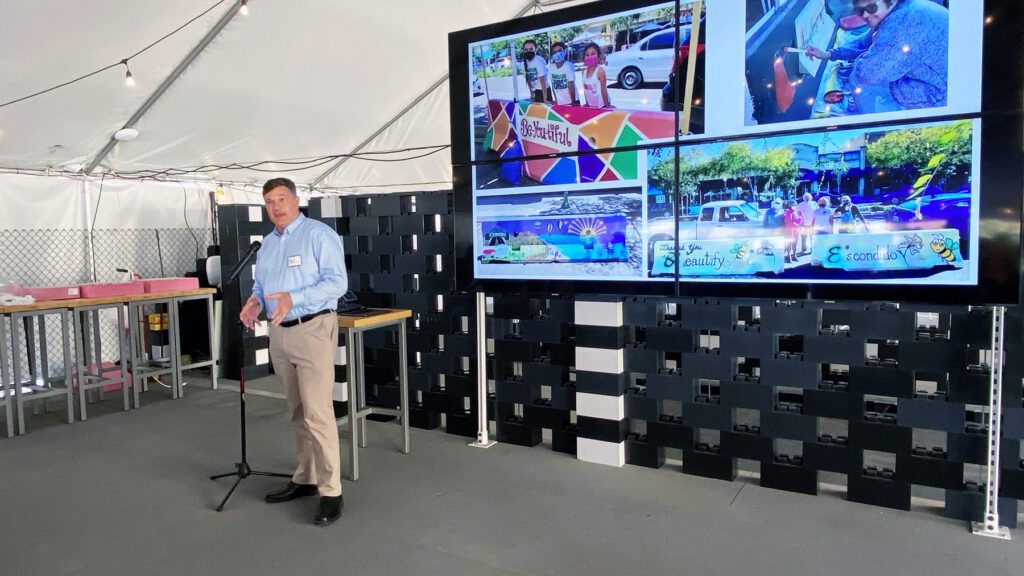 Hammond invited everyone to attend the event. “Come one, come all!” she said. “We look forward to bringing shoppers into the Downtown.”

The height of the afternoon was a presentation by Escondido’s City Engineer Julie Procopio of the “Grand Vision,” how the downtown will be transformed. “It’s a go!” she said, indicating it will begin by the end of the year, with a two and a half month construction schedule planned. With her was Jonathan Schauble PE, a just recruited engineer who is project manager.

The vision started, Procopio recalled, when several businesses approached the city with the idea of revitalizing Grand Avenue. The city used a grant in 2018 to fund the process that began with a series of committee meetings in August 2017.

Phase 1 began with environmental clearance for the Vision Plan, and will continue this fall with lane reduction and diagonal parking along Grand from Escondido Boulevard to Juniper. Medians will be removed from Maple to Kalmia with extended sidewalks on one side between Maple and Broadway and market lighting installed in the same stretch of street.. Buses will be re-routed to 2nd Avenue and Valley.

The next step is to survey businesses as to which timeline for construction they prefer: October to December or January to March. Based on the results the contractor will prepare a construction schedule.

During construction merchants will have front door access for their businesses and sidewalks will be maintained. Except for when sidewalks are being replaced, when access will be in the rear. K-rails will be moved to accommodate construction. There will be some parking restrictions when work is done on a particular section of the street.

Merchants can tell where market lighting will be installed from yellow dots on the sidewalks. Ten feet around clearance will be needed. Restaurants will be asked to make room by relocating tables. The city will do what it can to help merchants remain visible. “We want everyone to know you’re open,” said Procopio.

The changes are expected to generate more economic activity Downtown, said Procopio. “Lodi, California did something similar and saw an 18% decrease in retail vacancy.”

The addition of diagonal parking should add 40 parking spaces, she said. She added, “We want to work with you on permanent outdoor dining,” she said. “We’re open to ideas and suggestions.”

As mentioned above the city will be surveying merchants to find out which dates they would prefer for construction.  It will also be polling businesses on how the city can help them to succeed. “Our goal is to hear from everyone as to what’s the best time to do it,” she said. 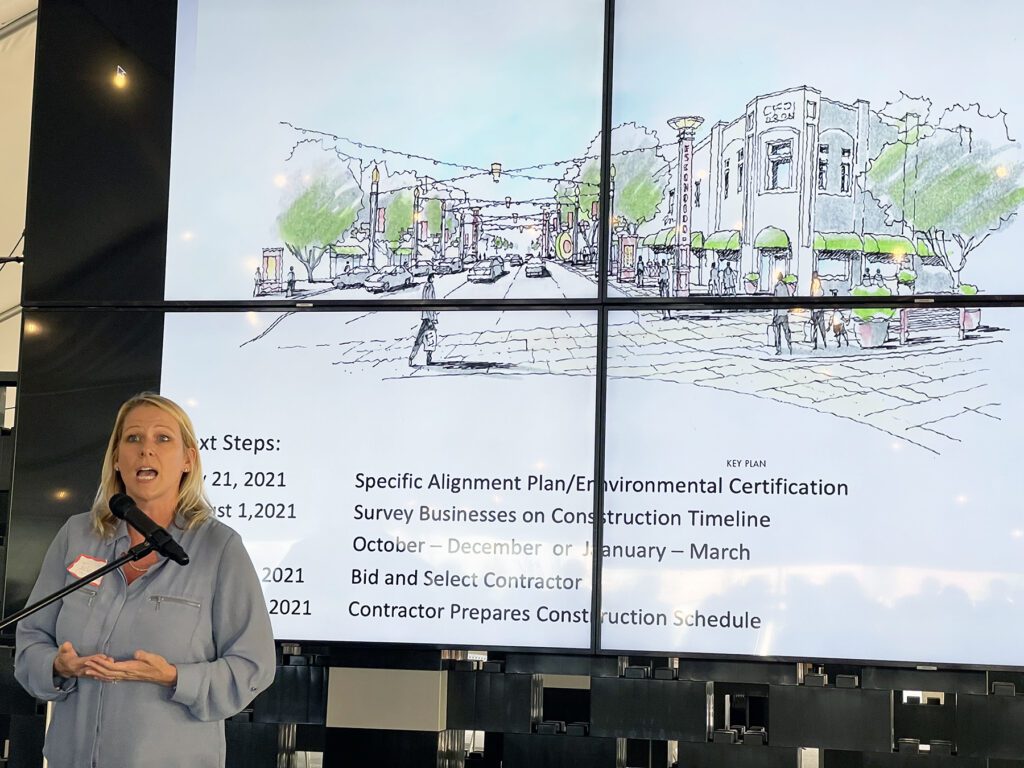 Julie Procopio discusses the Grand Vision plan for Grand Avenue. Merchants will have a choice of when the main work on the street begins. In September or January of next year.

DBA member Carol Rogers thanked Cute Cakes for providing cupcakes and added, “What an amazing community this is! We came together to survive!” She talked about Escondido’s art scene, including the Escondido Alley Art Projects being installed on the alley wall of the John Paul the Great University.

Artists are being encouraged, “to paint from their hearts,” she said and invited those present to attend the second unveiling of alley art on August 14, 5 p.m. It will be south of Grand Avenue between Braodway and Maple. “It will make your hearts sing,” she said.

She mentioned that much of the artistic activities in the city is coordinated through MAGEC (Museums and Arts Growing Escondido Culture) a group of arts oriented organizations that existed well before the pandemic, and which promotes the Second Saturday Art Walk.

“As our new city manager said, art is a big part of Escondido development,” said Rogers. “People come, see and buy. We are bringing people to eat and drink in Escondido,” she said. “We are all artists in our own way.”

David Zumaya of My San Diego North County talked his map project, where he is producing artistic maps for each community in North County, and selling spaces on the maps to fund the project. “We will be printing fifty thousand copies,” he said.