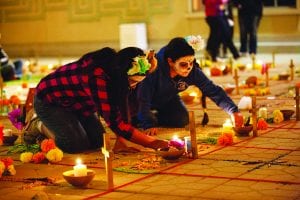 This year North County’s biggest Día de los Muertos Festival gets even bigger as it spans almost the entire California Center for the Arts campus, and moves from one day to four days beginning November 1 at 6 p.m.

Once again, the opening day of the Festival will feature artist Eloy Tarcisio’s altar installation.  This area located in front of the Center Museum, will be open to the public to create their own personal altars of remembrance for loved ones they’ve lost.  Altars will be left undisturbed during the entire length of the Festival. This very popular area will be open to the public at 6 p.m. and spaces will be available on a first come, first serve basis.

At 7 p.m. in the Concert Hall, the center will welcome the most respected Selena Tribute band working today, the Como La Flor Band.

The Como La Flor Band is famous for their high-energy performances and for not only being able to master Selena’s moving vocals and music, but also embody the inspirational spirit which Selena is remembered for.

This will be followed by a meet and greet photo opportunity with the Como La Flor Band.

The Como La Flor Band will also be joined on stage for one number by the winner of the Selena Singing Contest.

From 6-9 p.m., the Center Museum will be filled with arts and crafts for kids of all ages, including: Sugar Skull decorating, tissue paper Marigolds, face painting, and much more.

And, just announced from 6:30-8:30 p.m. in the Center Museum there will be a special meet and greet with Elena of Avalor.

The Lyric Court will be buzzing with entertainment and events all evening, including:

Photo opportunities with El Catrine and La Catrina from 6-7 p.m.

The Lyric Court will also provide a  place to eat the food provided by local vendors, and food trucks like Chilatruck, Thyme Together, Barrilitos Aguas Frescas and El Cevichito.

The Center Museum will also be free and open to the public and will feature an altar created by artist Daniel Martinez and local Escondido students honoring the late John Medina, a beloved Escondido educator. Martinez has also created an altar in tribute to the memory of Selena, which can be seen from the walkway leading to the event.

Join the Center for a fun evening of painting, wine, and friends.

The very popular Palate to Palette presents a special evening for the Día de los Muertos Festival, where you’ll be taught step-by-step how to recreate Diego Rivera’s masterpiece “The Flower Seller.”

The evening will also feature a menu of artisan cheeses, charcuterie platters, and of course wine! 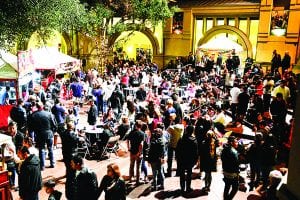 Reservations are strongly recommended so please visit artcenter.org/event/palate-palette-riveras-flower-seller/  for more information and prices.

The Center will present a special 20th anniversary screening of “Selena.” This award-winning biopic starring Jennifer Lopez not only launched Lopez’s career, but was celebrated the world over for its accurate and heartbreaking portrayal of the timeless cultural icon Selena Quintanilla-Perez.

The screening begins at 7 p.m. and seating is first come first served for this free event open to the public. Early arrival is strongly suggested.

Closing out the Día de los Muertos Festival will be a performance of an all-new production “Folklor” by Tierra Caliente Academy of Arts.

“Folklor,” directed by José Jaimes, brings the history of Mexico to life with its unique blend of teatro, ballet folklórico, and live music. The show celebrates life through the cultural arts with a unique educational aspect. Celebrate Día de los Muertos as you travel from Guerrero to San Luis Potosí and more in this sweeping cultural panorama of Mexico.