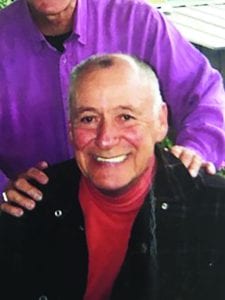 David Wayne Weakly, of Escondido, died on July 8, at the age of 75, after suffering complications from a stroke. Mr. Weakly was born January 22, 1942, in Tecumseh, Michigan to Harold & Margaret.

He was a 1960 graduate of Tecumseh High School where he was a star athlete in football, basketball and track. He served in the Army, and went on to graduate from Ferris State University.

Mr. Weakly migrated to sunny California where he started a career in restaurant management and ownership. He had suffered for many years from MS but always had a good attitude and managed to make the best of things. He had a playful nature, a great sense of humor, and was cracking jokes to the very end.

Survivors include his two brothers, Hal of Michigan and Jon of Arizona, his daughter, Vanessa Ferris and two grandchildren, and his longtime friends Riga, Michelle and Ray.

He was always good for a laugh and a cold one.

David Weakly was tough as a tank and he will be missed dearly by his family and friends. Those wishing to remember him can contribute to The Elizabeth Hospice of Escondido.