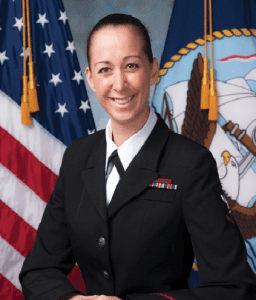 GOOSE CREEK, SC – The daughter of an Escondido, California resident recently received one of the most prestigious military honors as she was selected as Naval Health Clinic Charleston’s “Junior Sailor of the Year.”

Navy Hospital Corpsman Second Class Lauren Pereda, daughter of DJ O’Grady of Escondido, and granddaughter of Mary Ellen and Morton O’Grady of Carlsbad, was named the 2017 Junior Sailor of the Year for NHCC, located at Joint Base Charleston – Naval Weapons Station, South Carolina, where she has been stationed since February 2017.

Pereda, a 2008 graduate of Mission Hills High School, was recently promoted on December 4. She said she is humbled by her recent accomplishments.

“I sincerely appreciate the recognition,” Pereda said. “But it isn’t as much about the rewards as it is about how many people I’ve helped along the way and how much the Navy has benefitted from my contributions.”

The Navy’s Sailor of the Year program was established to recognize enlisted Sailors for their outstanding achievements, exemplary conduct, military bearing, as well as demonstrated initiative and sustained superior job performance.

“She can do anything she sets her mind to,” Anthony Pereda said. “I often think she schedules and plans too much, but she always accomplishes everything on time and better than expected.”

Pereda said she credits her husband and mother for playing a major part in her success.

“I couldn’t have done it without Anthony,” Pereda said. “He’s been the best husband, always supporting all my endeavors and with a smile on his face.”

“My mom would stay up late listening to me practice my Sailor’s Creed and help me study for exams,” Pereda continued. “She is Superwoman and I am forever grateful for her love and guidance.”

NHCC Commanding Officer Capt. Dale Barrette said he is delighted and grateful to have a Sailor of Pereda’s caliber serving under his command.

“She represents the best of the best of our Navy, a true role model,” said Barrette. “She is well known throughout the command as a great source of information, always smiling and going out of her way to be helpful to her fellow Sailors and staff members.”

NHCC Command Master Chief HMCM Anthony Petrone said Pereda’s dedication to self-improvement, development of others and her professional success were key factors in her earning the coveted award.

“Pereda has set a very high bar for herself, knowing that others are depending on her,” Petrone said. “She has always exceeded expectations with her integrity, compassion, problem-solving skills and “can do” attitude. We are fortunate to have her on our team.”

In 2016, Pereda was selected to participate in former President Barack Obama’s motorcade as his personal EMT during his visit to Naval Station Rota, Spain. Pereda was also awarded the Navy and Marine Corps Achievement Medal, Patient Safety Award, and “Hard-Charger” Award in 2015 for leadership while attending the Navy’s Trauma Training Course based in Los Angeles, California.

The next phase in Pereda’s career includes applying to be commissioned as an officer through the Navy’s Physician Assistant Program.

“I look forward to the future,” Pereda said. “The opportunities are endless and each accomplishment is a stepping stone toward bettering myself, Sailors around me, and the Navy as a whole.”