Darn it Escondido, it’s time to wake up to the Sabers 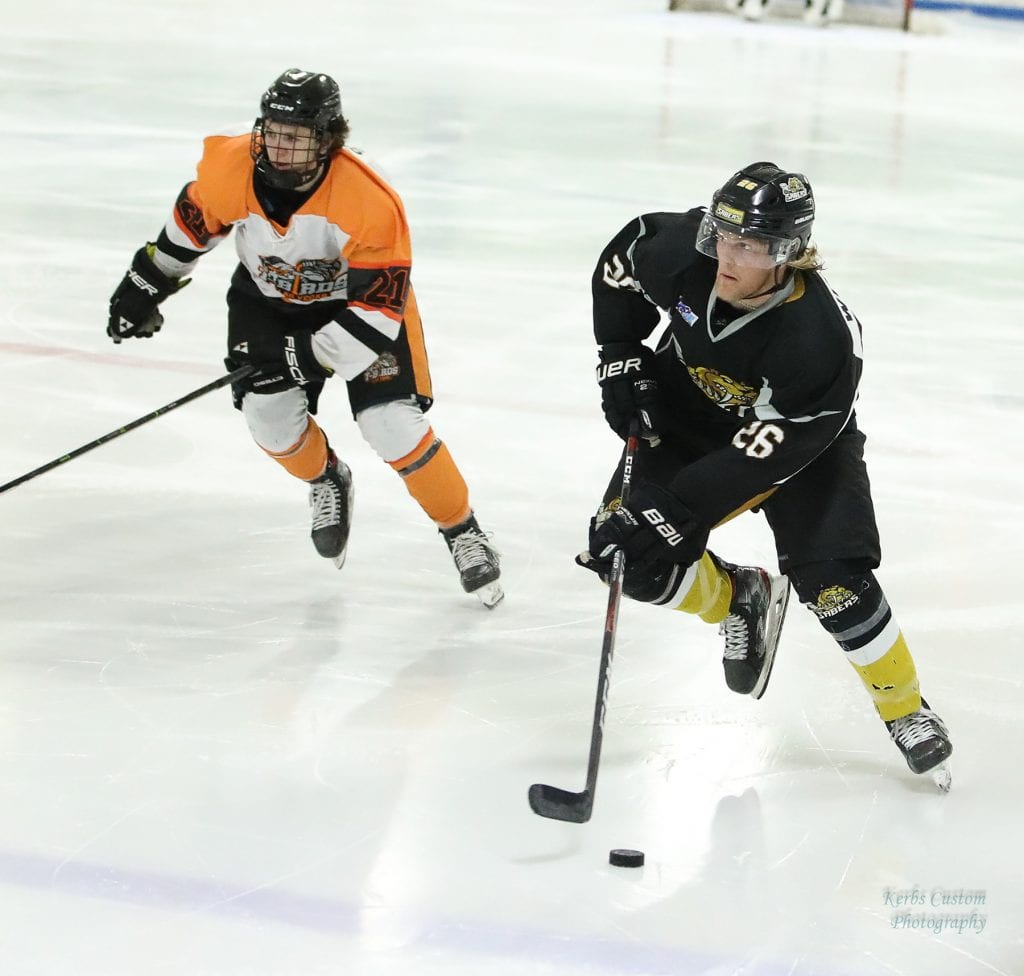 Forward Trevor Wittkopf has played a big role in the resurgence of the Sabers. Photo by Lenny Kerbs

Before we get down to the nitty gritty, let’s get something straight. On balance and for the most part, I consider Escondido to be a solid sports city that shows plenty of love and support to its prep teams and youth leagues. I have no qualms with that side of the ledger. I have seen up close and personal on numerous occasions how this community is capable of passionately embracing its local athletes.

But in regards to the San Diego Sabers, Esco’s own Tier II Junior hockey club, this town has been decidedly out to lunch and to be quite truthful, has embarrassed itself because of its lack of support, involvement and interest.

Under its very nose, Escondido has seemingly turned a blind eye to a remarkable group of young men that has produced a sensational turnaround season, arguably plays with more sustained effort than anyone around these parts and represents this locale with nothing but class and distinction.

I’m left to wonder how in the world can such a deserving and compelling team be treated with such seeming indifference if not downright disrespect?

Some may claim that the sport of hockey just doesn’t resonate here but that’s an absolute cop out for laziness and narrow-mindedness. I guarantee that anyone that is willing to expose themselves to the game in general and this team in particular, will find hockey’s appeal to be real and captivating.

Others might say that they were unaware of the Sabers’ very existence but that’s another lame excuse because just a modicum of investigation about the goings-on hereabouts would have revealed their presence.

I must confess to being really torqued a couple weeks back when the Sabs hosted the Las Vegas Thunderbirds on a Friday night with second place in the Western Division of the Western States Hockey League still at stake. All season long the Sabs had been tearing it up at the local Ice-Plex and winning at a tremendous clip at home. I figured if ever the sports fans of Escondido were going to come out and get behind this determined group, this would be the game.

Man, was I ever wrong! Instead, I was left totally bewildered and somewhat disgusted as only perhaps a third of the stands were filled on such a crucial night. And believe me, the stands at the Ice-Plex are extremely modest in size, tending towards the bandbox variety. It was an inexcusable and pitiful showing as far as attendance was concerned and I thought right then and there that Escondido wasn’t deserving of such a crackerjack team.

Now, that’s not to infer that the Sabs don’t have a loyal and dedicated fan base. It does exist, but its numbers are quite small and nowhere near the kind of support that this gritty team merits.

And so I will briefly try to lay out the case why it’s time Esco gets off its’ collective duff and coalesces behind a club that has represented the city in such a positive fashion.

For starters, the Sabs are relentless in both desire and want-to. Their commitment on both ends of the ice is palpable and their willingness to hit, backcheck and go aggressively to the corners inspires genuine admiration. You will be hard-pressed to find many teams with a higher energy quotient.

Moreover, as far as entertainment value is concerned, the Sabers can’t be beat. They lay it all on the line, play an intense and exciting brand of puck and give patrons their money’s worth without exception.

Then there is the international makeup of the team which adds a fascinating and intriguing component to the club. The Sabers not only have a sizeable contingent from the U.S. but the roster is also populated by players from such far-flung places as Canada, Sweden, Denmark and the Czech Republic.

In David Vychodil, San Diego possesses a commanding and impressive coach whose forceful leadership has transformed a team that had labored in recent years into a formidable and exceedingly competitive unit. Vychodil is a demanding straight-shooter but his charges have responded to his message and are playing with a discipline and accountability that indicates the coach’s approach has resonated loudly with them.

And oh yeah, the Sabs are comprised of plenty of gifted players who are simply a gas to watch.

Active Trevor Wittkopf (53 points) is a swift and clever forward who can buzz up and down the ice. Winger Ondrej Vaculik (29 goals) couples his physicality with moves, legitimate speed and deadeye marksmanship that make him a constant scoring threat. Creative Samuel Kapusta knows what to do with the puck and can give a defense fits. Flashy newcomer Jakub Rusina has provided SD with another bona fide offensive weapon thanks to his conspicuous feel for the game. Plus, there are vital complementary pieces such as William Baird, Quinn Patenaude and Caleb Travis who are constantly in motion, hustling their butts off and doing their share of damage on the scoresheet.

As stellar as their forwards can be, it could be argued that the Saber blueliners might be even more impactful. SD’s defense corps is remarkably deep, notably versatile and dependable as the day is long. Though captain Hunter Howe won’t wow anyone with his size, he is a gutsy performer who reveals a high hockey IQ whether he’s neutralizing rushes by the opposition or orchestrating offense from the point. Multi-talented Deniss Berdniks is reliability personified and has been a mighty force as of late. Rugged and big Axel Tor Svensson can hit, skate, disrupt foes and carry the disc with surprising effect. Dane Benjamin Aakesson is another physical specimen who has a presence about him and excels in a number of ways.

Then there is perhaps the Sabers’ best all-around player Joel Rothman, a defender who can do it all and exudes a confidence that is both perceptible and contagious to his mates. Not to be ignored is Bradyn Barone, another productive blueliner who knows his way around the ice and fits in nicely with his defensive brethren.

As for the goaltending chores, San Diego is blessed in that department as well. The Sabers are one of the few teams in the WSHL that can turn to any one of three goalies to get the job done. In Ludwig Nordqvist, Cal Hunter and Mikulas Pluhacek, SD has a troika that has shown itself to be solid, clutch and for the most part, unflappable. Regardless of who Vychodil turns to during the upcoming playoffs, netminding should be a strength and not a concern.

The WSHL is a developmental league where promising players age 16 thru 20 seek to enhance, grow and augment their game in hopes of attracting attention primarily from colleges on the lookout for prospective talent.

When you watch the Sabers in action, what you see is a contingent of supremely motivated young athletes hungry to prove they can make an impact now and at another level wherever that may happen to be. San Diego went a laudable 31-18-1-1 during the just concluded regular season while amassing 96 points, a figure that far surpassed anything this team has accomplished in a mighty long while. In many respects, the Sabers’ wondrous revival and renaissance this season is one of the greatest comeback stories in the annals of Escondido sports history. Too bad only a hardcore few were around to see it.

But hey Esco, it’s not too late to make amends and give this inspiring club the kudos, the backing and the support it so richly deserves. It’s time this community rids itself of an apathy towards the Sabers that is frankly inexcusable and borders on the absurd.

This coming Thursday (8 p.m.) Friday (8:45 p.m.) and Saturday (7:45 p.m.) nights, the Sabs will play host at the Ice-Plex to the scrappy and not-to-be-taken-lightly T-Birds in a divisional playoff round. In a best-of-three series that figures to be hotly contested, hometown encouragement and a big turnout could conceivably play an influential role in the eventual outcome.

Will local fans finally wake up and give the Sabs the recognition and boosterism they have rightly earned or will Esco continue to neglect a team that has more than done the city proud? It’s a two-way street. The Sabers have certainly done their part but the question remains will this town reciprocate and do what is right and warranted?

Hopefully so, but if not then Escondido’s reputation as a place that embraces a variety of sports and gets behind its own will take a huge and shameful hit.

One response to “Darn it Escondido, it’s time to wake up to the Sabers”