Dancing with Our Stars will raise money for CCAE 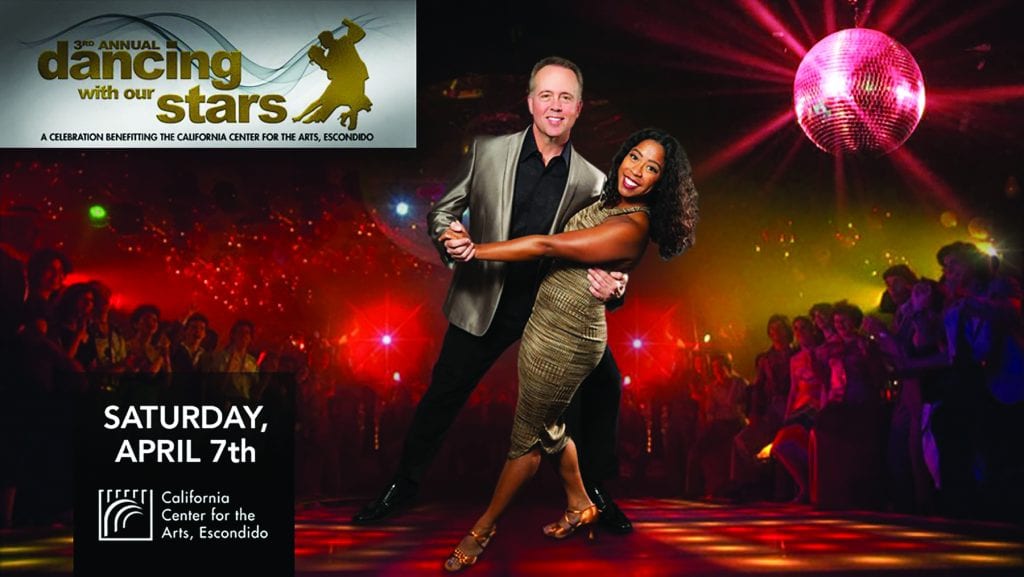 “Dancing with Our Stars” a fund-raiser for the California Center for the Arts, Escondido, will be presented this Saturday, April 7, 7 p.m. at the Concert Hall. Tickets range from $30-$175, but get yours early for the best seating.

Tickets include a post-show party with a DJ and dancing under the stars.  Call the Ticket Office at 800-988-4253 to purchase.

The following celebrity dancers will show off their abilities:

Alvarez is an award winning, bilingual journalist who has worked in news since the late 1990s. Born and raised in Southern California, she graduated from California State University, Long Beach with a degree in Journalism. She began her career at KCBS-TV in Los Angeles as a news assistant. After that, she worked as both an anchor and reporter in Roswell, New Mexico, El Paso, Texas and Orlando, Florida.

Alvarez has covered some of the biggest stories to make national headlines. She reported on the ambush of the 507th Maintenance Company in Nasiriyah, Iraq during the 2003 invasion, bringing viewers up-to-the-minute information from the Fort Bliss army post. She went on to anchor the morning news for KRQE News 13 in Albuquerque, NM and after three years, she came to the nation’s leading independent television station, KUSI-TV in San Diego.

Dr. Bliesath serves her community as a dentist in Escondido. She was raised in Rancho Penasquitos.

She attended the University of California, San Diego, graduating with a Bachelor of Science in Animal Physiology and Neuroscience. Her love of dentistry has fulfilled her desire to connect with people and truly make a lasting difference. She received her Doctorate in Dental Surgery from the University of the Pacific, School of Dentistry, in San Francisco in 2007.

After 11 years in her practice, Dr. Bliesath continues to love dentistry and the impact it has on changing patients’ lives one smile at a time. Her office is her second home and her patients are her extended family. She maintains an active membership in many professional dental associations, including: San Diego County Dental Society California Dental Association, American Dental Association Invisalign Certification, Cerec Certification Spear Education Study Club. Dr. Bliesath and her husband, Joshua are raising their two children, Nicholas, 7, and Lia, 5. She thrives on community service, giving of her time throughout the Escondido community. She also enjoys preparing a delicious Puerto Rican meal, listening to any orchestra with a strong French horn ensemble, and dancing in the living room with her kids.

Sandra DiCicco is a successful entrepreneur and philanthropist whose career started at age 11, when she started her own babysitting business, and opened her first bank account. By age 21, she owned her first restaurant. Over the last 30 years she has built restaurants, created product lines, purchased farms and built homes, creating hundreds of jobs.

Her desire to give started as young as 8 years old. She would collect money to give to local charities such as Jerry Lewis Marathon for Muscular Dystrophy. Her love of children and the family unit was the driving force behind her dedication and contribution to many charities and organizations. She has built houses and donated lunches to Habitat for Humanity, worked in local soup kitchens, and donated Christmas gifts to Children’s Hospital. She reads to under privileged children and sponsors eight children a year. Those sponsorships range from paying for medical procedures and medications to college tuitions and living expenses.

She also aided many young people to build their own businesses. She not only invested in these young entrepreneurs financially but continues to educate and support them along the way. She contributes to organizations such as San Pasqual Academy for Foster Teens, Right for Life, Palomar Hospital, Escondido Community Center, The Boys & Girls Club Greater San Diego, Escondido Christian School, and Rady’s Children’s Hospital.

Angie Lasagna has more than 15 years of experience in marketing, media, public relations, events design and corporate philanthropy for financial institutions. She began as a part time drive up teller at Grossmont Bank and worked up to the marketing department.

Before joining Mission Federal she had worked with Navy Federal starting in 2007 as the company’s Member Outreach Manager. She supported the organization’s strategic marketing initiatives by developing and overseeing marketing campaigns and promotions including special events, fund-raising programs and community outreach in the Southwest Region, covering 7 states.

She has received numerous honors and has been on the board and chaired several nonprofit organizations. She was chairwoman for the Credit Union for Kids Committee. She was honored as chairman for Miracle Maker for Rady’s Children’s Hospital in 2009 and served for five years on the City of Hope Walk Committee. She was volunteer chairman for the Temecula Balloon & Wine Festival for 11 years. From 2003 to 2005, she was a Top 10 Fundraiser for City of Hope and a Top 10 Fundraiser for Kids News Day, Rady’s Children’s Hospital in 2003, and earned a Top Walker Award for the March of Dimes. In 2001 she was presented with the California Bank and Trust All Star Award. Most recently she received another award from Rady’s Children’s Hospital in 2015 for Miracle maker.

Dr. Albert Martinez was born and raised in Albuquerque, New Mexico. He attended the University of New Mexico with a degree in Biology followed by UNM School of Medicine, graduating in 1982. He moved to San Diego to do his residency in Pediatrics and became board certified in Pediatrics. He entered private practice in Escondido and Poway with Children’s Primary Care Medical Group. After 27 years in practice he changed his work affiliation and has been with practicing general pediatrics with Sharp-Rees Stealy Medical Group since 2012.

Dr. Martinez has been married to Natalie Harris Martinez since 1988 and they reside in Poway. They have two sons. They attend the Westminster Presbyterian Church in Escondido where he has been active on the Mission Committee for many years and served as an elder of the church.

Dr. Martinez has traveled to several countries with Project Compassion as medical director and serves on the Project Compassion Board of Directors. He also volunteers as the coordinator/medical director for Camp Reach for the Sky Day Camp since 1984. Hobbies include hiking, fishing and gardening. He has also been an avid equestrian since childhood, riding Western, English, Dressage and trail events as well as jumping and riding for pleasure.

Previously, she was director of Community Relations for Cox Communications, California. Mattson was responsible for the statewide strategic direction of the company’s community relations efforts, including employee volunteerism, the Cox Cares Foundation and its corporate giving.

Mattson also served as president and CEO of the San Diego North Convention and Visitors Bureau for 21 years. She was instrumental in changing it from a city bureau to a San Diego North regional organization creating a distinct destination brand and increasing its revenue from $300,000 to $3.2 million.

Mattson serves on the advisory council for President Haynes of California State University San Marcos, and chairman of the board for Mission Edge and on the boards of San Diego Habitat for Humanity and Boys & Girls Clubs of Greater San Diego.

Mattson earned a bachelor’s degree in public relations/communications from Brigham Young University. She is a long-time resident of Del Mar and has been known to make treks to Mount Everest and Kilimanjaro.

Matt Pound was born in Manassas, Virginia and moved to San Diego as a young child. He attended high school at Orange Glen where he participated in football, basketball, ASB, and baseball. He attended Palomar College where he played two years for the football program before transferring to Tusculum College in Tennessee on a partial football/academic scholarship. He returned to San Diego where he finished his college career online, graduating with a BBA in Marketing from American Intercontinental University.

Pound worked as a substitute teacher at Mission Hills High School while also coaching football and basketball. In 2007, he made a career change and found a passion for the construction industry after working for Wyroc Materials, Titan Transportation, Marathon General, and Hanson Aggregates before joining the Weir Family as GM of Escondido Materials.

Matt is dedicated to making a positive impact to his community and industry, currently serving as the chair of the Economic Development Committee and on the Board of Directors for the Escondido Chamber of Commerce and several construction industry association committees.

Matt and wife Jennifer have been married for 9 years and have 2 daughters Peyton, 8; and Aubrey, 6.

Darren Pudgil is a native San Diegan. He’s a graduate of Chula Vista High School and San Diego State University, where he earned a degree in Journalism.

After spending many years working in politics for the likes of San Diego Mayor Jerry Sanders and future California First Lady Maria Shriver, he started his own public relations firm, Pudgil and Company, whose clients range from the San Diego Tourism Authority to American Medical Response to Newland Communities.

Pudgil enjoys boating in San Diego Bay, socializing in the Gaslamp Quarter where he now lives, and telling anyone who will listen about his football days at Chula Vista High School.

A long-time member of Friends of Journalism and Media Studies at San Diego State, which provides resources to help the university’s journalism students. He’s also donated his time to help put on the first two Dancing with Our Starts fundraisers.

While far from being a professionally-trained dancer, as a teenager he did spend many, many nights south of the border gliding across the dance floors of Tijuana.

Douglas Shultz has resided in Escondido for the majority of his life. His family has lived here for decades and has deep ties to the Escondido community. He and his wife Natalie have 2 daughters, Tasha and Macie. He has a Bachelor’s degree in Economics and a Certificate in Financial Planning from Pepperdine University. He serves as the City Treasurer for Escondido and runs a Wealth Management practice and has worked in the financial industry for more than 10 years.

Shultz is actively involved as an Assistant Scout Master with a local Boy Scout troop and is also a member of the Escondido Sunrise Rotary Club. He also served as a trustee on the Board of Directors for the Escondido Education Foundation for two years. In his spare time he enjoys surfing, movies and spending time with his family.