Dance studio is an Escondido institution

Whether it’s the rumba or the two-step, or anything in between Arthur Murray can teach you the moves 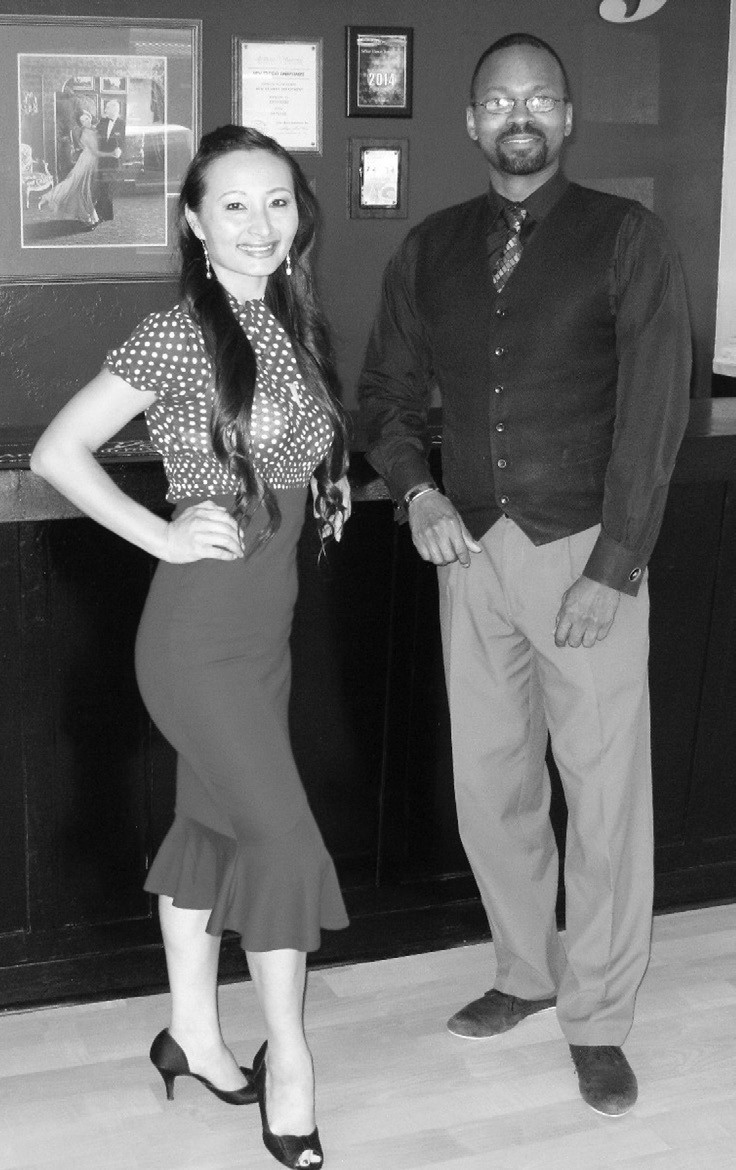 Autumn Dinh and studio Manager Domonique Dawson are ready for customers at the Arthur Murray Dance Studio in Escondido.

The Arthur Murray Dance Studio has been an Escondido institution since 1977, but for many years it was hidden in a shopping center at Felicita Avenue and Escondido Boulevard.

In January 2015, Autumn Dinh opened the studio’s current location at 301 E. Grand Ave. At the southeast corner of Grand and Juniper, it stands as a little beacon, drawing people into the pleasures of ballroom dancing.

“We teach anything that’s is partner dancing,” Dinh said. “We teach for weddings, cruises, parties, for clubs. All of the lessons are done here on site and then our students will go out to whatever party they want. We give them the skills to be able to social dance.”

Dinh is the holder of a franchise in a business that dates back to 1912, when Arthur Murray Dance Studios was launched. She is well versed in the history.

She said that Fred Astaire, who started as a singer and tap dancer, learned ballroom dancing from Arthur Murray teachers and John Travolta learned his moves on “Saturday Night Fever” from them too.

“The Arthur Murray Party,” a variety show featuring Arthur & Kathryn Murray played on all three TV networks from 1950 to 1960, she noted.

The studio won the Escondido Chamber’s Community Enhancement Award for 2015.

“The Chamber of Commerce and the Downtown Business Association have just been wonderful with all the support they’re giving us, in terms of promoting us and getting the word out and just referring us,” she said. “People come in and we ask them how they heard about us and they say they asked the Chamber or even the Visitors Center.”

Cruisin’ Grand has brought a lot of foot traffic to the business, too. “Being that it’s Grand Avenue, and it’s historic, we tried to keep the nostalgic feeling of it in the decor so it kind of ties in with Cruisin’ Grand a little bit,” she said.

The studio is a bright and cheerful oasis where for many years stood the Love Insurance Agency.

Another source of business is the popularity of ABC’s “Dancing With the Stars.”

“Dancing has always been a big part of our society, but that TV show, it has helped our business explode and it has brought our business of teaching partner dancing to many more people.”

Dinh said she is a “San Diego local” who graduated from UCSD with a Bachelor of Science degree in biology and double minor in French literature and Women’s Studies. She is fluent Vietnamese, French and English.

So, how did she switch from biology to dance?

“Oh gosh, at UCSD we had a ballroom dance club, so I would go ballroom dancing to relieve stress and just have fun,” she said.

“And then after college … I said, let me just try dancing and see how it goes and I love how dancing makes me feel. It keeps me in shape and I’m happy when I’m dancing,” she said. “So I tried it and 16 1/2 years later here I am. I’m still doing it and loving it.”

The studio brings in single or married customers and gives each one an opposite sex teacher. It holds a dance night on Fridays for enrolled students and every 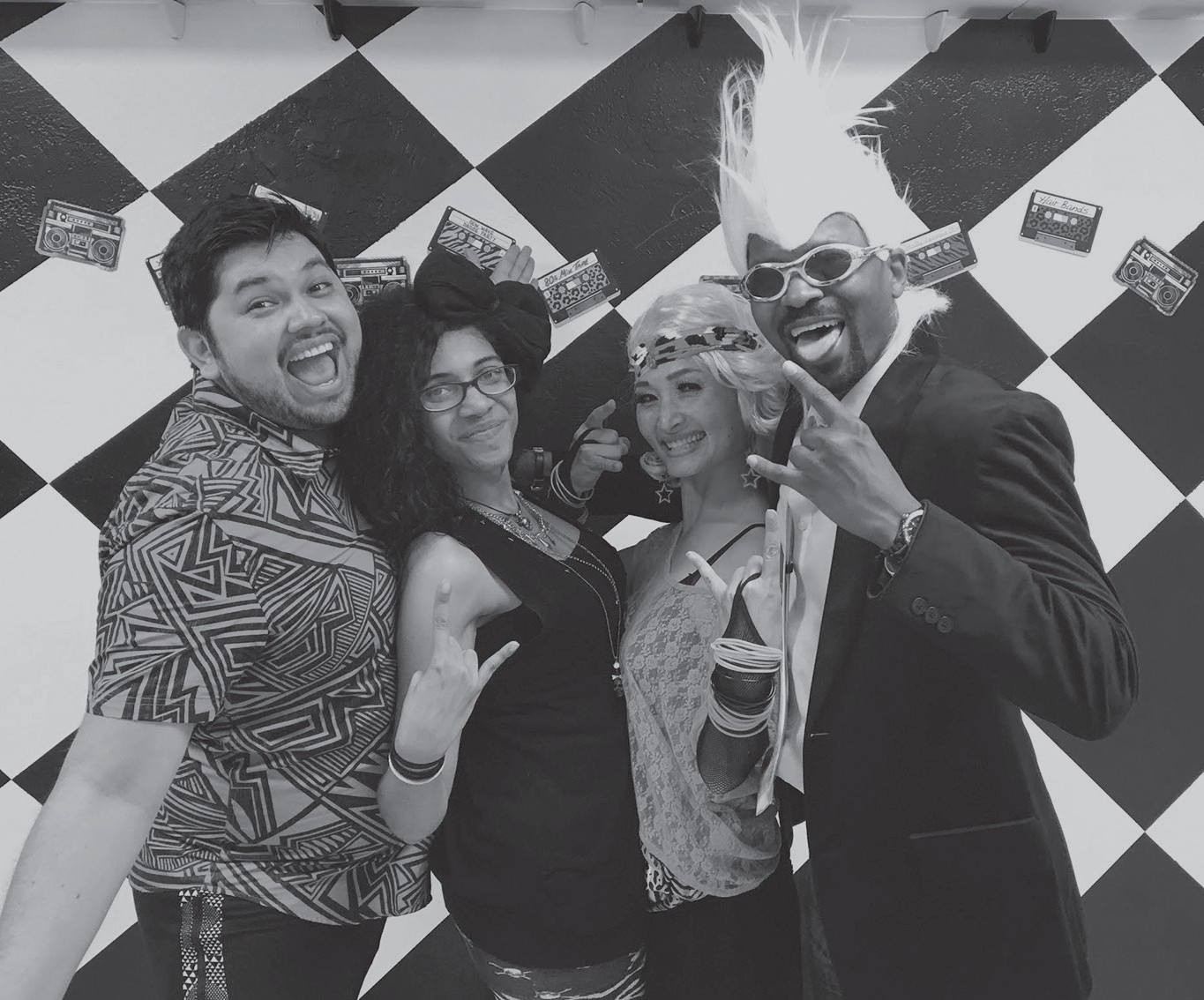 The teachers and students at the Arthur Murray Studio have a lot of fun together.

other month has an open dance night for anyone who wants to drop by.

The past and present student body connects using Facebook to find out when they can go out together a nightclub or dance event. They have been known to show up at the Escondido Elks Club or Club M at the Grand Del Mar.

“We do special groups and we will work out a specific number of dance lessons for the group, in addition to our personal programs, which are individualized, very personalized for the couple,” she said. “If you were to come in here by yourself or with a partner, we would ask you what kind of music you like and what kind of event you’re going to. That way we would teach you the kind of dance you would find practical … It would be tailored to what your dance skills are.”

The most practical dances are the Fox Trot and Swing styles. But there is a wide variety to be learned, depending on the music that the dancers choose. Dinh said that you can learn Swing for one style of music and adapt the basic moves to other styles.

“You have Country Western music that has country swing and country waltz and so on, but once you know how to dance it’s like driving a car, you can get into any car and drive, unless it’s a stick shift,” she said, joking about the stick shift part.

“But that’s the idea, you have a set of skills that you are able to move comfortably around the dance floor and that’s what we have specialized in over a hundred years,” she added.

Men definitely take longer to learn than women. But Amber doesn’t judge those of us who have two left feet.

“Yes and it’s not that women are more talented,” she said. “The men actually take about three times longer to learn and it’s really because they have a bigger responsibility.”

Going back to her car metaphor she said, “He is the driver. He has to pay attention to the operation of the vehicle, to the traffic conditions … and she’s just the passenger so she has to learn to follow.”

“When two people are in a dance, it’s about communication. It’s about leading, which is the man’s role and following, which is for the lady. So it is a non-verbal body language. So ladies don’t actually follow everything and there are points you can learn, but when the movements become more intricate she has to speak the language, you see?”

Does she get women who don’t want to follow?

“Especially very strong willed women. It’s so funny because, especially for married couples who have been married for awhile, so we say well, you’re going to have to relinquish the throne for these minutes when you’re here in the studio.”

She adds that women make a lot of important decisions during the day, “But then when it comes to learning to dance the men have to be reminded that they have to be the decision maker.”

Dancing is “ a wonderful hobby just to have, not just for social reasons, but for health,” Dinh says.