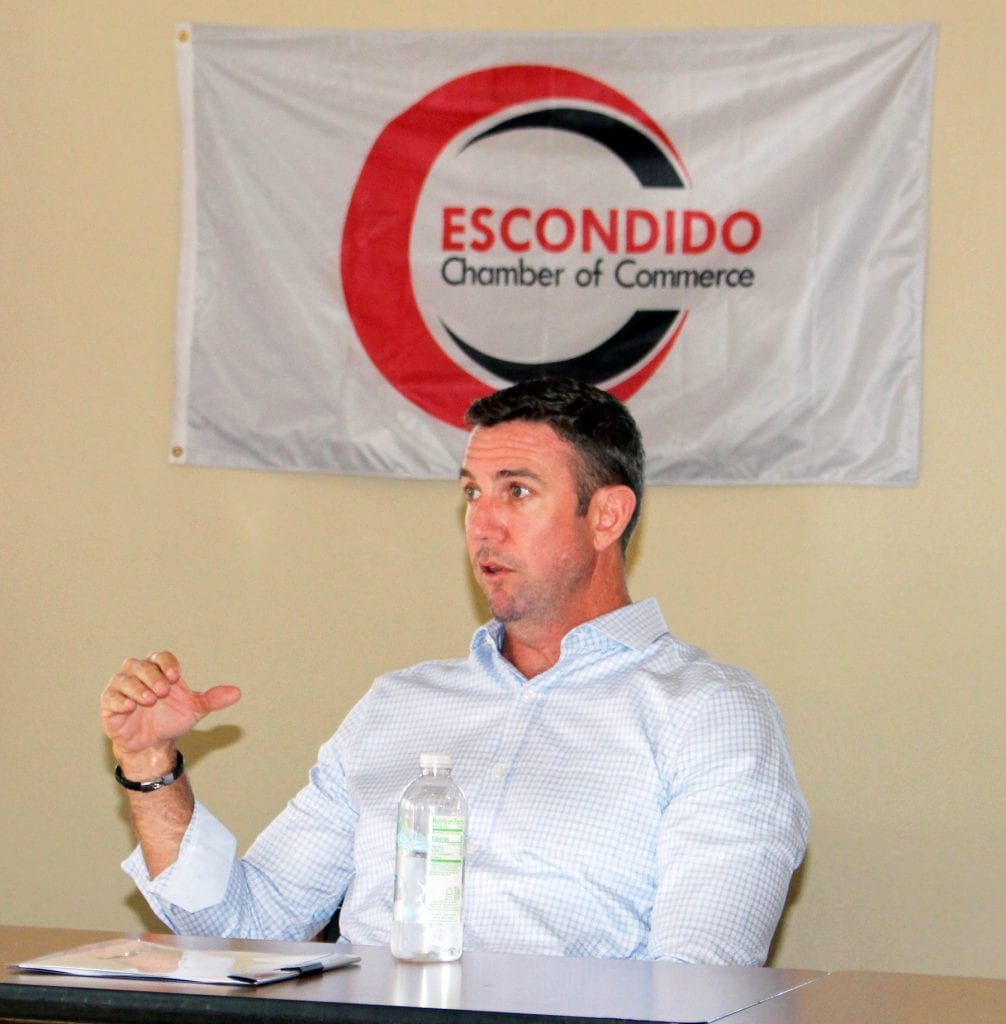 Congressman Duncan Hunter Jr. of the 50th District makes a point during Monday’s roundtable discussion at the Escondido Chamber of Commerce.

In what may be as rare as a sighting of a snow leopard, 50th District Congressman Duncan Hunter Jr. made an appearance Monday afternoon at the Escondido Chamber of Commerce for a “roundtable” discussion that was driven by questions from the audience.

Nothing was off the table for the dozen or so constituents of the embattled representative, who readily answered questions about his federal prosecution, noting that he will go to trial in January, about the same time his case is also coming up for appeal. The primary election for his seat is in March.

He was obviously more comfortable talking about the impeachment frenzy in Washington D.C. that he said is preventing almost anything else from being discussed. Earticularly among members of the House of Representatives. The Senate is a little less frenzied on this issue, he said. Hunter brought a perspective of having served in Congress for ten years.

“In D.C. impeachment is an all-consuming obsession,” he said. “It’s ridiculous. The discussion of whether it will benefit the party or not; or how the Democratic nominee could benefit from impeachment. And what would it do to his (Trump’s) numbers? Nothing else is going on. When I was in D.C. there might be one vote a day on other issues. The Democrats are having internal meetings all the time.”

He added, “It’s all that’s happening. No taxes. All impeachment all the time. I think it will help Trump and hurt Biden. It certainly helps Trump fund-raise.”

He said “moderate Democrats” are caught in the middle between House Speaker Nancy Pelosi and progressive icon Alexandria Ocasio-Cortez (AOC). He compares it to “the first two years with the Russian collusion investigation, which turned out to be totally worthless.”

He compares this to feedback he gets back from his constituents here in California. “It’s not that big a deal. They know it’s not going to lead to removal,” he said.

Asked if he felt “betrayed” that former Republican colleagues Darrell Issa and Carl DeMaio have entered the race against him, Hunter said stoically, “No, it’s politics. These guys are politicians.”

Hunter was one of the very first converts to the Trump campaign in 2016 and he remains a staunch supporter of the president’s policies, including tariffs. “I think they are great,” he said. “They are not great for Wall Street but they are great for American manufacturing,” which he characterized as “the bedrock of the country.”

He described the competition between China and the U.S. as “a long game and they are doing it in an election cycle while China looks at things in terms of hundreds of years.”

In his district, the topic du jour is “transportation, transportation, transportation,” and he described Hwy 78 as “the worst road in the county,” however, he explained that although many federal funds come to California to be spent on things like roads, that the state and to a lesser degree the County, actually disburses the money and decides where it will go. He gets very little input on those decisions.

Asked if the rise of “ballot harvesting” in California concerns him, Hunter described the 2018 wipeout of Republicans in the state, and pointed out that of 53 seats, only seven are held by the GOP. He bragged that he was the two Republicans south of Los Angeles who kept his congressional seat and so thought it ironic that one of the former GOP congressmen (Issa) was challenging him.

“That tells the tale. Two Republicans who don’t want to run in their own districts are running against the only guy who won,” he said.

Asked if he worries over the use of so-called “ballot harvesting” in the upcoming election, Hunter said he is. He called it a result of California’s “motor-voter” process that automatically registers anyone who gets a driver’s license. Anyone can use ballot harvesting, he said, but Republicans are less likely to because Republicans are reluctant to give their ballots to  let someone else to take to the registrar of voters. “If you pay $30 an hour to someone to say, ‘I’m here to collect your ballot,’ you will get to people who haven’t voted in a long time,” he said.

By studying voter lists you can tell how many have voted and who hasn’t turned in their vote and go to those houses to collect ballots, he said. “In 2018 they bused in hundreds of people in and paid them well” to collect such ballots.

Asked how he differentiates himself from his GOP challengers, he said, “Look at my record. I’ve actually accomplished things. I have a relationship with the president.” He noted that he helped found the “Justice For Warriors” caucus in Congress with Rep. Louie Gohmert.

On the issue of national security, he said, “No one was worked harder than me. My dad literally built the border wall in San Diego—a wall that works.” As a congressman, he said, “I’m helping Trump to use the military to help build the border wall.”  It was his suggestion to train soldiers along the border without spending any actual funds for the wall.

On the issue of healthcare he offers traditional Republican solutions, such as allowing pooling of healthcare policies across all 50 states and purchasing them across state lines.

He took credit for preventing the Singaporean company Broadcom  from buying Qualcomm in 2018. Trump issued an order preventing the sale at his urging, he said. “You don’t want a foreign power to buy a high tech firm like that.” Speaking of the China/U.S. rivalry, he said, “They have to feed the machines and that’s hard to do. They do it by cheating Americans.” He would favor lifting tariffs if there was actual reciprocity between the two nations. “If theirs was zero and ours was zero, I’d say, ‘Let’s make a deal.’ ”

During the session two residents, Norma Rose Eckblad and Rangan Kasturi who live in the Escondido area brought to Hunter’s attention a proposed recycling plant: North County Environmental Resources Project that would be located in an unincorporated area of the County, but which they said would be bounded on three sides by the city of Escondido.

They said they fear the plant will produce dust, traffic and created a fire hazard by storing wood waste. They asked Duncan to look into it. He promised to contact the appropriate Supervisor’s office and bring up their concerns.

The roundtable lasted a bit more than an hour.