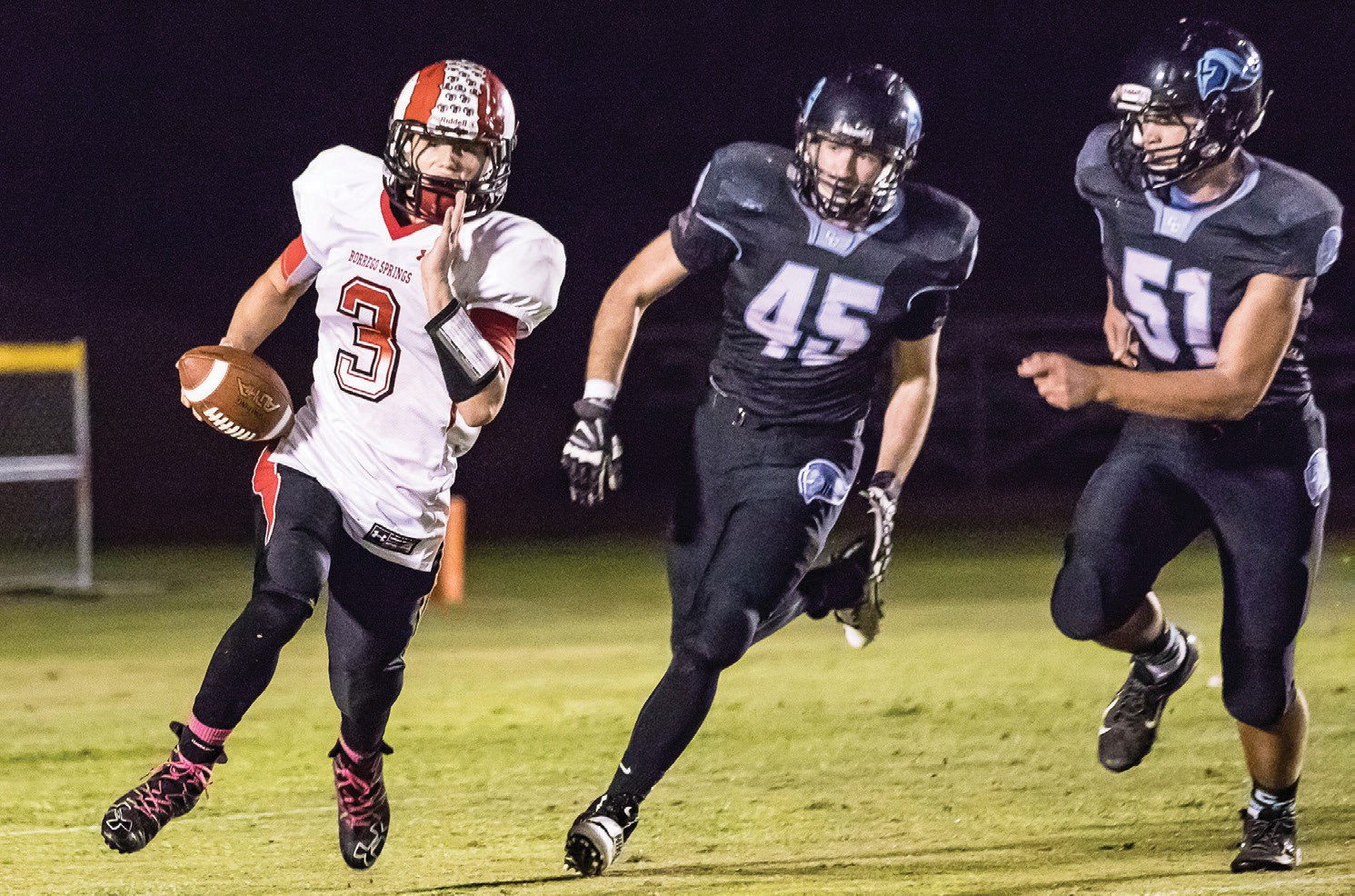 The Calvin Christian football team is right there, just one final step away from something quite significant. Clearly, history is beckoning.

Should it run the table and defeat Foothills Christian (El Cajon) in tomorrow night’s Division VI finals to be played at Mission Bay High School, then the Crusaders (9-0) will have created for themselves an undeniable place in prep folklore. For a victory over the streaking Knights will mean that Calvin not only completed an undefeated season but better still, will have captured a second straight CIF championship. You’ve got to go a ways to eclipse those two impressive achievements.

The Crusaders positioned themselves for a chance to win back-to-back titles when they shook off a sluggish start last Friday night before rolling to a dominant 51-0 semifinal triumph over visiting Borrego Springs (7-4). And give CC credit for being amazingly consistent in putting up the same number of points that they had rung up on the Rams in an earlier contest in late-September (51-6).

Offensively, it took the Crusaders a while to get things rolling but once they did, it was tantamount to a deluge. The hosts lit up the scoreboard in the second (29 points) and third quarters (22 points,) during which time they found the end zone on six straight possessions. With CC’s highly diversified attack operating at peak efficiency, the Rams were simply overwhelmed and had no answer as 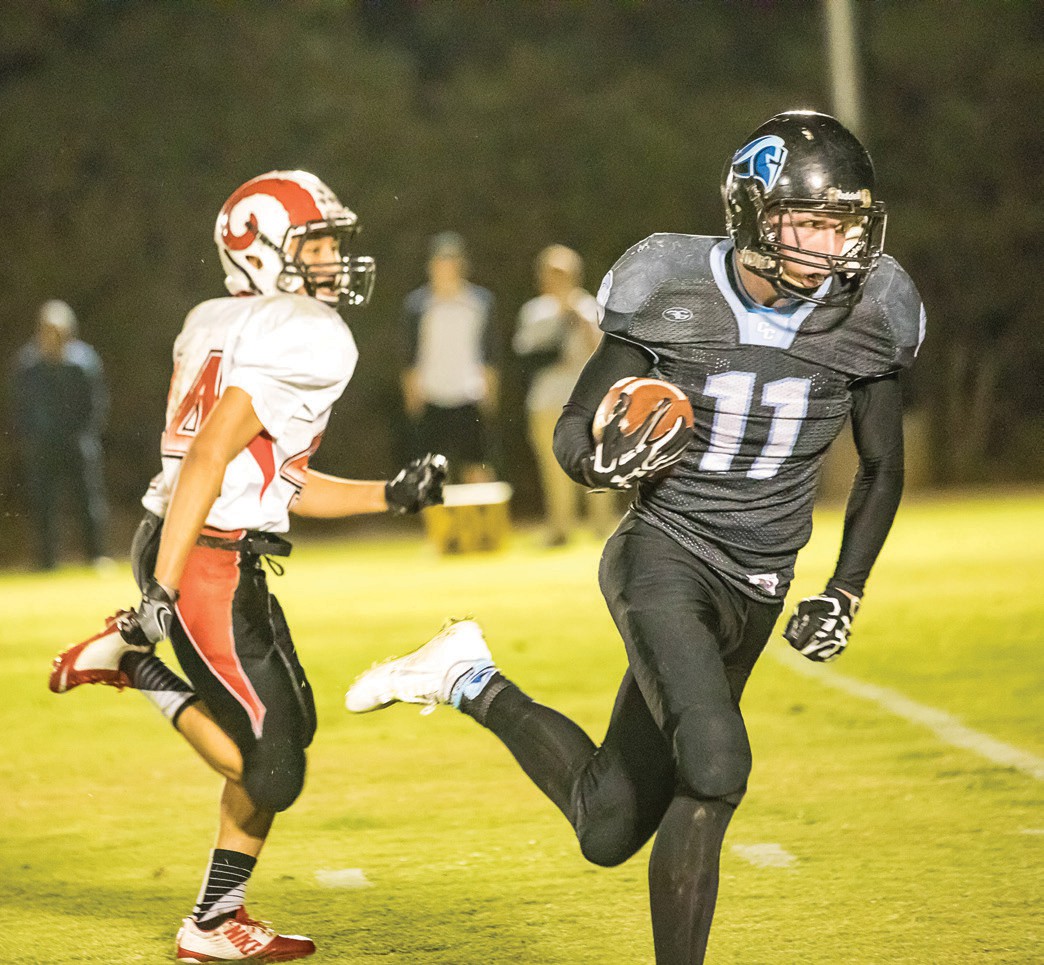 to how to stop the Crusader juggernaut.

The offensive show was paced by sizzling quarterback Matt Lafler who put his signature short- stroke passing motion to maximum use, throwing for four touchdown passes, three of which came from 35 yards and beyond. And hardly a one-trick pony, Lafler showcased his ample footwork with a 12-yard paydirt run that opened up the scoring.

But this was far from a one-man effort. The offensive line was outstanding, not only giving Lafler plenty of time to unload but also carving out huge holes that the vaunted CC running backs could continually exploit.

Speaking of which, the guys who toted the ball were their usual productive selves. The ever-elusive Daniel Esguerra led the way with 125 rushing yards and scored on a short run. Meanwhile, super soph Wes Salzman (102 yards) continued to build on his glossy resume with a 60-yard burst as well as a 43-yard grab, both of which resulted in six points.

Not to be outdone, receiver Jordan Thomsen, who has a propensity for getting loose, latched onto a couple of TD receptions and a two-point conversion. And Luke Bousma made his lone catch a big one, a picture perfect 47-yard link up with Lafler.

And though the offense with its prolific output took center stage, the defense also shined brightly in pitching the shutout. Lafler was often in the mix while registering nine total tackles. Lineman 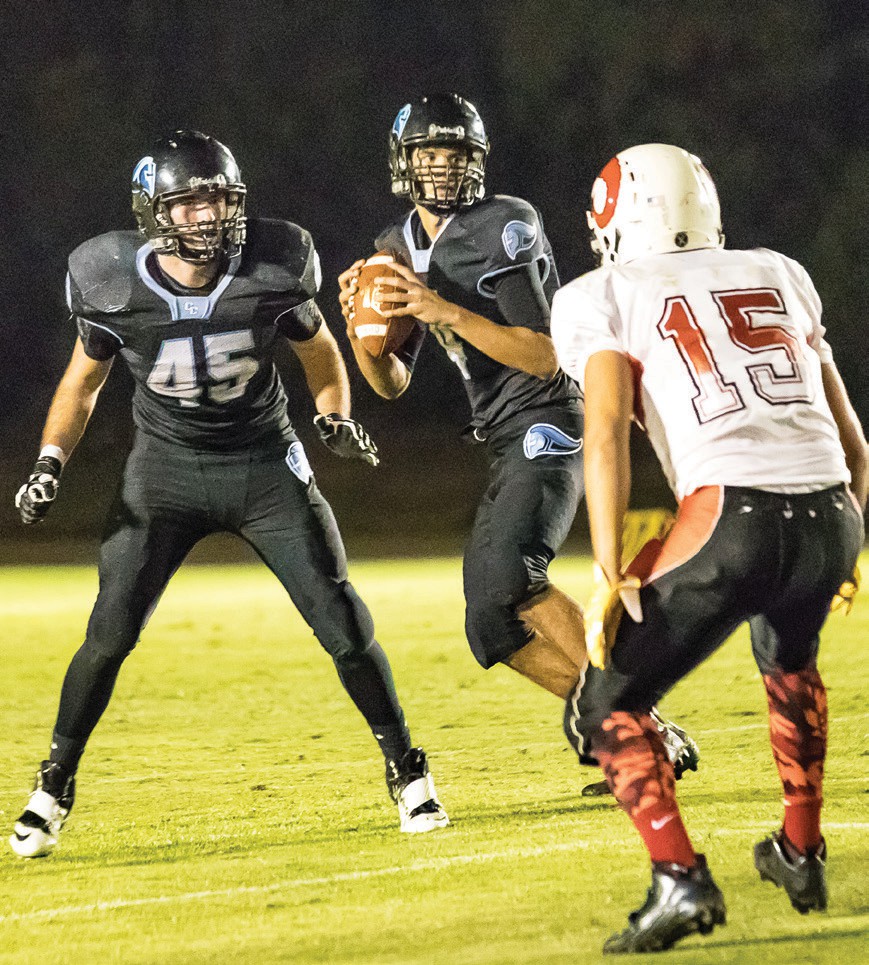 Well protected throughout, Calvin’s Matt Lafler threw for four scores on the night.

Mason Crouch was an absolute beast with 4.5 sacks. Defensive back Thomsen made a great read on an Andrew Morris toss and came away with a pick. And finally, Anthony Coseo, Nico Brower and Austin Dejong were quite disruptive at times with each getting credit for a sack-and-a-half.

Though it took Coach Randy Kreglow’s squad more than a quarter to get into the flow, once it did, there was no containing it. First, it was Lafler’s run to paydirt with 10:58 left in the second quarter. Then, in what seemed like rapid fire succession came the following; a safety, Bousma’s payoff grab, Salzman’s magnificent long-distance cutback dash which proceeded his TD reception, Esguerra’s

2-yard rush and finally, Thomsen’s two receptions that wound up in the end zone.

So in the space of just over 23 minutes, Calvin had made the football field resemble a pinball machine given the way it was racking up points. It was a scoring blitz that was a sight to behold.

When asked about CC’s offensive potency, though readily noting Lafler’s notable efforts through the air, Kreglow cites his running game as the main ingredient to success. “We are effective because we’re able to use a four-man rotation in the backfield,” he says. “As the game goes on and the defense begins to wear down, we can keep sending a fresh running back at them which is really to our 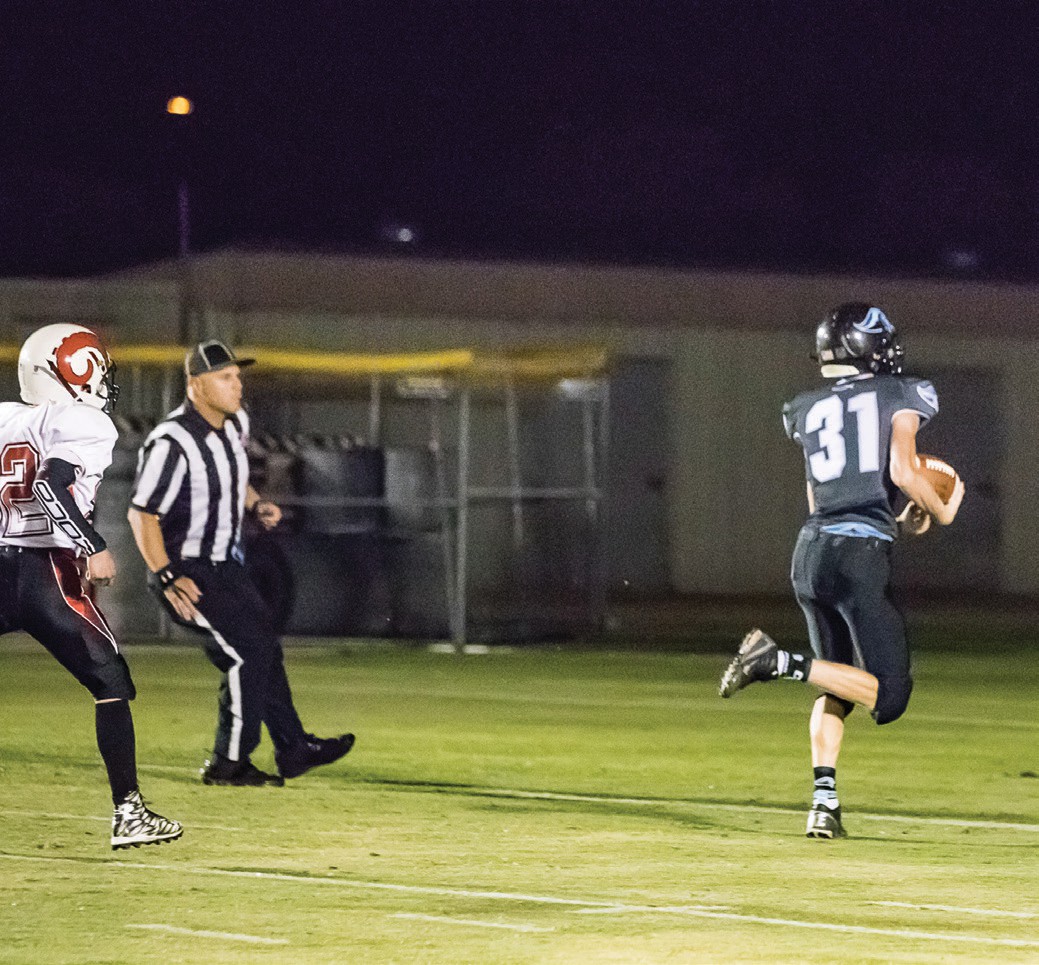 Receiver Luke Bousma shows his heels to the Ram defense while finishing off a 47-yard touchdown reception.

Though he noted Calvin’s sluggish start, Kreglow liked the way his team eventually kicked things into gear and began playing “much sharper.” The head coach then detailed how his current squad has been on a mission since the very first day of practice last August. “From the beginning, this group has made it their goal to go undefeated and win another CIF championship,” Kreglow explains. “And they’ve worked really hard in order to get to this point.”

Now, that ambitious quest requires just one more hurdle to overcome before it’s fully realized. Standing in the way is a Foothills Christian squad (10-1) that’s on its own mighty roll, having won nine in succession just like the Crusaders. Moreover, the Knights will be motivated by revenge and payback. You see, it was Calvin that handed FC its only blemish in a very competitive 38-24 game that took place in early September. “They’re a good team,” Kreglow readily indicates. “ We’re going to have to do a good job of preparing for them.”

So on Friday night, a whole lot will be on the line for the Crusaders when they tee it up versus FC. Among the items at stake will be a perfect season, another sought-after title, a place in the record books and perhaps of even more importance, a lasting legacy. One more step to take with only a single question yet to answer. Can they make it?