Crusaders on a mission to repeat as champs 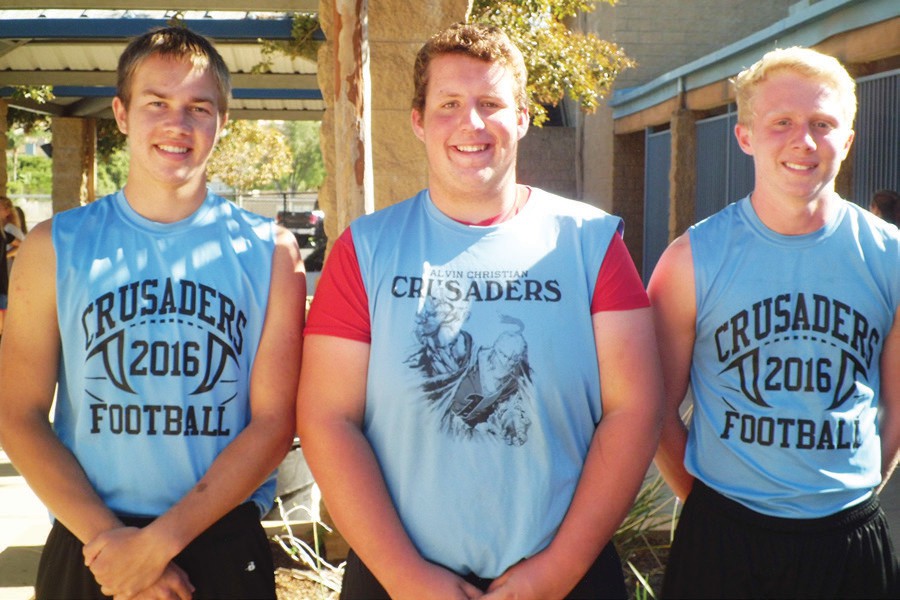 Inarguably, one of the toughest things to do in prep sports is to win a championship. What’s even harder is trying to defend one.

And that’s the position the Calvin Christian football team finds itself in as the 2016 season unfolds. After a dominating 68-8 win over The Rock in the Division 6 (Eight-Man) CIF title game of last year, the Crusaders were fully aware that when the current season commenced, they would be the ones with a huge target affixed firmly on their backs. Every team they play would be looking to enhance their status and reputation by being able to take down the reigning champs.

But instead of being unnerved or uneasy about being the hunted, the Crusaders’ mindset is to say to the opposition, “Hey, bring it on. We welcome the challenge.” This is a squad that relishes the chance to prove itself all over again. “These kids have high expectations,” says Randy Kreglow, now in his sixth year as head coach of CC. “They want to repeat and win it all once more. And they firmly believe they can do it.”

With a 26-player roster that has good class balance across the board, this is a squad with the experience, talent and potential to be special.

And based on what’s happened so far, the Crusaders figure to be a handful for any school they encounter. In their opener against Foothills Christian, CC parlayed a “lights out defense” (according to Kreglow) into a 38-24 conquest. A week later, after being tied with California Lutheran at 21 apiece, the Crusaders’ superior conditioning kicked in and the hosts impressively ran off and hid in an eventual 69-21 blowout. And just this past Friday, the offense continued to really percolate in a 61-30 pasting of St. Joseph Academy.

Before moving forward, a quick primer on the Eight-Man game. Where the difference between it and the traditional 11-Man version primarily shows up is on the defensive side where, because you’re competing with three less defenders, there is no free safety and man-on-man coverage is a virtual requirement. And since there is less backend help, more big plays and increased scoring can result.

And these Crusaders know plenty about producing points and lighting up the scoreboard. Their offense is potent and has enormous upside. And though they run a rather fundamental and basic scheme, their execution can be sublime, making them difficult to stop. Let’s take a closer look at the personnel that makes things go when CC possesses the ball.

The quarterback is three-year starter and the uber athletic Matt Lafler. The owner of a cannon arm (4 TD passes) and tough to bring down, Lafler is a versatile package who presents multiple problems for enemy defenses.

The running core is a deep and productive one. Through three games, the leading rusher has been Daniel Esguerra (306 yards, 4 TDs), a deft cutter who is uncanny in his ability to stay low and conceal himself behind blockers before popping free. Sophomore Wesley Salzman (303 yards, 5 TDs) is a rugged and fast ball carrier who’s capable of going into beast mode because of his willingness to take on as well as initiate contact.

Whenever the Crusaders need a thumper for those tough three or 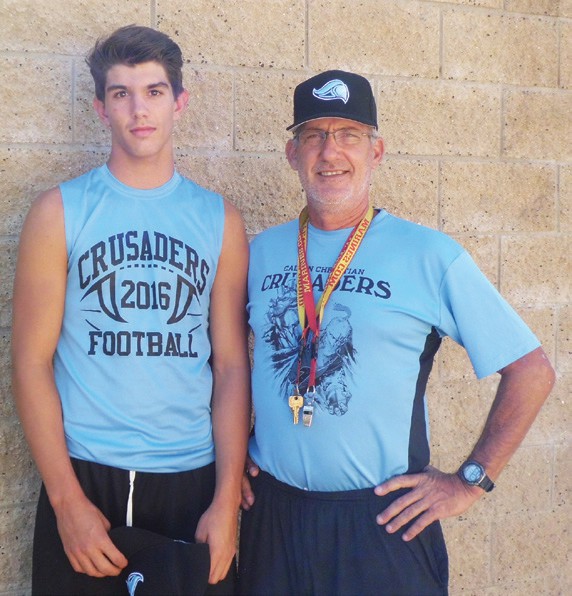 Coach Randy Kreglow has great belief in the capabilities of his versatile quarterback Matt Lafler.

four yards inside, dependable senior fullback Mason Crouch (269 yards, 5 TDs), who also has a real nose for the goal line, figures to get the call. And young Evan Senti is another runner that has shown real promise and continues to improve on a weekly basis.

Though up to now it’s the running game that has been the overwhelming catalyst for CC’s offensive success, the Crusaders have a strong receiver in Jordan Thomsen. The possessor of good hands and notable speed, Thomsen (7 receptions, 147 yards, 2 TDs) is a natural athlete who aggressively goes up for the football.

The Crusader line upfront is a genuine team strength and features a trio of stout performers. Austin Dejong is an assertive lineman capable of being a bulldozer who can dominate. Anthony Coseo is consistency personified and is considered to be the line’s anchor. Rapidly developing Nico Brower is a strong kid who is clearly on the come.

Though the offense can be stellar, the defense has also established its own identity based on quality play. CC’s base defensive alignment is the 3-3-2 although they’ll show some variety by periodically switching into a 2-4-2. Because of the team’s limited numbers, there are plenty of two-way performers and many of the mainstays on offense are also indispensable parts of the defense as well.

Down in the trenches, nose tackle Dejong utilizes his size and strength to set up shop and become almost unmovable. Meanwhile, Brower is a defensive end who’s hard to block, doesn’t allow anyone to get to the perimeter and rarely misses a tackle.

At outside linebacker, it is the active Lafler who shines. A true disruptive force, Lafler is a player who relishes the physical side of the game and is every bit as dynamic at delivering hits as he is at throwing the ball. Ably complementing Lafler is the skilled Coseo, who reads and fills well and brings an aggressive mentality to the task at hand.

Back deep, San Pasqual transfer Bryce Lovisa is a speedy cornerback who can move, cover and isn’t hesitant to come up and lay the lumber on opposing runners. Thomsen is another talented DB who has keen anticipation as evidenced by his three interceptions.

The kicking game, when needed, can definitely contribute. Lovisa is a punter whose placement is notable while Esguerra, the owner of a prodigious and accurate leg, has the wherewithal to drill field goals from 50 yards and beyond.

As for the return game, Thomsen is the player to watch given his speed, elusiveness and willingness to run with abandon.

The reason that Kreglow has such an unshakeable belief in his team is because this is an exceedingly hard working group, willing to pay whatever price necessary to remain on top. But though the Crusaders push to the max, Kreglow makes sure to find creative ways of having fun on the field. It’s never becomes drudgery or monotony for CC. As Kreglow says, “You’ve got to enjoy what you’re doing, no matter what it is.”

Well, the Crusaders certainly enjoyed what went on last season and what has taken place thus far in 2016. And if they should be able to win another championship, then their enjoyment quotient should reach a whole new level.