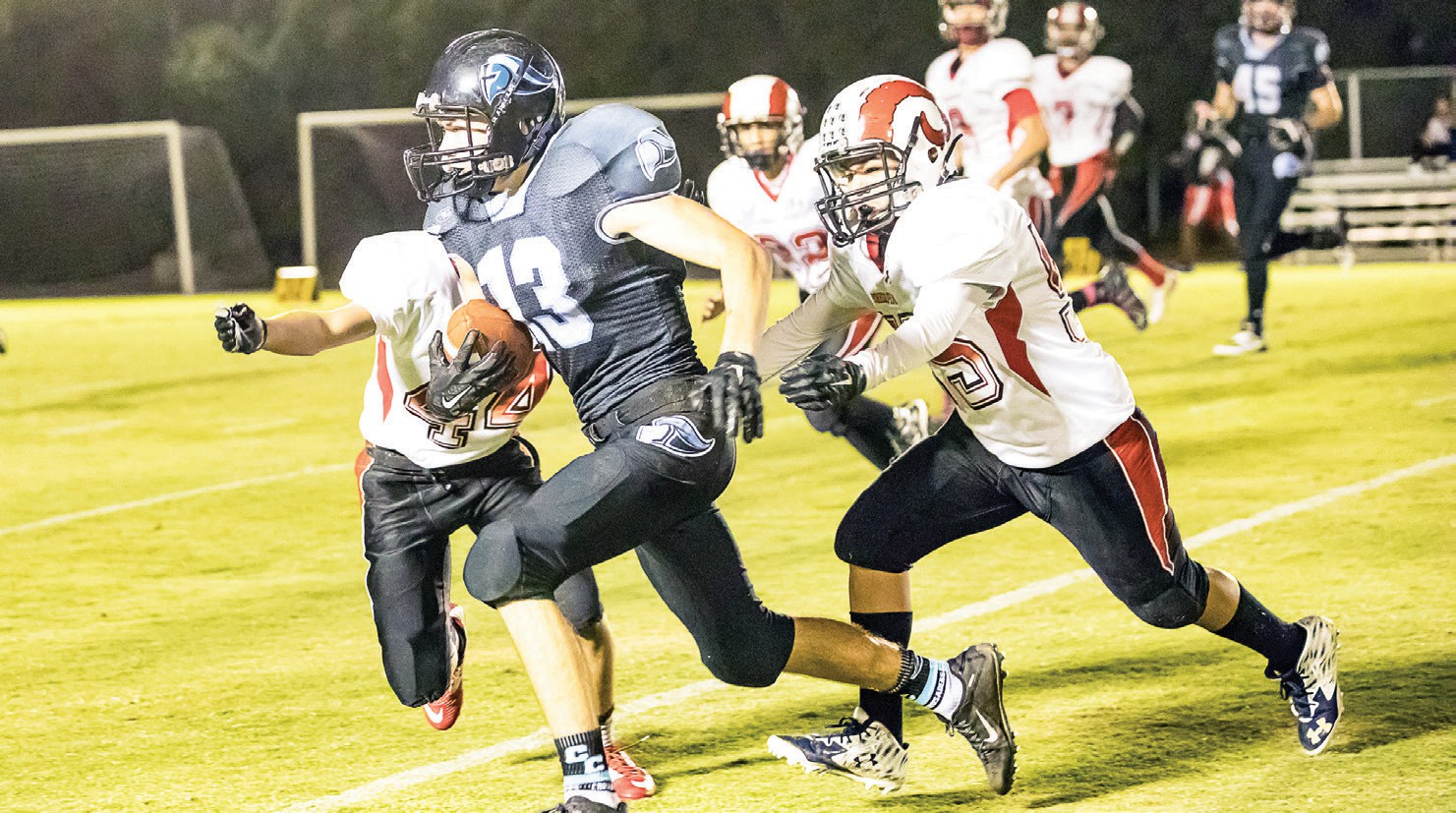 Calvin Christian’s terrific 2016 season came tantalizingly close to being one for the record books. But unfortunately, close doesn’t quite get it done and, as a result, the Crusaders saw their cherished goals for an undefeated campaign and back-to-back CIF championships elude them.

On Friday night in a remarkable Division VI title contest that took place at Mission Bay High School and featured eight lead changes, Foothills Christian seized a 12-point margin early in the fourth quarter and then grimly staved off the Crusaders 44-38. The loss brought to an end Calvin’s perfect record (9-1) and also snapped the Crusaders 12-game winning streak that had stretched out over two seasons.

Meanwhile, the streaking Knights (11- 1) are in the midst of a ten-game roll and more than made up for a 38-24 setback suffered at the hands of the Crusaders in early September. Based on its impressive performance, Foothills Christian has clearly stepped up its game and grown in confidence since that previous encounter.

Elusive Knight running back Caleb Tarver proved to be the game’s difference maker as he tallied on four rushing touchdowns, two of which were of the long-distance variety, coming from 50 and 54 yards out.

The Crusaders also had their own standout in quarterback/linebacker Matt Lafler who put on a dazzling show, hitting on four scoring passes as well as bringing back an interception return for yet another tally.

While Lafler was certainly the ringleader for the Crusaders, he nonetheless got plenty of able assistance from other notable teammates. In the final game of his Calvin career, wideout Jordan Thomsen was huge, snaring spectacular payoff pitches of 64 and 70 yards in addition to piling up 171 yards on kickoff returns. Bryce Lovisa was also a prime target for Lafler and the talented junior receiver hauled in a pair of clutch paydirt strikes. Another big contributor was quick running back Daniel Esguerra who scored on a 72-yard

Quarterback Matt Lafler (4) and his teammates enjoyed a splendid season despite the 44-38 loss in the Division VI title game. Photo by Lenny Kerbs

dash and ended up having amassed 119 yards on the ground.

Moreover, though the CC defense was obviously pierced at times, it nonetheless had some real contributors. Defensive back Lovisa was a presence with a team-leading 13 tackles. In addition to his pick and a couple of tackles for loss, linebacker Lafler was a force while getting in on 12 stops. Defenders Wes Salzman and senior Mason Crouch were conspicuous while registering 10 tackles apiece while down lineman Anthony Coseo did some great work upfront with three tackles for loss.

This was game in which the Crusaders certainly had their chances, taking the lead on four separate occasions at 12-8, 18-16, 26-22 and 32-30 but each and every time the resilient Knights responded and came back to surge to the front.

Once FC established a 38-32 advantage late in the third quarter, it would never again relinquish the lead. When Lafler connected on his second scoring pitch to Lovisa, the Crusaders got to within 44-38 with plenty of time left but they just couldn’t produce what would have been the equalizing score.

Ultimately, the outcome of this contest was decided by each team’s success rate at the two-point conversion, where Foothills Christian was able to make good on three of six attempts while, tellingly, the Crusaders came up empty on four of their five tries.

And so a splendid and most noteworthy year culminated with just one drawback, an unsatisfying finish that denied the Crusaders a second straight CIF crown. But that disappointing ending shouldn’t detract from a season that should and will be remembered with pride and a true sense of accomplishment.

What’s more, Calvin will be returning some dynamite talent next year that should facilitate another championship run. Back will be gifted players like Lafler, Salzman, Esguerra, Lovisa, Coseo and Nico Brower. That’s more than enough firepower to ensure the fact that the Crusaders will remain among the Division VI elite in 2017.