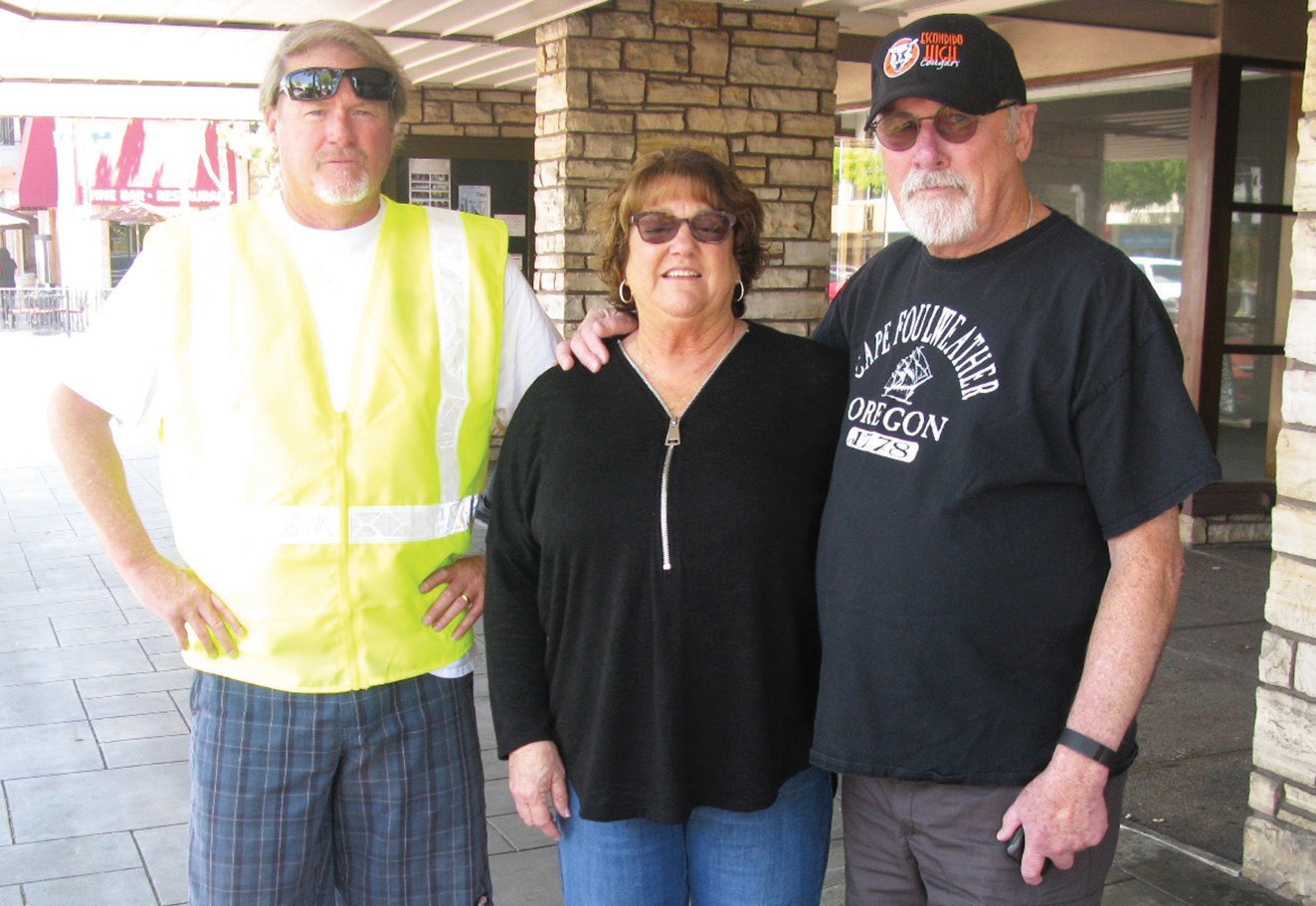 Waldron carried two buckets containing the bright yellow signs and ties and we talked as he did his work. Cruisin’ Grand is in its 17th Year and Waldron has been in every one.

We were stopped during his Friday routine several times by friends and acquaintances.

One dude just walked up and asked, “Hi Steve, What size do you wear? Do you wear an XL or an XL- tall?”

Dude: “Thank you. I’m going to do something really cool.”

The guy left. “Dude owns Judy’s Embroidery (201 Grand Ave.) one of these businesses around here,” he said.

Later on we spotted a vintage Ford truck, beautifully restored, tooling east on Grand. I asked if it was a ’56. Waldron said I was partly right and that Ford trucks were the same between ’53 and ’56, except for the grille on the front. He couldn’t see the grille.

At one point Waldron said, “I grew up in the hot rod world” and that he and his father rebuilt a ’39 Ford “from the ground up.”

“And I still have that vehicle. I’ll never sell that one. I pray to God I’ll give it to my son someday.”

He talked about why the event is so popular, attracting up to 5,000 people to the downtown event. “It’s just part of Americana, old cars. And I think that’s why people, not even car people, generally come down here because it’s become this happening that the community got behind, y’know. It’s a real family event.”

I asked him about how the event got started in April 2000.

“I had this crazy idea. We were doing something called Run for the Arts at the park and I went to the Downtown Business Association and they weren’t involved in old cars in any way so they were like, well, uh, all right … (but) they were open to it. I said we’ll get some sponsors, we’ll bring this cruise downtown.

“I told them we were going to start the thing in April. We got our ducks in a row and we didn’t close any streets off.”

He continued, “So I called everyone I knew and said, ‘Bring it out, come on out.’ And it was a pretty nice day, a little cooler, y’know April. So we had about fifty or sixty cars show up and we did the awards at the old theater up there, the Ritz.

“We hired a DJ that’s still with us, he was playing music. At the end we gave out awards. We only had just a little money so we gave them a beer mug with Cruisin’ Grand etched into it.”

“We never looked back after that,” Waldron said. “The event grew and it made more and more money and I was able to close Broadway off, then Juniper, Kalmia, Maple. And thus the event has kept going and we have three live bands.

“Over the years we’ve established this great reputation. We’ve been on hot rod TV shows, you see weather people out here doing the weather report at this big event in Escondido. It’s kinda neat. Our culture, the car culture, is very well known.”

Waldron recalls something that really impressed him. “My dad was in a store in Juneau, Alaska, a couple years ago. He was wearing a Cruisin’ Grand hat. An employee said, ‘I love Cruisin’ Grand. When I get time off I go down to San Diego and I always go to Cruisin’ Grand.’

“And my dad thought that was the coolest thing. There he is in Alaska and somebody’s talking about Cruisin’ Grand.”

One response to “Cruisin’ with Steve Waldron”