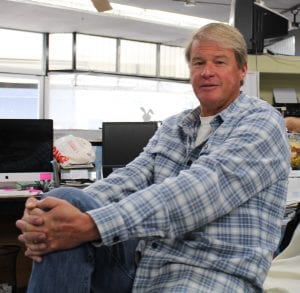 “You’d think it would get easier after nineteen years, but it doesn’t seem to,” says Steve Waldron relaxing in his Hi-End T’s print shop a couple of weeks out from the frantic energy of the return of Cruisin’ Grand—whose first night is April 6.

This will be the 19th year for Escondido Cruisin’ Grand and founder and champion cat herder Steve Waldron couldn’t be more excited about the event considered the largest celebration of American muscle car “cruisin’” culture in the United States. “It’s the nineteenth year of Hot Rod bliss!” he exclaims with a sly understated grin.

Cruisin’ Grand will return April 6, 5 p.m.–9 p.m. (although the streets are closed off by 4 p.m.) with the side streets blocked between Ivy and Orange, although the seven blocks of fun happen between Juniper and Maple.

The first night will be the “Gasser and Willys Night.” Gassers are a type of car that became popular for drag racing back in the 1950’s when hot-rodders learned how to mix fuels with high octane—including the potentially explosive nitro mixes.

The “gassers” had a lifted nose that transferred the weight to the rear of the car for increased traction. This hot rod originated and ruled on the dragstrips of the U.S. from the late 1950s until the early 1970s. Before Pro Stock, A/Gas cars were the fastest stock cars.

Another type of car from this era was the “Funny” cars—Comets with converted wheel bases. Funny cars are typified by tilt-up auto bodies.

The Willys, of course, are the Willys Americar made famous before and after World War II. The Willys company designed the Jeep that U.S. G.I.’s drove around every theater of war.

“Willys were the cheap business men’s car in the 1940s. When soldiers returned from World War II they were able to afford them and build them up to be drag racers,” says Waldron. “Willys designed the Jeep but couldn’t mass produce it, so Ford produced it. Chrysler did the half-tracks. Willys couldn’t survive as a company after World War II.”

But they survive today in the minds and hearts of their fans who will come out to see them once more as the center of attention on opening night of Cruisin’ Grand.

“We will be opening with eight hundred cars from the Del Mar Good Guys, who will be heading our way from Del Mar on Friday afternoon along Via De La Valle. “Early iron!” exclaims Waldron. “It’s awesome!”

There will be three bands on opening night, at Maple, Kalmia and the Gazebo at Juniper and a DJ at Broadway. A hula-hoop contest will happen adjacent to the DJ around 6:30 p.m.

“Hop up night” will be April 27, when you will see the younger generation of car enthusiasts with an historical-looking hot rods built out of junk yard parts.

“It’s a fascinating history of cars and how they have changed over the years,” muses Waldron. That evolution of the Ford will be highlighted at the June 22 themed Friday. Visitors will see the evolution of the car from Model T’s with kerosene headlamps to the Model A to the last Flathead Ford in 1953—with the cars making their appearance courtesy of three car clubs.

Another fun theme night will be the Packard & Pierce Arrow night on June 1.

August 3 will be the British and German car night. “It was pretty successful last year,” says Waldron. “We had some rare Porsches and a British MG police car!”

Perhaps the biggest and most emotional of the theme nights will be the fire truck night, which will be September 7 this year and will feature a steam powered fire engine from the 1800s.

“We’re trying to find the reclaimed water so that we can spray the kids that night with the pumper,” says Waldron. For that same night they are working to get one of the fire engines that was crushed during 9-11 in New York City. “We will also have a piece of the World Trade Center that will have a plaque with all of the names of firefighters who fell on that day.”

The parade will also feature “Betsy,” Escondido’s first fire engine. It has a permanent home at the Escondido Fire & Police Headquarters, as well as one of Escondido’s earliest “cruisers,” a 1948 Harley Davidson police motorcycle.

“You’d think it would get easier after nineteen years, but it doesn’t seem to,” says Waldron. For a while he worried that the people at the heart of “Cruisin’” were going to die out. “The people into muscle cars and hot rods aren’t getting any younger. We lose a few every year. A lot of these guys and gals grew up with this culture.”

But he recently began to get encouragement. “We have young people who are starting to attend the old car shows. The problem is that cars are becoming so expensive, but you are starting to see kids looking at older Ford and Chevy pickup trucks.”

Auto parts companies such as O’Reilly are starting to see young kids souping up their granddad’s cars that have gatherd dust in the garage for 30 years. “A couple of years ago I was getting nervous but I’m feeling better that the millennials are starting to do it,” says Waldron.

Recently he attended the Grand National Show in Pomona. “These guys had lines of kids going to get their autographs. I was thrilled to see that.”

As for this year’s event? “It’s going to be huge!” he says. “It’s going to be a blast. Our openings and our closings are blasts.” He KNOWS that the locals are into it. “I was at my son’s history project a couple of weeks ago and all the parents wanted to talk about was Cruisin’ Grand!”

He is proud that people plan their vacations to attend. It’s not unusual to see visitors from all over the world. One couple heard about Cruisin’ Grand from old car aficionados in Australia. But it’s just as likely they saw it on the Cruisin’ Grand website (cruisingrand.com) which is now getting about 1,00,000 hits each year.  Although it’s hard to get exact figures for a free event where no one does body counts. “They eat in our restaurants and shop in our stores and get an Escondido experience,” he says.

“We are the last real cruisin’ event. We’re twenty-six weeks and we come in with a huge opening and we end with Nitro Nite.” Which is, in case you have missed it, a night of extremely loud NOISE.

As usual, Cruisin’ Grand will get its share of coverage from television and national magazines. Almost every year the Discovery Channel sends out crews. “Last year we had the “Wheeler Dealers” from Velocity TV out here,” recalls Waldron.

If you look on cruisingrand.com right now you won’t see much. But in a few days, they will start posting the information for all 26 weeks. “We don’t post it until it’s ‘in stone,” says Waldron. “That way people can’t come over and demand that we change something.”

That kind of clever strategy must have evolved over time. So maybe things ARE getting a little easier for Steve Waldron and Cruisin’ Grand after all.