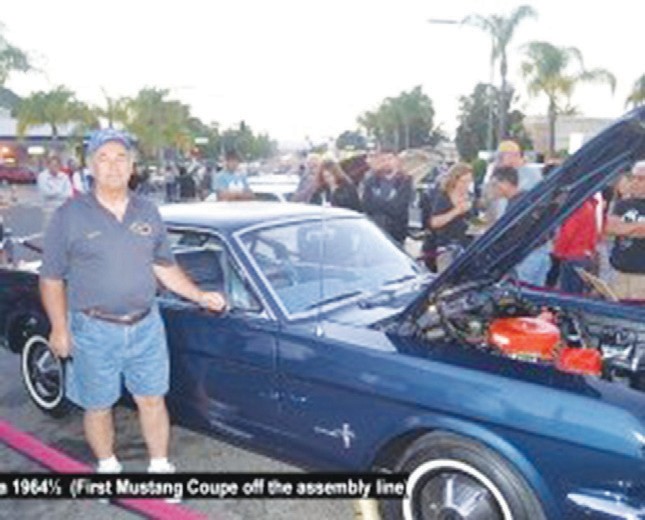 Celebrate the days, “when chrome gleamed and fenders had style!”

“We are sixteen this year. Sweet sixteen,” declared founder Steve Waldron. The Times Advocate dropped in on Waldron at his Top End Tees shop on Grand. He looked relaxed and sported a little goatee.

The 27-week event typically attracts 8,000 people per night, although some special nights, such as Nitro Night, when the festival finishes off with a loud roar, has been known to attract about 30,000. A total of 250,000 are expected for the entire season.

The first Friday night of this 27 week celebration of a uniquely American art form—that of the automobile— is April 3, 5-9 p.m., although the streets (North Juniper, Kalmia, Broadway and Maple) will be shut off by 4 p.m. Grand will remain open for cruising. The first night is “Lone Wolf Night” which is set aside for cars that are not part of a club, although everyone is welcome. There will be music by three bands on Juniper Street, Maple Street Plaza and Kalmia & Grand. There will be hula-hoop contests, 1950s nostalgia and as many as 600 cars.

April 10 will be Willys Night. From 40-50 examples of this classic

Willy’s Americar from the manufacturer— Willys Overland Motors, which designed the first Jeep for World War II—will be brought to Escondido by the Willys Club of America. The Willys Americar was manufactured from 1937-1942.

April 27 will be Orphan Car Night, featuring car manufacturers no longer in business, such as Mercury, Studebaker, Plymouth and AMC.

Waldron talked about some of the new things coming this year to the festival. “Last year we had the very first Ford Mustang to roll off the assembly line,” he said. “This year we are going to have twenty-five real AC Cobras. The Cobras are part of a tour club that will be making a stop in Escondido on April 17.” These cars, which were manufactured from 1964– 67, are worth between $600,000 and $1 million apiece, says Waldron. 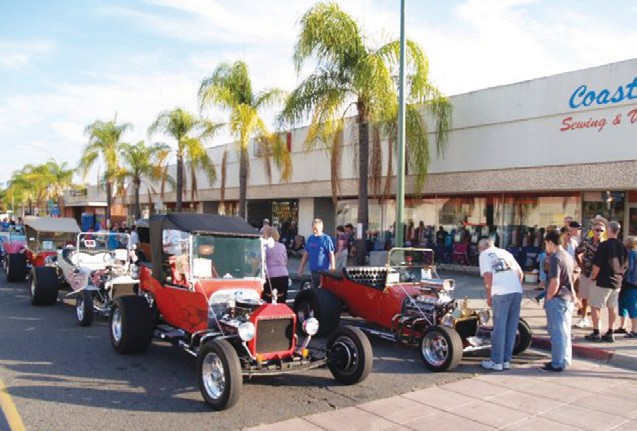 At those values, presumably the owners won’t be straying too far from their beauties.

He added, “This is the largest display of AC Cobras ever. Here you will get to see cars that normally sit in museums or in private collections.”

On August 7-September 7 Cruisin’ Grand will host the “IMMORTALIZED: Together Forever: Hot Rods, Pinups, and Body Art.” This is the 3rd annual Immortalized exhibit. It will include live music on the street, Stone Beer, and an art show and pinup contest juried by artist Natalia Fabia. All works start at $100 to benefit Palomar College Scholarships.

September 11 they will host the National T-Buckets tour. T-Buckets are Model T’s that have been transformed into hot rods. They were America’s first hot rods. “The T-Buckets just happen to be coming from a national tour of the U.S. and Canada.

This event will coincide with the annual Fire Truck parade, and because of the date when it occurs will be a very emotional and patriotic moment. You’ll find the T-Buckets parked on Maple Street for that event and the 30 or so fire engines will be parading down Broadway.

Last year the Discovery Channel came out and filmed the hot rod event at Cruisin’ Grand. “They had such a response that we have been told they are going to come out and film rods on Grand, which is exciting,” said Waldron. This is tentative, he added.

To celebrate the 60th anniversary of the 1955 Chevy 265 V8, the first overhead value Chevrolet V8 to go into the production, Waldron hopes to have some examples of that car on display brought by the Heartbeat car club.

Waldron talked about his fascination with classic cars. “I was raised at Southern California drag strips and raceways. It got into my blood. Cars are such a part of the great history of this country. The people involved with these shows are so good and so giving and great to be around. It’s a pleasure to be around them,” he said. “This event is not possible without the great support of our many sponsors.”

The Times Advocate will bring you regular updates of the festival in each issue, but you can also find updates by visiting cruisingrand.com