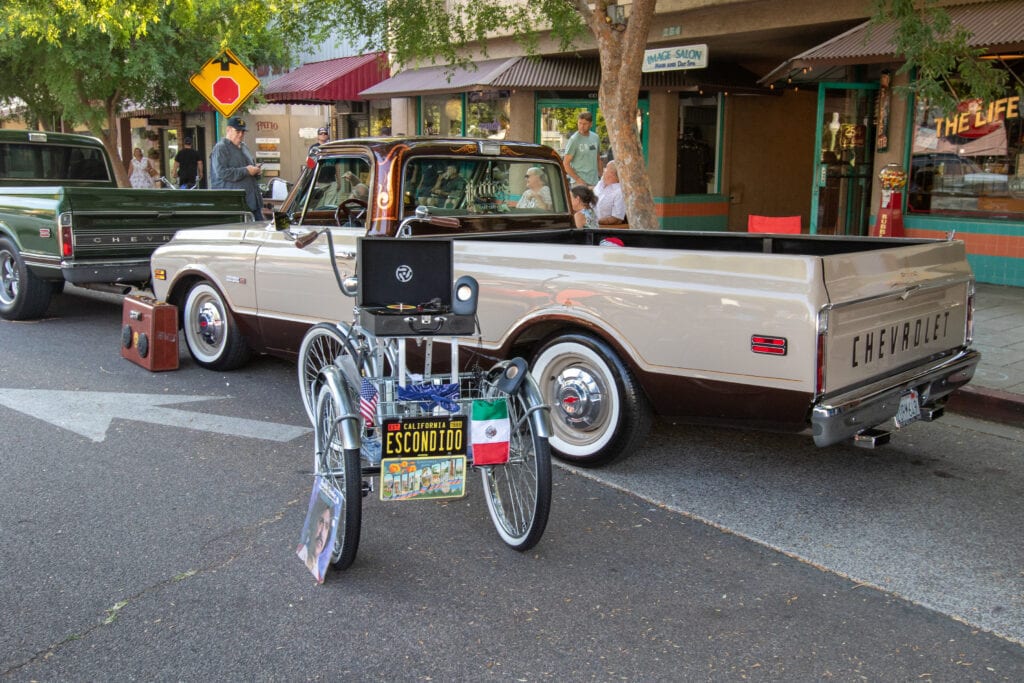 Friday night after much anticipation thousands took to the streets in a peaceful celebration of the enduring romance of the muscle car—and freedom after more than a year of restrictions. Estimates of attendance was about 10,000 during the course of the evening.  Cruisin’ Grand was back!

David Zumaya of My San Diego North County strolled through the multitudes, doing video interviews, when he caught up with Scott Mccaw, regional manager of O’Reilly Auto Parts, which has been a title sponsor of Cruisin’ Grand from the beginning.

“Well it’s been over a year since we had Cruisin’ Grand out here it in Escondido and as you can tell that this is one of the busiest nights we’ve ever seen,” said Mccaw.

Asked what he thought about the streets being closed off, Mccaw observed, “Well, it’s only temporary, for the first few weeks. It’s cool to walk around but on the other hand that is not Cruisin’, right?”

What makes him sponsor Cruisin’ Grand every year? “This out here is our customer base,” said Mccaw. “We have so many customers out here. We’ve done it for twenty-five years now. I see customers that I recognized form Murrieta from Hawaii from Oklahoma. I ran into a guy from Vista just a while ago.”

He called the return, “amazing!” and noted that he had just handed out a trophy to a man who built his car “from the ground up, on his back in his garage over the course of four years. He bought it as a salvage yard wreck and now you look at it!”

He reflected on the “kinship” that has developed between lovers of classic cars, especially those who restore them themselves. He recalled the 1955 Chevy he had in his garage when he was a high school junior in the 1970s. “It was gunboat gray with black rims.” He met someone at the show who had the same kind of car, but still has it. “He kept his first car and he has a sense of love and pride for that car.” Speaking to those who might be thinking about visiting Cruisin’ Grand Mccaw said, “If you are over the age of 50 or 60 or whatever you’re going to be able to relive your youth and hang out with good people.”

He invited people to come over to the O’Reilly Blues tent, “where we got a pachinko game of fortune. Drop a washer down and get to win lots of cool swag. That’s something you don’t see every day!”

Zumaya also spoke with Roscoe Tanner, president of Heartbeat Classics of North San Diego County, who declared, “Cruisin’ Grand is back, baby!” Asked to describe what kind of cars his club has, he said, “We have every kind of car. We have got cars on both sides of the street here. We have Fords, we have Dodges, we have Chevys.”

Tanner explained, “The Heartbeat Classics is generally considered a Chevy club but we are not a Chevy club. We’re open to everything. To be in our club you don’t even have to have a car; you just have to appreciate the hobby.”

Tanner added, “We really missed Cruisin’ Grand. We’re here every Friday on Kalmia south of Grand. We do a show up at Bates Nut Farm the last Sunday of every April called the Heartbeat Happening.”

Their first big show since COVID was held April 25 at Bates with 339 cars and 19 semies. “It was the biggest show we’ve ever had,” said Tanner.

Things were heartbreaking for the Heartbeat Classics club this last year. “We suffered. We did the best we could,” said Tanner. “We wanted some personal cruises and we still had outdoor meetings.” Heartbeat Classics meets the third Thursday of every month at Mike’s BBQ [1356 West Valley Parkway]. “Of course, with COVID we couldn’t do that. So after we were locked down for a while we started opening up again. We met up in the parking lot at Restaurant Row and did the social distancing and everything. We just had to get together.”

Club members were excited to hear that Crusin’ Grand was returning. “Steve Waldron [founder of Cruisin’ Grand] called me and told me about it and I said ‘We will be there and here we are in force! We got seventeen cars here tonight.”

The club itself has 65 members. “We have people that have three or four cars, so I couldn’t really give you a number of how many cars but I’d say at least 40 cars,” said Tanner.

He added, “It’s like it’s back to life again, normalcy again.” Tanner noted that his car is named after his late mother, who used to be at the same corner every Friday night: Kalmia and Grand. “My mom was known as Cruisin’ Grand’s dancing grandma!” Her name, he said, was Easy Allie. “You see I have window stickers on the back of my car my car as memorial to my mom. She looked forward to Cruisin’ Grand and we went to Charlie’s all the time.”

Zumaya asked Tanner about his new engine. “I got a  ZZ 450 four 700R4 transmission Moser 12 Volt pazi 411 with what they call the C clip eliminators. So basically everything in here is racing but I don’t race.” He calls the car Easy Allie. 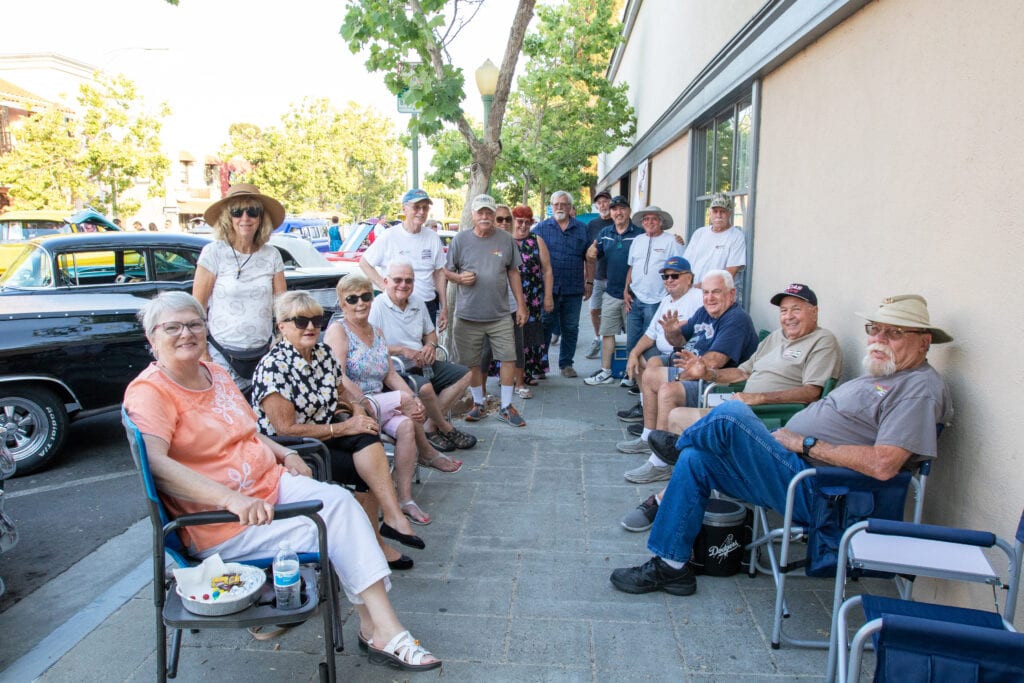 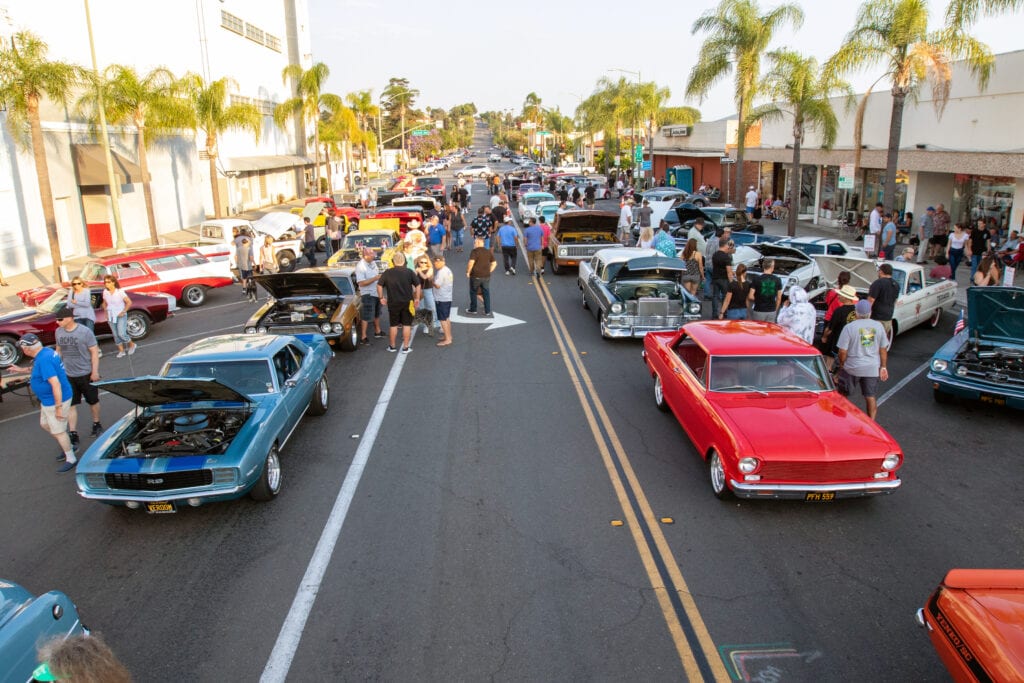 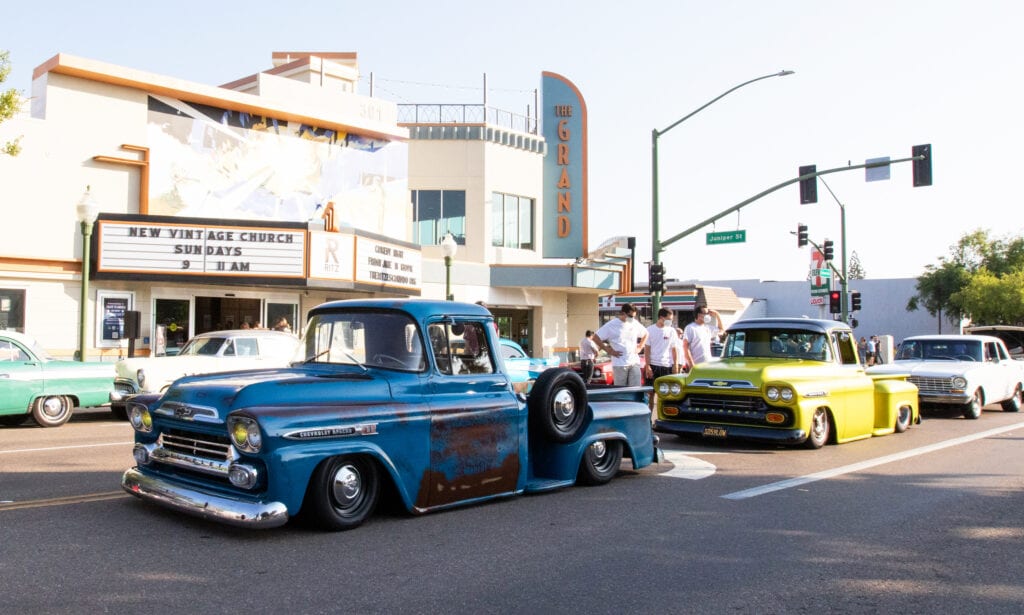 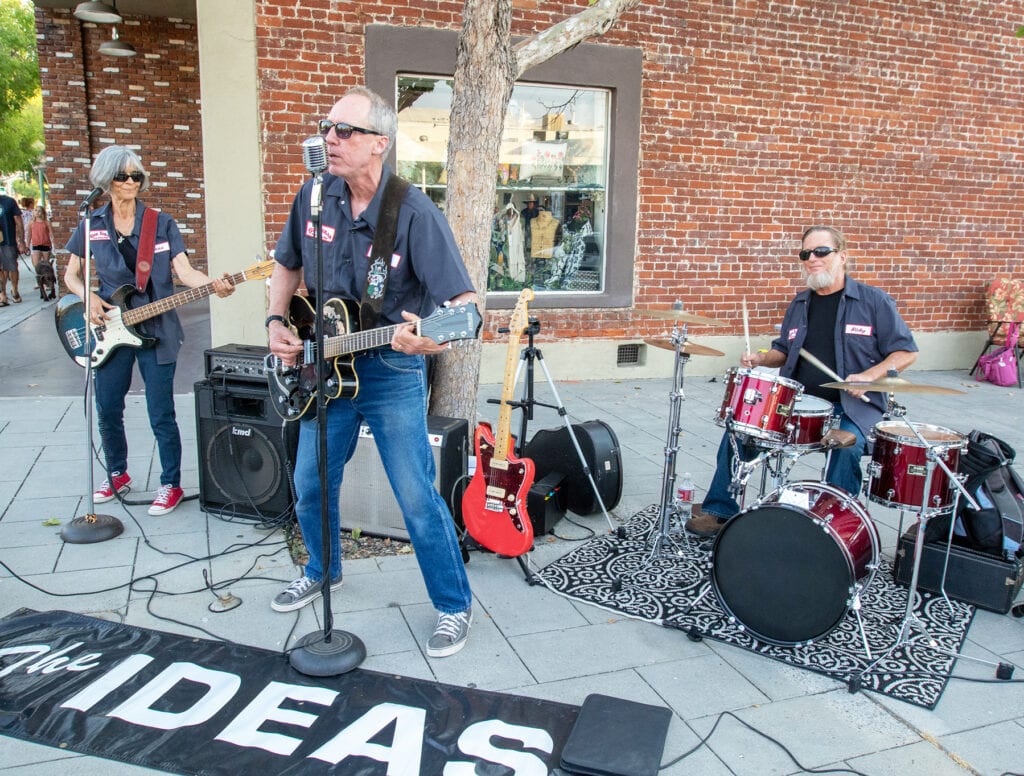 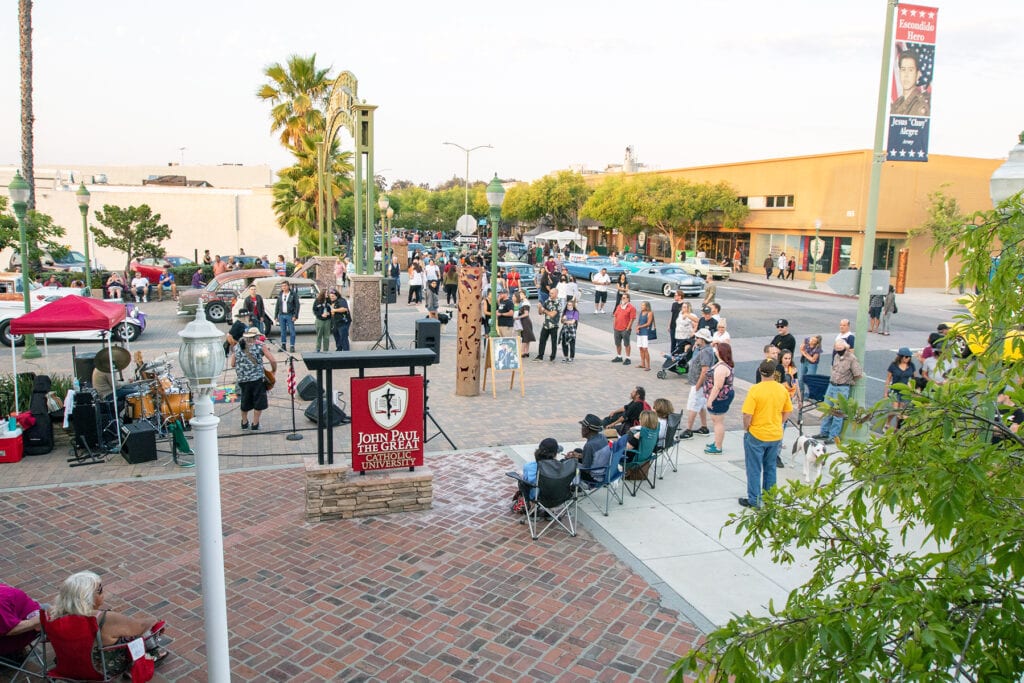 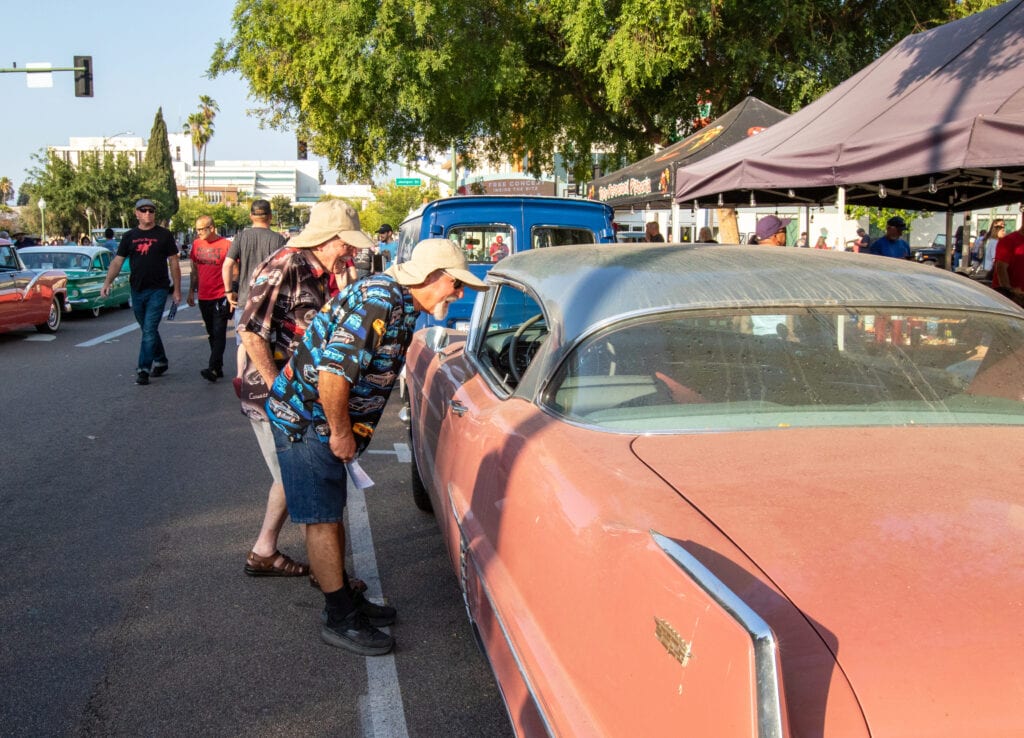 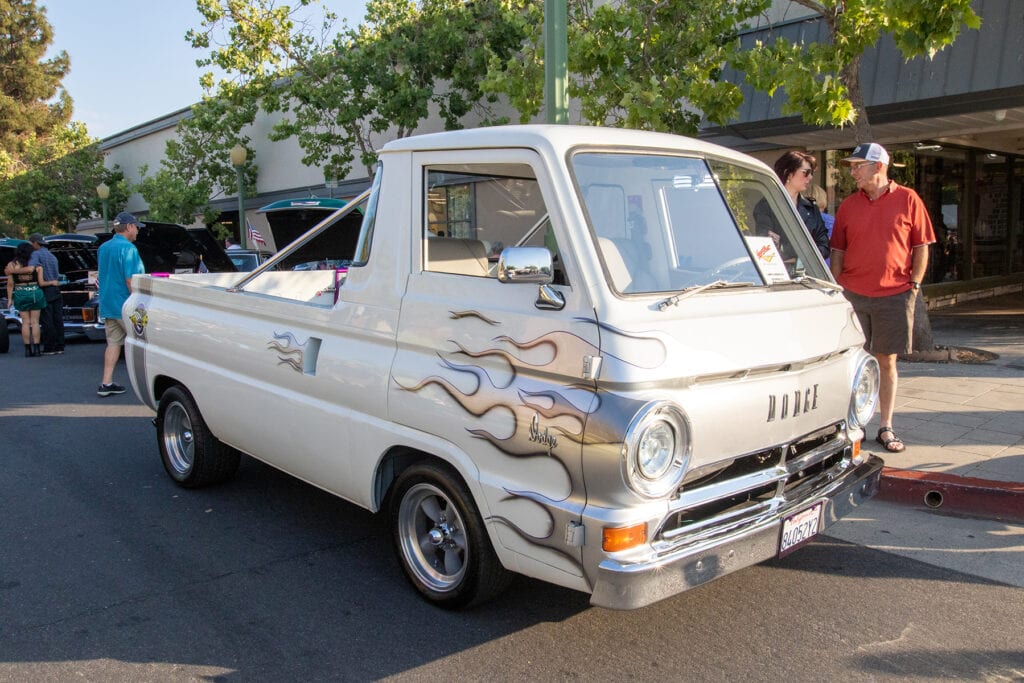 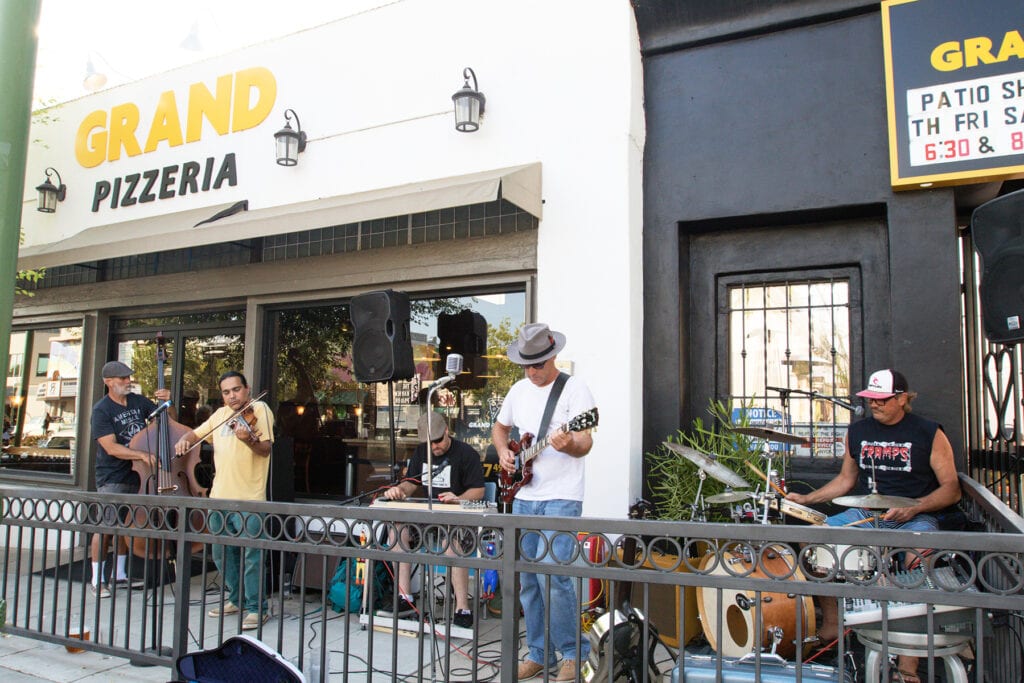 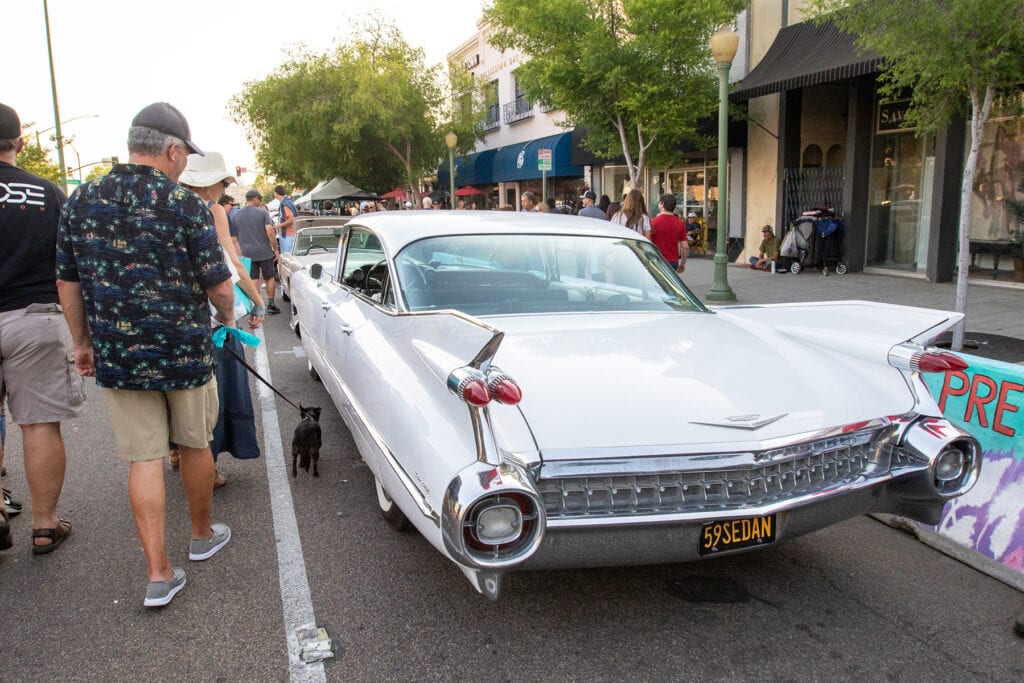 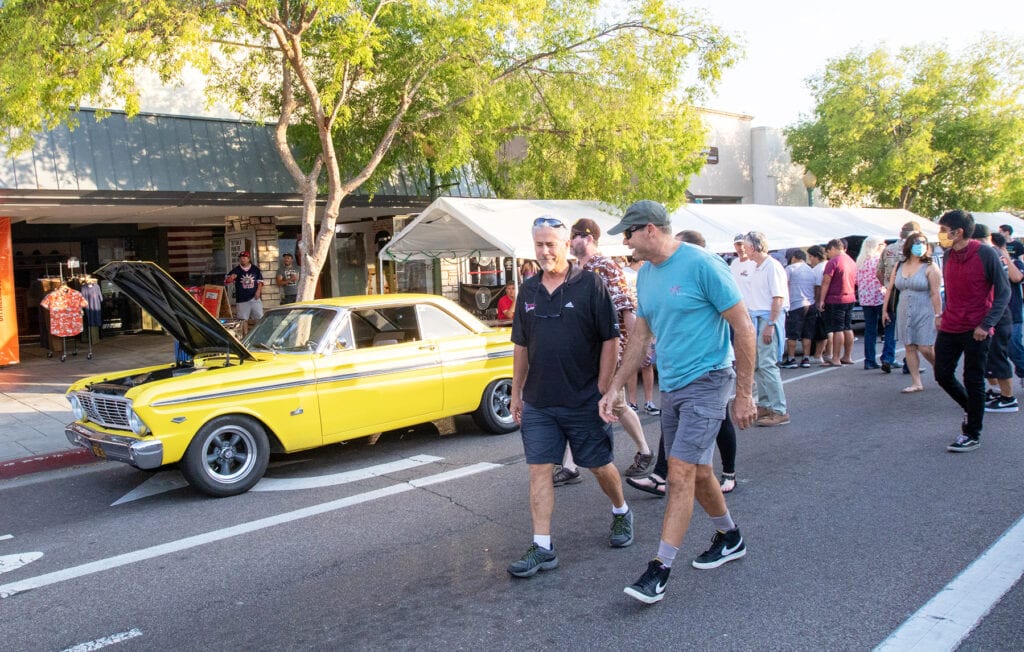 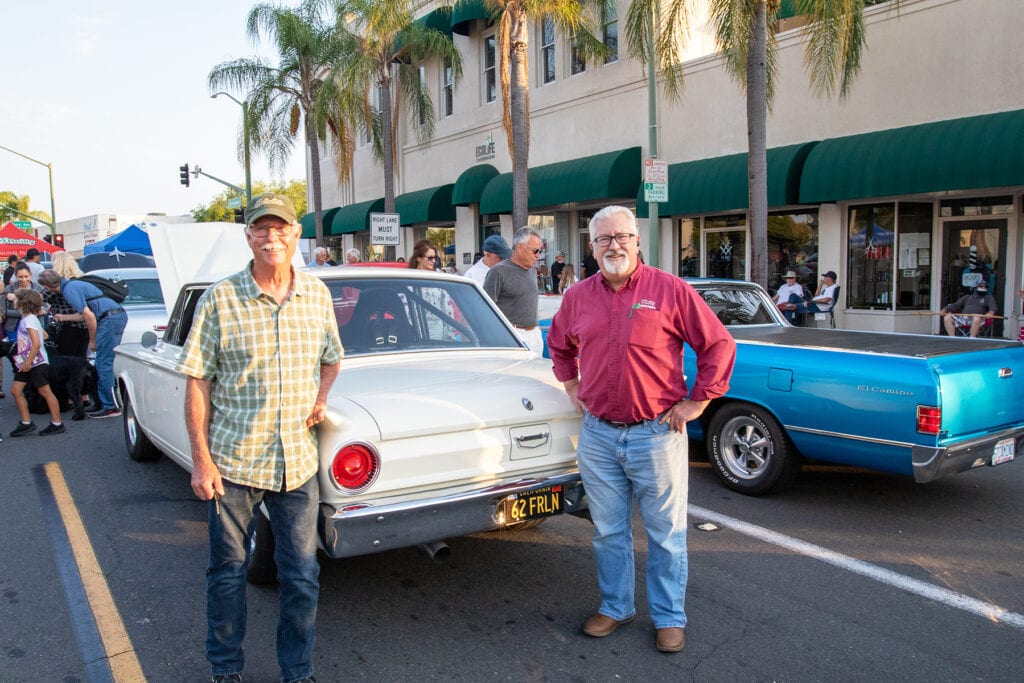 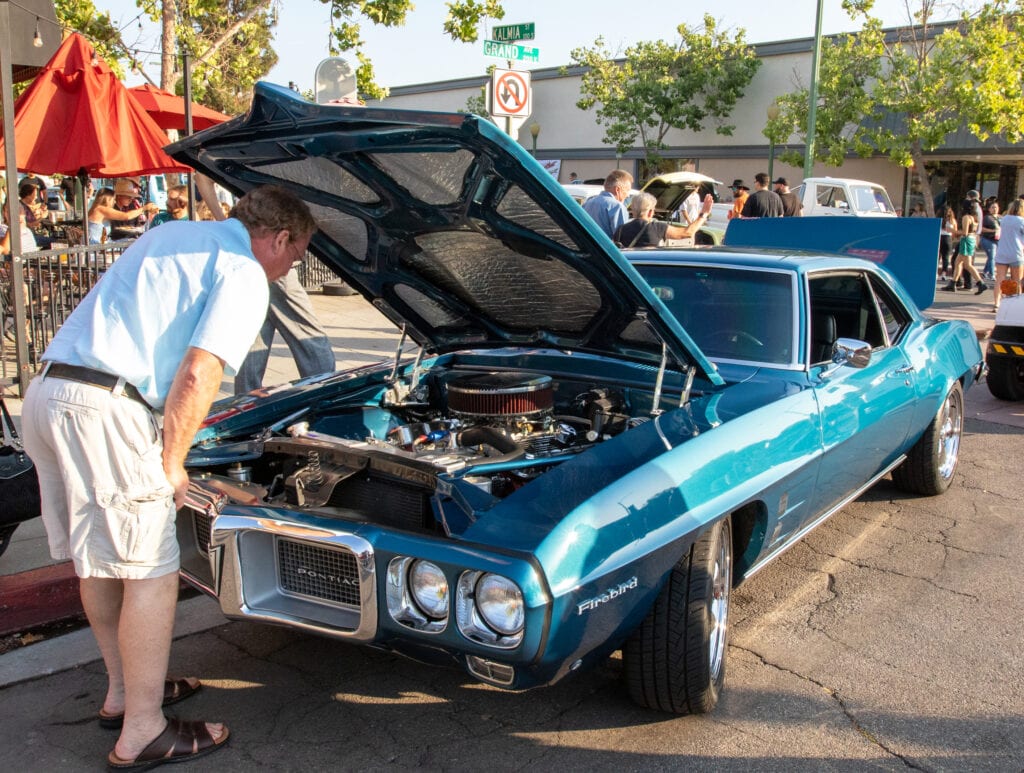 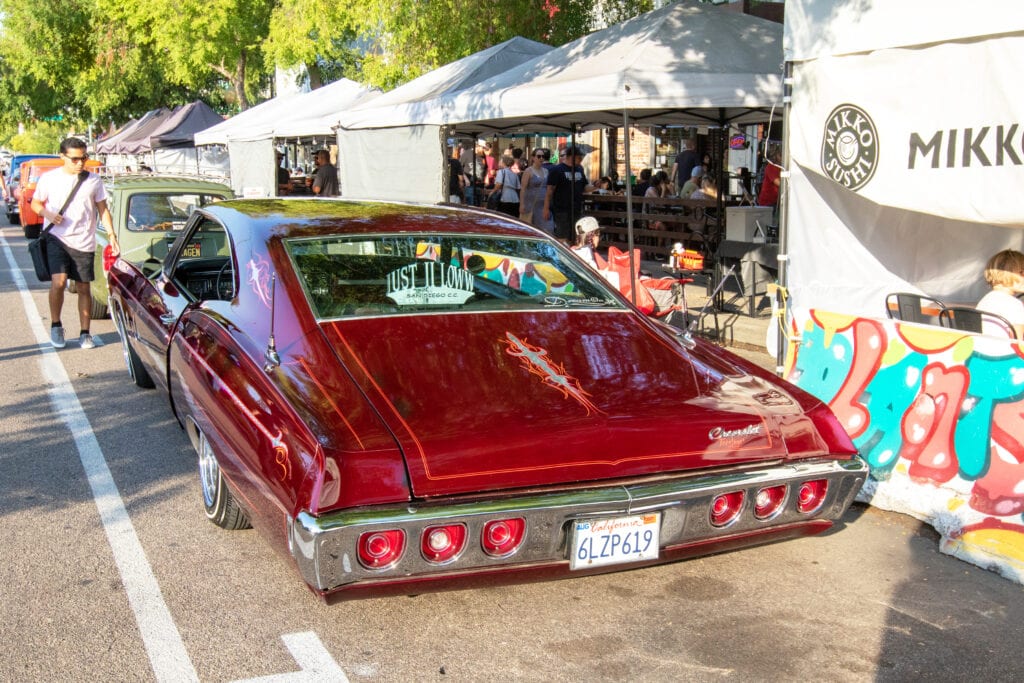 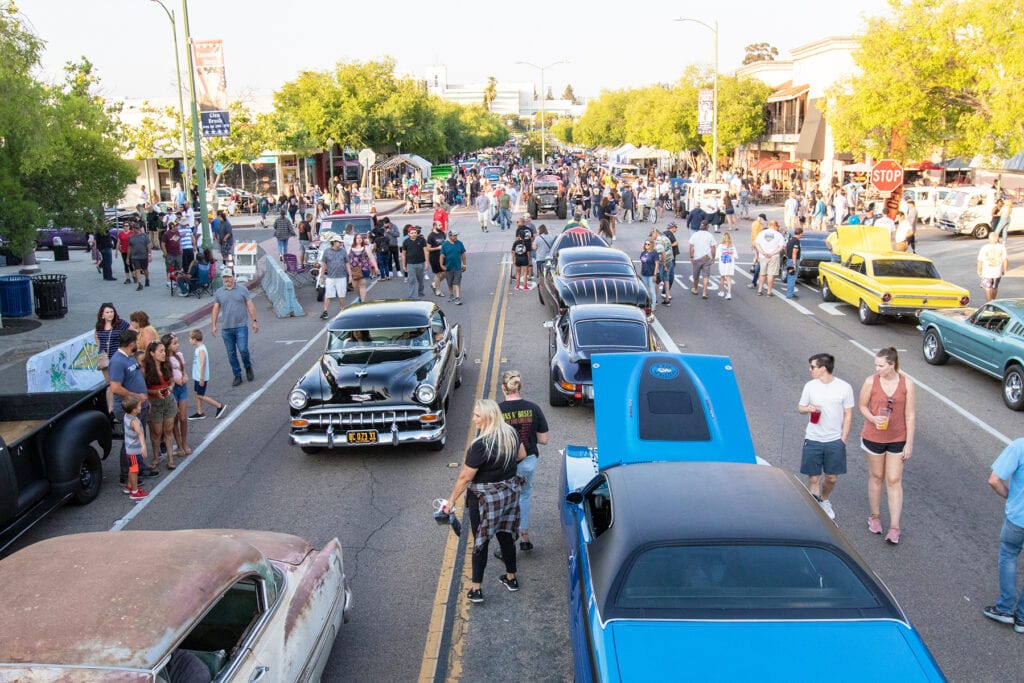