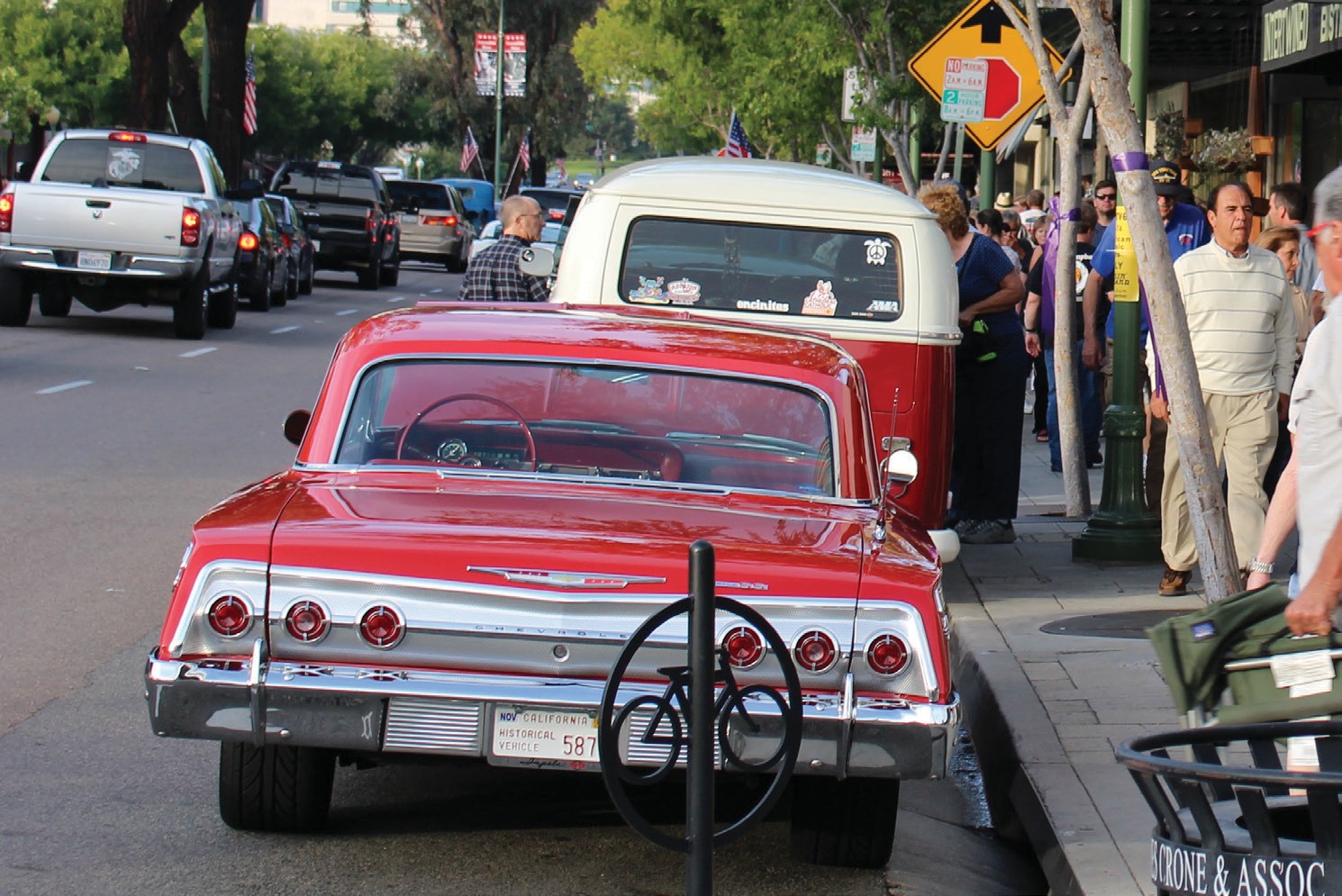 Opening day at Cruisin’ Grand is like opening day of baseball.

The organizers of Cruisin’ Grand have decided to cancel today’s event due to weather.

It’s gonna be huge! No foolin’!

The 17th annual Cruisin’ Grand Escondi­do will open Friday night, April 1 with 700 plus cars and Heaven knows how many thousands of people crowding the streets of the downtown area. They will be celebrat­ing “the days when chrome gleamed and fenders had style!”

The first Friday night of this 27 week cel­ebration of a uniquely American art form— that of the automobile—will run from 5-9 p.m., although the streets (North Juniper, Kalmia, Broadway and Maple) will be shut off by 4 p.m. Grand will remain open for cruising.

The 27-week event typically attracts 8,000 people per night, although some spe­cial nights, such as Nitro Night, when the festival finishes off with a loud roar, has been known to attract about 30,000. A to­tal of 250,000 are expected for the entire season.

“Opening day at Cruisin’ Grand is like opening day of baseball,” declared found­er Steve Waldron. The Times Advocate dropped in on Waldron at his Top End Tees shop on Grand. “It’s huge! It’s a big event.”

The hobby, Waldron said, “has grown such that there is even a TV channel devot­ed to it. It’s just a great part of our history. People remember when they were kids be­ing driven in those cars, or driving them. Each had personality and design, whereas today cars are cookie cutter.”

The cut-off year for the cars that appear in Cruisin’ Grand is around 1972. Before that America had a love affair with its big muscle cars, cars like the Mustang and the Camaro cars that had an art deco look and which, after World War II celebrated Amer­ica’s economic and cultural supremacy in the world. “They weighed five to six thou­sand pounds and most of it was chrome!” said Waldron.

“You’ll see Model T cars at this event. Think of it, a car that’s over a century old! Someone has lovingly restored these cars. People fine them in fields sometimes. That is the ultimate recycling. And here is a ven­ue for people who share them with love.

“It’s sometimes hard for someone who doesn’t work on them to understand,” he mused. “People love looking at the fin­ished product.”

As we were talking to Waldron, one of his buddies, Mike Dodge, came into Top End Tees. He owns a Boss 429 Mustang, and Boss 302, both high performance variants on the Mustang produced in 1969 and 1970.

“If it wasn’t for Steve and this event I probably wouldn’t have gotten back into the hobby,” he said. “Steve resurrected my interest in cars.”

Most Friday nights will have host clubs. This first Friday will be different, except for the fact that there will be reserved parking for the Willys auto club, which is a Cruisin’ Grand tradition. Willys Over­land 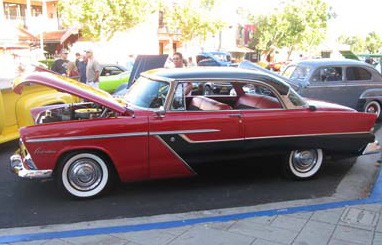 Motors, which designed the first Jeep for World War II—will be brought to Es­condido by the Willys Club of America. The Willys Americar was manufactured from 1937-1942.

They will be joined by the Good Guys club, fresh from a car show at the Del Mar Fairgrounds, (the Goodguys 16th Meguiar’s Del Mar Nationals). “When they are done they come over here,” Wal­dron said.

The event usually has its share of local VIPs. Often the mayor, Sam Abed, drops by, as does councilmember Ed Gallo. “We have council members from Poway show up because they are into cars,” said Waldron. “People come from Riverside County, Orange County and San Diego. I have had people from Chicago call who couldn’t wait. I’ve had several call who wanted to make sure they had the right night. Some people from the East Coast plan their vacations around this!”

If you are looking for live music, you’ll find it at Cruisin’ Grand every Friday night. Doug Deal organizes this aspect of the festival. “Doug has been fantastic!” says Waldron. “He came in one day and said, ‘I’d like to help you.’ ”

Because Cruisin’ has become such an iconic gathering, bands from the area vie for the opportunity to play there. Wal­dron estimates that this year 70 bands approached him about playing. “That’s amazing to have that many bands want to play,” he says.

There are always three bands and one DJ, each separated by enough distance that they don’t overlap. They are located at Maple, Kalmia and Juniper, with the DJ AT Broadway.

On April 1st the bands will be Baja Bugs, a Beatles tribute band on Maple Plaza; The Santana Brothers Band at Kal­mia; and the Del Rio Country Band at Ju­niper Park.

Each Friday there is also a hula-hoop competition where winners win a free ge­lato from Escondido Gelato.

“We will probably also have Mr. Ban­ner (as in Chris Banner, the Valley Center resident who drives a souped up “Batmo­bile” and dresses as the Caped Crusader),” said Waldron.

Each Friday night is sponsored by a dif­ferent local business and on that night the sponsor picks five cars to award prizes to. On September 23 all of the previous win­ners will be honored with a “winners circle.”

“There are five winners each night. We bring them to Broadway and they get to talk about their cars,” said Waldron. “We give them the opportunity to talk about what they did to put their car in that condi­tion. Then we take pictures and post them on the website. We had eighty-nine thou­sand hits last year!” That’s not bad for a website that is only four years old.

Which brings up A.J. Cataline, who handles the website. “He has taken that website and made it into a beautiful thing,” said Waldron. “A.J. is a car guy. Just like a lot of the people who help us put this on, his hobby is his passion. I’ve just been blessed with the guys helping me.

“Even the city gets into the act with their craft beer tasting event (see below). It just makes everything really easy when you have so many people who have adopt­ed this event. It’s not really me! I’m just a little cog in this big 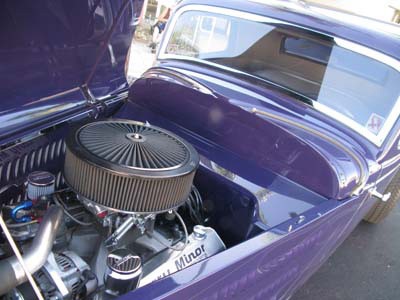 event. These people make it run, from the city guys who put out the barricades to the sponsors. I just can’t say enough about them!”

There may be some surprises along the way, as well, says Waldron. He has been trying for several years to get the Oscar Meyer Weinermobile to show up for the festival. It’s hard because students are re­cruited to drive it around the country and most students are out of school during the summer. “Maybe we will get the Weiner­mobile in May,” he said.

As always, Cruisin’ Grand is a free event open to all ages. The wine and craft beer tasting area will be located on the north side of Maple Street where attendees age 21 and over can sample some of the re­gion’s finest local wines and craft beer.

Tickets and information are at http:// visitescondido.com/3074/cruisin-grand/.

Some of the standout special days dur­ing Cruisin’ Grand are discussed below. We will have articles on other events in subsequent editions.

April 15, Hot Rods and Custom Stuff of Escondido will be the sponsor.

May 13, Escondido High School Re­union will celebrate their annual event at Cruisin’ Grand. “This has become a huge event within a huge event,” says Waldron. “Hundreds of people show up.”

May 20, Panteras, Cobras and Mus­tangs. This is the real deal and some­times there are some very special cars to see. Two years ago the event featured the very first Mustang to roll off the factory to commemorate its 50th anniversary. An­other year it featured the only remaining “K” Code Mustang.

June 10, The “Over the Hill Gang,” a large club based in San Diego and Riv­erside counties, will bring their pre-1959 cars to Escondido.

June 24, will be the Packard Grand de Elegance, featuring the classic Packard automobile.

September 9 will be Fire Truck Night when members of the Firefighters Assn. will give rides up and down Grand. “We get trucks from Los Angeles and Riverside who come to the event,” said Waldron. Many restaurants in the downtown area will be open later for business on Friday nights. Waldron talked about his fascination with classic cars. “I was raised at South­ern California drag strips and raceways. It got into my blood. Cars are such a part of the great history of this country. The people involved with these shows are so good and so giving and great to be around. It’s a pleasure to be around them,” he said. “This event is not possible without the great support of our many sponsors.”

The Times Advocate will bring you reg­ular updates of the festival in each issue, but you can also find out a lot by visiting cruisingrand.com