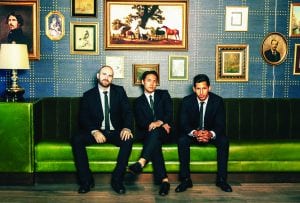 The classic crossover trio Simply Three is made up of musicians whose sole goal is to inspire a new generation of soulful string artists. The group continues to grow in fame and will be making one of two Southern California stops at the California Center for the Arts, Escondido’s Center Theater on Sunday, October 22 at 4 p.m.

Simply Three’s old school training has only enhanced their new school sound, combining classic strings and modern hits that have propelled the trio into Internet stardom, and real world acclaim. The Boston Philharmonic said of Simply Three “[They] have what it takes.” While the Phoenix New Times takes it step further, “[Simply Three] transposes pop bombast into joyous string music in artful fashion.

The group’s exciting sound has enjoyed by hundreds of thousands of viewers on YouTube, HuffPost, RyanSeacrest.com, and many more. They’ve breathed new life into instrumental music and everyone from Coldplay to Janelle Monae has taken notice.

This fantastic evening of classical sounds with a modern twist will appeal to all ages. The Center is located at 340 N. Escondido Blvd. in Escondido. The Ticket Office can be reached at 800-988-4253. Tickets can also be purchased online. To learn more, including performance dates, times and ticket information, visit artcenter.org.